Day Two in the Kalahari

Because our game drive was not until 4PM, the next morning we slept late, had a leisurely breakfast, and afterwards decided to drive east from Stampriet to see if we could locate some of the Kalahari dunes and take some photos. The majority of land in Namibia is privately owned so being able to position yourself to take good photos of the Kalahari in this area unfortunately requires access to private land. Nevertheless, we drove for a while just to understand how the Kalahari runs throughout this section of Namibia.

The Kalahari Farmhouse is just at the edge of the village of Stampriet. The land around Stampriet is a highly productive agricultural area because of the luxury of water from artesian springs in the area. Citrus is grown here as well as large fields of vegetables.

Driving east from Stampriet toward Leonardville, the landscape is dry and somewhat bleak simply due to the monochromatic vegetation. Though to be perfectly fair, spring is underway in Namibia and there is periodic green in the landscape where two months before, all we saw was grey and tan. Given that there has been virtually no rain since early in the year, the flowering trees and shrubs that are greening up now must be mega-adapted to the desert climate they inhabit in order to put out flowers and leaves without so much as a drop of rain as encouragement.

This is the look of the road from Stampriet to Leonardville.

Actually it’s a pleasant region of rolling hills – the hills are the linear dunes of the Kalahari which run north-south and the valleys, the inter-dune expanses. Unlike the dry sand dunes of the Namib, the Kalahari dunes, which actually receive seasonal rains, can support vegetation. 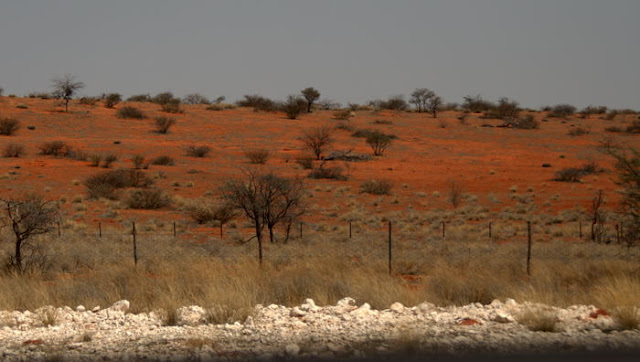 What was amazing to us is that given a little water, a lush landscape as at this farm can emerge in the midst of this desert. 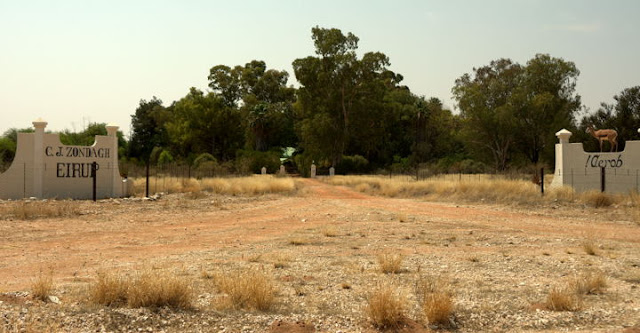 Here is the view just across the road from the farm (sans water).

We continued our drive but the landscape never really varied so we decided to head back to the Farmhouse for lunch and some relaxing around the pool before the game drive. 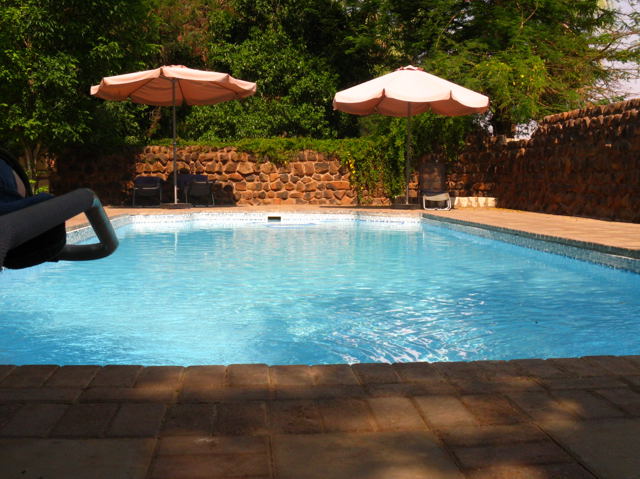 Apparently this is just the time of day that everyone relaxes around the pool. 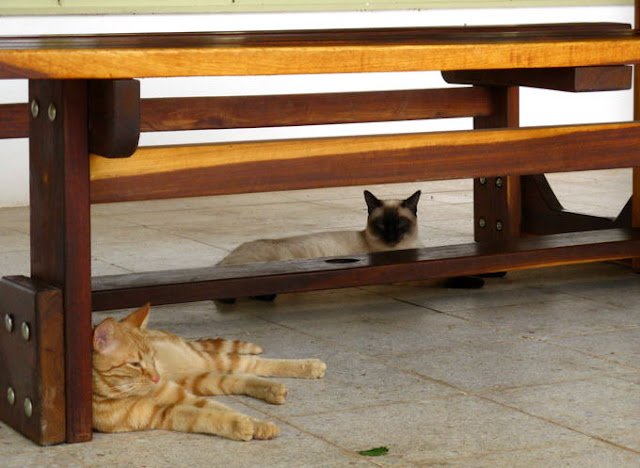 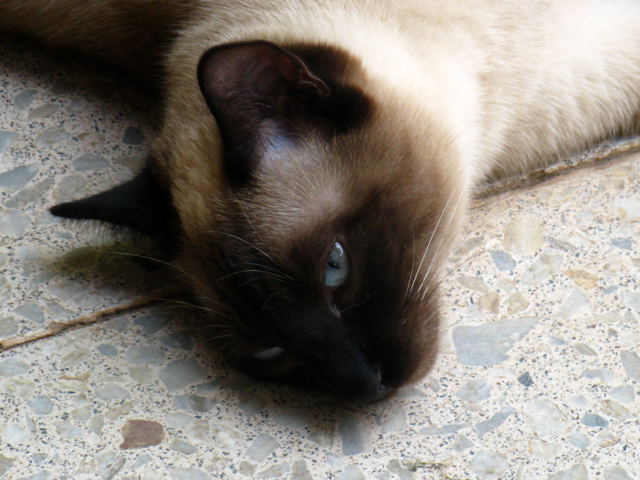 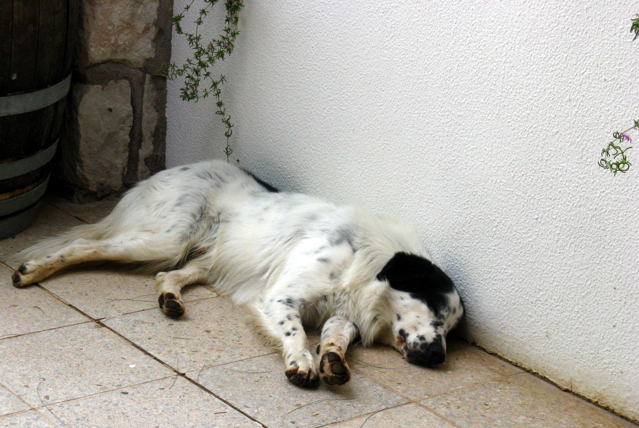 Our game drive was a sundowner excursion across the Gondwana Collection’s private land surrounding its Anib Lodge, located about 40 km or so west of the Farmhouse. Once everyone had been sorted out (common phrase here) into three game vehicles, we took off through the desert. 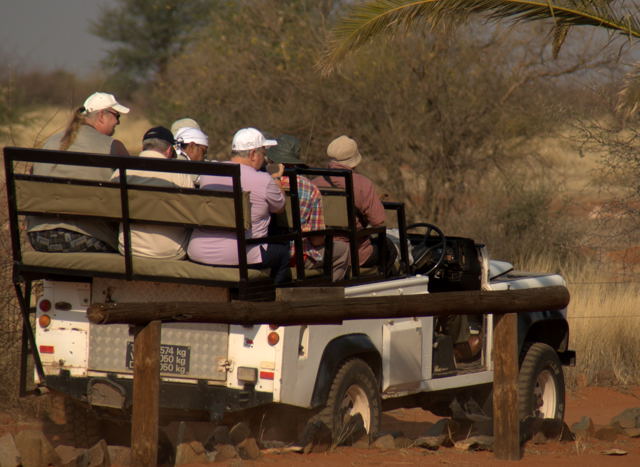 It was a beautiful late afternoon. There was welcome scattered cloud cover to temper the heat and cool air moving through the depressions between dunes, making for a beautiful drive through the dry river beds and surrounding dunes. 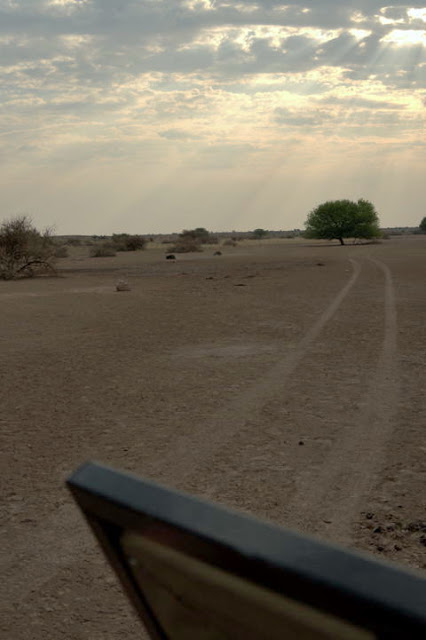 Among the smallest game we saw were sociable weavers who build these giant condominiums in trees and on telephone poles throughout their range in Namibia. 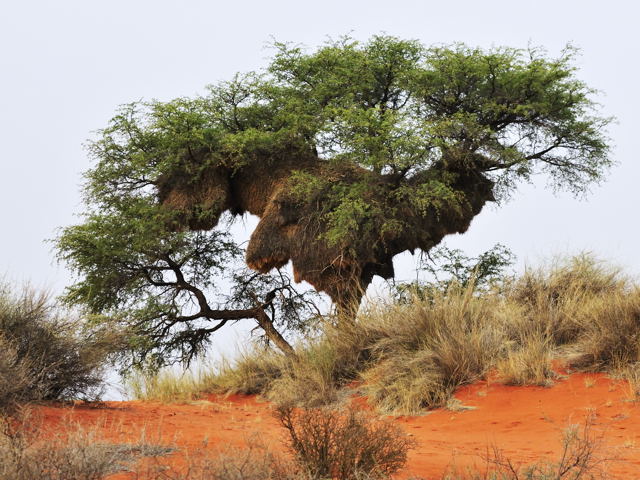 Our driver said that the male weavers (who build the nests) size up the trees before they begin to build in order to secure a very strong branch on a very strong tree.  If they don't find one to their liking, they build on very strong telephone poles!   Apparently you don't want to stand under a weaver nest like this one because there are Cape cobras who visit the nests to eat eggs and birds and one can simply drop on you (cousin Connie's and my worst nightmare). Pygmy falcons which are small enough to enter the nests also live there.  They do not prey on the birds in their home nest, but go to other nests to make their kills.

The sociable weavers' nests are frequently built in acacia trees.  The leaves and seed pods of the acacia tree are prime food sources for all the grazers.  According to our driver, In order to not be completely stripped of leaves, the trees have adaptations that allow them to quickly alter their leaves to make them unappetizingly bitter-tasting to the antelope and giraffe.  When their leaves are being grazed, the trees can also emit a chemical signal of some sort that floats through the air to neighboring trees, alerting them to make their own leaves bitter and thereby conserve the food-producing apparatus of the trees.

We did see giraffe, springbok, steinbok, oryx (gemsbok), ostrich, and wart hogs on the route but because of some technical problems with our lenses and decisions about who was to take video and who was to take still photos, we ended up with very few usable photos for this post.

The obvious star (yes, of course that's a pun) of this drive was the sunset. The game vehicles arrive at different vantage points throughout this stretch and set up drinks and snacks on metal tables that are already at the view points waiting for a vehicle’s arrival. Our driver set up a generous array of drinks and folks milled around chatting, asking questions, and just enjoying the sunset. 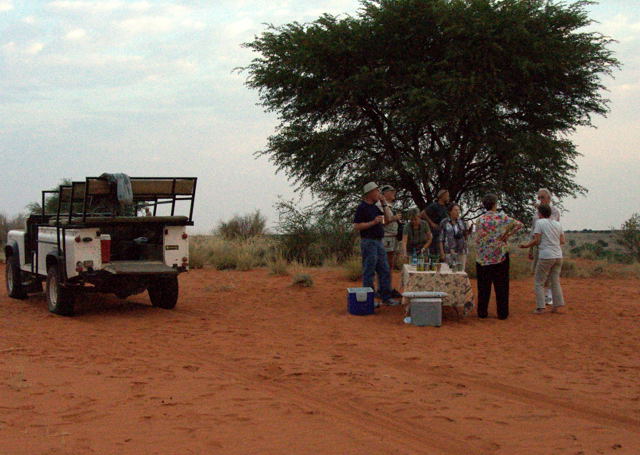 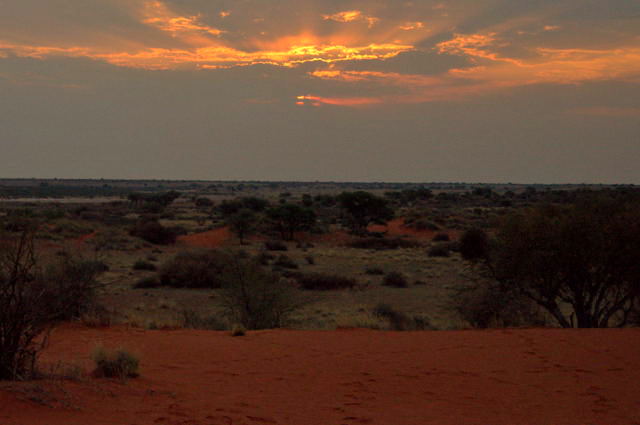 Once the last thin arc of glowing sun dipped below the horizon, it was time to head back to the Lodge and then on to the Farmhouse for dinner. Our last dinner there was at candlelit tables on the lawn with a selection of tempting entrees on offer. 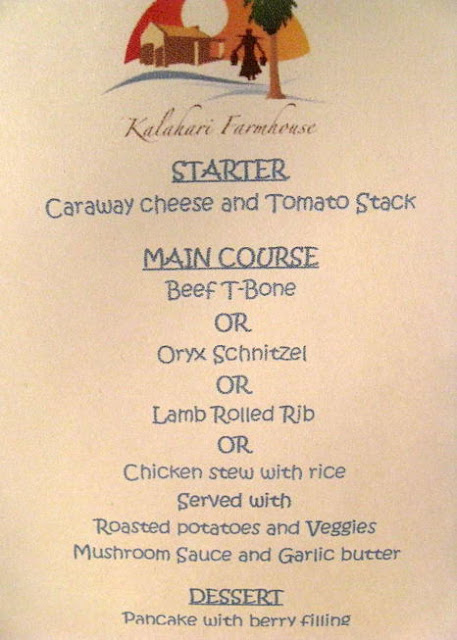 Such a hearty dinner made for sound and peaceful sleep.

Following a shady patio breakfast the next morning, 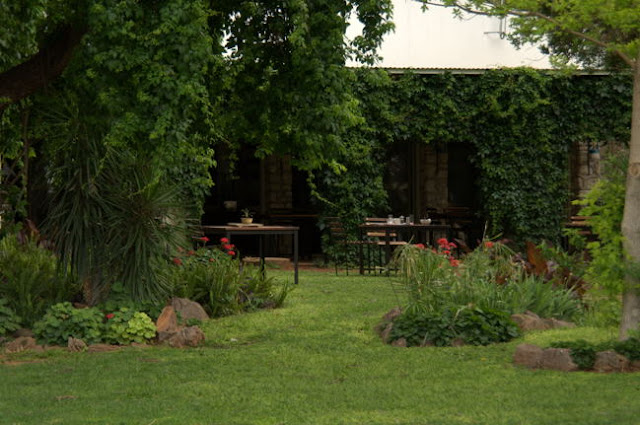 it was time to head back to Windhoek.

We lingered a bit for a few more rounds of fetch 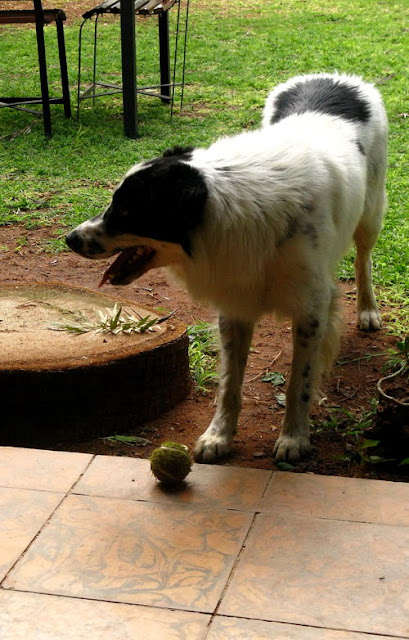 but soon enough we had to turn in our key 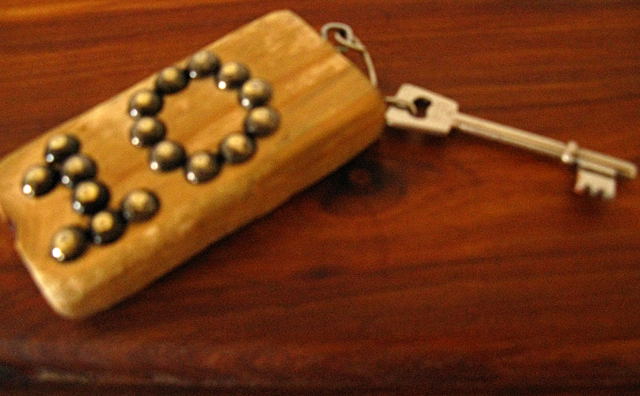 and say our good-byes. 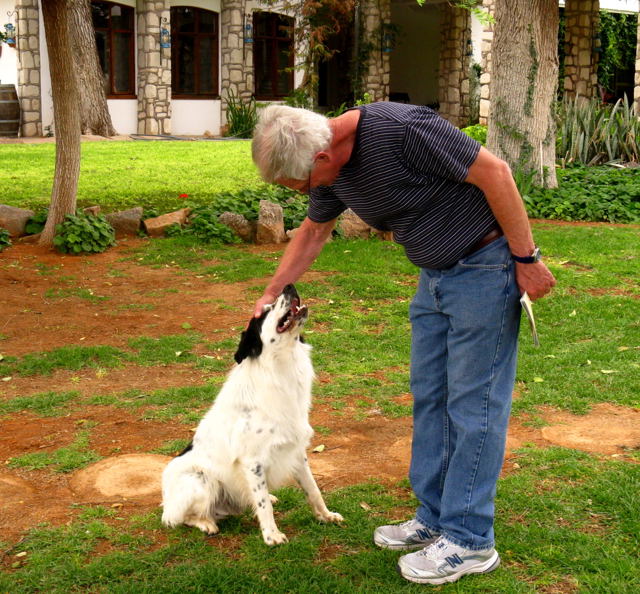 We want to come back sometime later and see the Kalahari cloaked in summer green. And it will be really good to see Casper again.
No comments: