We spent three days exploring Etosha. When we got to the Okaukuejo entrance on our first exploration day, we asked the attendant at the gate if there is always this much haze. He answered with, “where?”. That pretty much told us that either there is no real translation for haze or no one was really seeing it as something apart from the usual.

Since the park’s roads are all gravel, the going is slow, not only because of the condition of the gravel but because it NEVER rains this time of year and the various cars, busses, and game vehicles stir up a tremendous amount of dust in the park. We still had no explanation for why there was haze all the way from Windhoek to Etosha but figured we were unlikely to get an answer for that one.

We set out for waterholes marked on the map that we bought just inside the gate. Not much in the way of information is given to you when you enter the park so buying a map or guide of some kind is the only way to navigate half way intelligently. There are concrete markers at points along the way giving distances to the named waterholes and for the most part they were pretty reliable. We were told however that some of the markers get moved by elephants so that the arrows point in the wrong directions. Elephant humor – you gotta love it.

I had read that Halali (about ½ way across the park) was the place to see lots of bird varieties so we decided to check it out. However, going about 74 kilometers to get there on wash-boarded gravel roads takes some time indeed, especially as you are constantly distracted by sights like these and the compulsion to take 30 or more photos of everything you see. 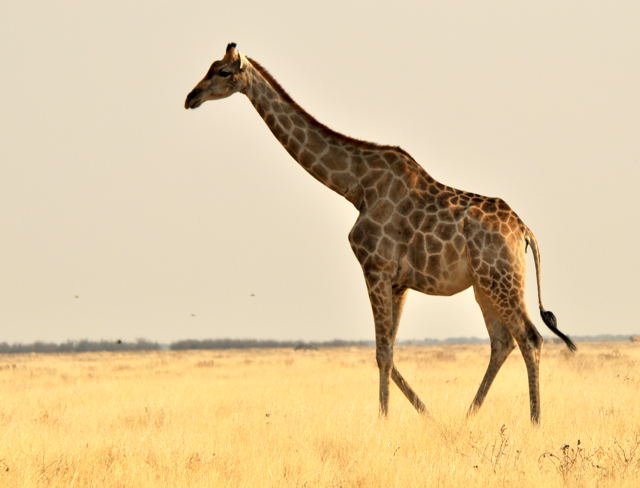 We stopped at a few waterholes along the way to Halali. Waterholes in Etosha are either natural seeps from underground springs or man-made waterholes where a borehole has been drilled and solar pumps bring the water up to the surface. During the dry season, the animals really have no place else to go for water but to the waterholes. That makes it a great time to visit because you are greeted with this sort of tableau at most of the waterholes.

Alluring as it all was, it was going to take us most of the day to go to Halali and back before sunset when the park closes. They really mean it when they say it closes at sunset. If you are not staying at one of the rest camps in the park, and you don’t make it to an exit, you will spend the night in your car. It is forbidden to leave your car at any time except at the rest camps and very few other spots that are few and far between.

After a long stretch of wash-boarded gravel roads at about 20-30 MPH, we finally arrived at Halali Rest Camp. We were so anxious to get out of the car and walk; but after a quick ice cream bar, we took off for the waterhole to see what might be there. Unfortunately we arrived about mid-day and this was the view. 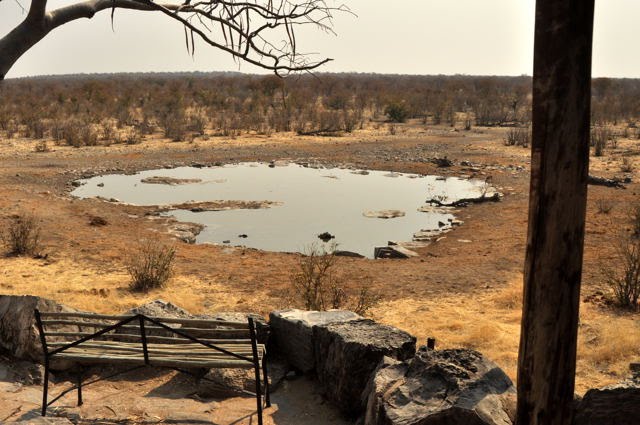 A few Helmeted guineafowl showed up for a quick drink but not much else. Halali’s waterhole is floodlit at night so if you are staying at the camp, you can watch the changing animal arrivals from day to night. The sedimentary rocks around Halali are completely different from the lighter ones we saw in other sections of the park and are quite beautiful. I have seen African fabrics with these same motifs on them. 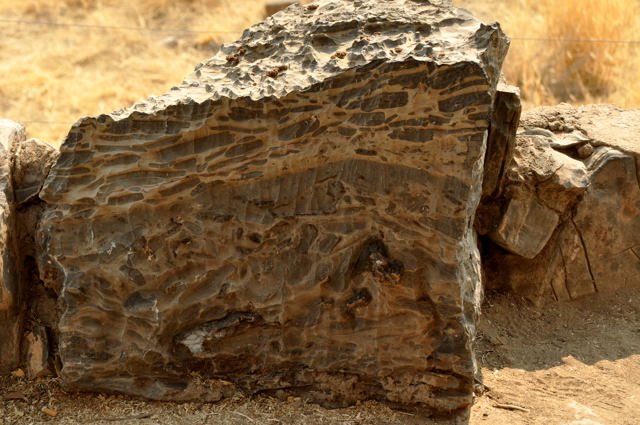 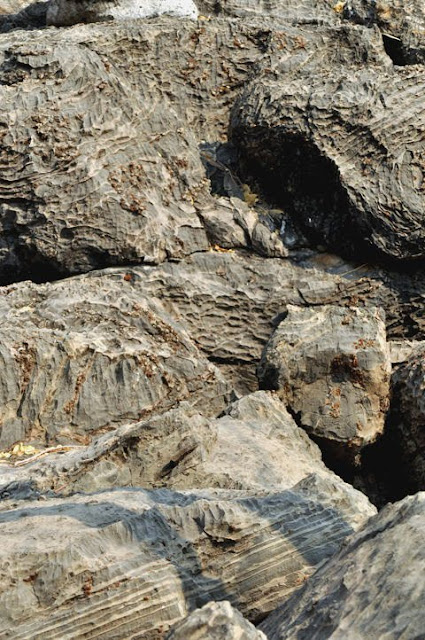 Mid-day is never any good for us when it comes to birds. A knowledgeable ornithologist member of our family tells me that birds are usually resting that time of day. We did get to see these beauties near Halali and on our way back to Okaukeujo however.


We made a pretty straight trip back to the gate, with few stops except for stopping where we saw a group of other cars stopped and looking into the bush. About 20 feet or so off the road two cheetahs were resting in the shade of a tree. 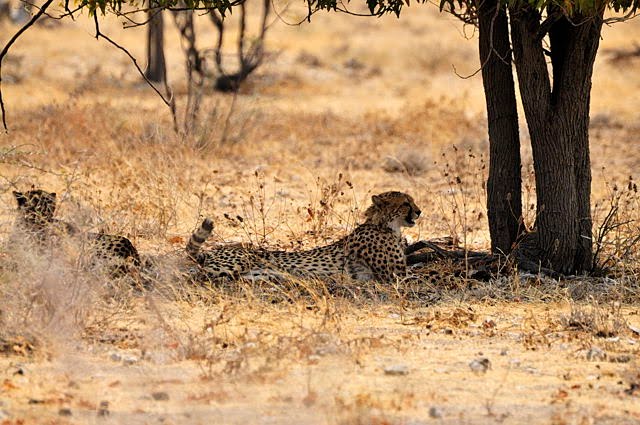 We were lucky to see them. Our brochure says only 85 or so cheetahs live at Etosha.

As we continued on, we made the decision en route to book a game ride the next day and leave the driving to someone else. Here’s a glimpse of what the skies and gravel roads look like throughout Etosha. When it looks like this in Albuquerque, the sky is about to open up, but this is nothing more than the ubiquitous haze we’d been seeing all along, albeit heavily laced with Etosha dust. 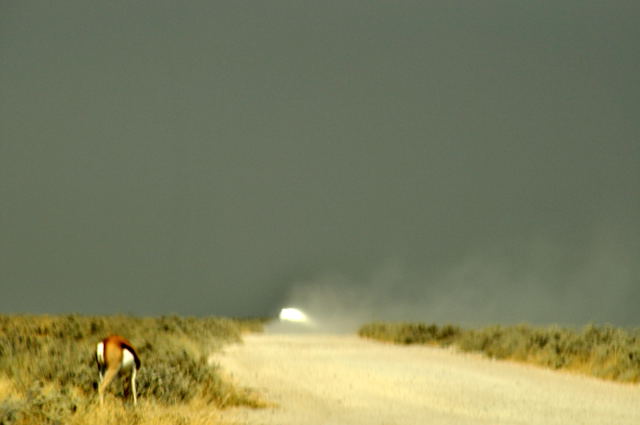 We made it out of the gate just before sunset and were happy to head back to the Lodge for a relaxing dinner on the patio. On the way back, however, this guy just couldn’t resist the camel thorn blooming throughout the thornveld on either side of the road. The blossoms (and ostensibly the thorns, too!) are his favorites. He was just off to the side of the road and was totally unfazed by our stopping to take his picture. It made a wonderful end to our day. 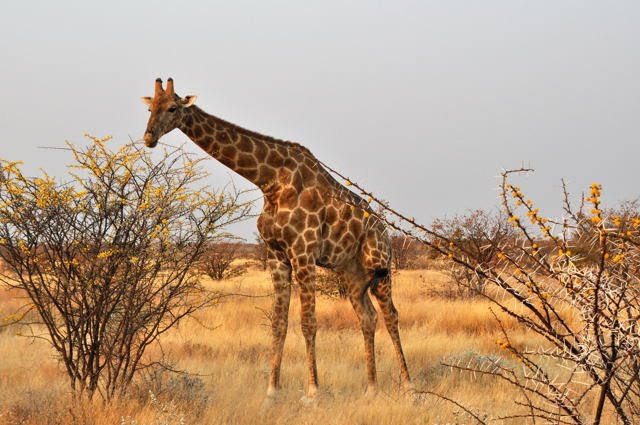 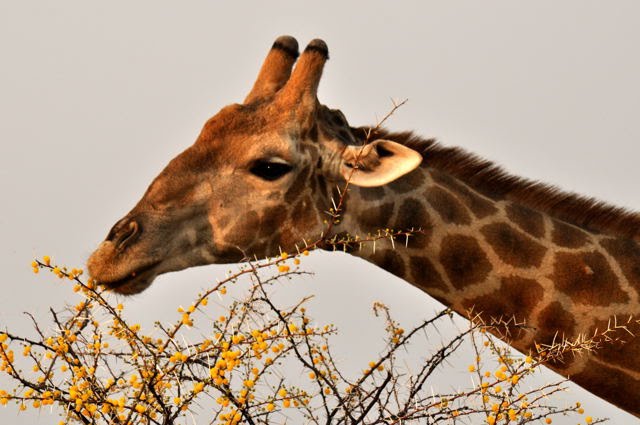