In The (Not So) Still of the Night

We have become accustomed to living in the center of a city with all its attendant noises. The nice thing about Windhoek is that the city center is small and for the most part quiet during the night. The trains do come through regularly though and they are very loud. There are also people out drag racing cars and motorcycles in the wee hours and from the sound of it, probably running the lights in the major intersection below our windows. There are the always startling sounds of car brakes screeching to a halt but hardly ever the sound of automobiles colliding at the end of the screech, which is amazing to us, given how loud those brakes are. And there are these giant, very loud, 26-wheeler trucks coming through the intersection. They are so heavily loaded the professor once counted that it took 6 gear shifts for a 26-wheeler to clear the intersection!

OK, so I guess I take that back….there is a lot of urban noise in Windhoek city center, even at night. We must have gotten used to it though and usually sleep through it even with our windows wide open.

That was not the case on the night of November 30-December 1, however.

Additional floors are being added to a shopping center just across the major intersection from us. Concrete is poured during the night because it is so hot here during the day and concrete trucks cannot get reliably through daytime traffic to ensure just-in-time concrete deliveries to the pumps. Everything works better during the cool quiet of the night. Turns out pouring concrete for the floor of a giant section of building is noisy business. 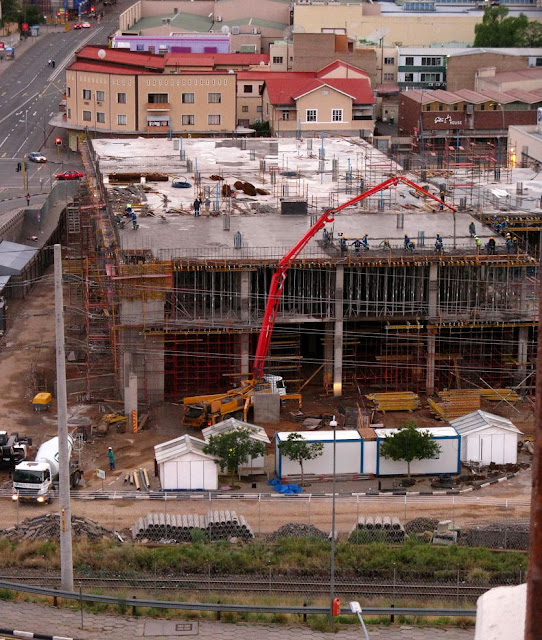 Every half hour a rumbling concrete truck arrived just as another left. The pump sounded continuously and workers yelled to one another throughout the entire process. We slept fitfully that night.

Then at about 4:30AM, we heard a loud, prolonged screeching of brakes, this time followed by the very definite sound of a collision. A small VW Rabbit-sized sedan and a big single cab pickup had collided —the sedan coming to rest in the middle of the intersection and the pickup deposited on a median a number of yards away. At the sound of the collision, we rushed to the window that overlooked the accident just in time to see one driver running away from the scene and the other chasing after him. People in our building had come out on their balconies, some yelling, “NO!”, others yelling, “Catch him!”.  As the two running figures disappeared into the darkness, those of us on our balconies found ourselves looking down on a spooky quiet accident scene: yellow street lights illuminating the abandoned vehicles standing where collision forces had placed them, their doors still hanging open. About the time the thought that we should call the police entered our minds, we could see the two figures walking back to the scene. Once they got in view of the cars, they began yelling at each other anew and one even slugged the other a couple of times. Some fast thinker must have called the police because a lone patrolman in his police vehicle arrived just then. There seemed to be an orderly, but lengthy discussion between them that lasted until about dawn.

Eventually, tow trucks arrived along with an ambulance (which didn’t appear to be necessary). 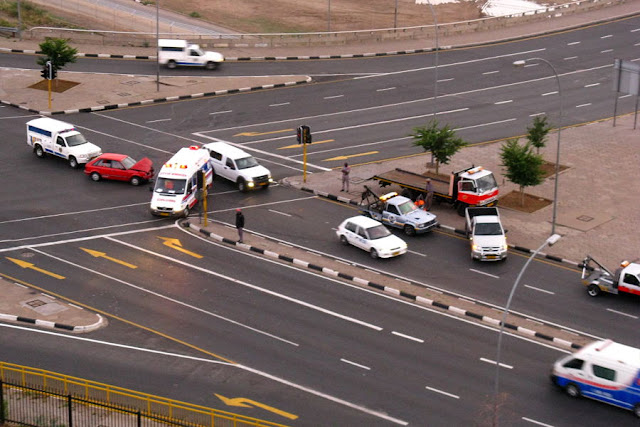 Just before the tow truck started to hoist the sedan, we could hear the scratching of the policeman’s chalk on the pavement as he marked the spot the car’s tires had come to rest. There was not much more than that in terms of investigation. There were no photos taken, no flashing police car lights, no multiple policemen measuring and recording. I couldn’t help but wonder what would become of the chalk marks once the high volume traffic through that intersection had its way with them. I don’t know what happened to the two drivers. The morning rush (which starts really early) overtook the scene and I lost track of them.

Once the vehicles were cleared, 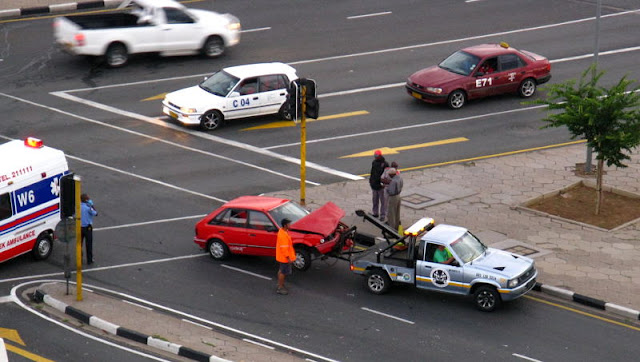 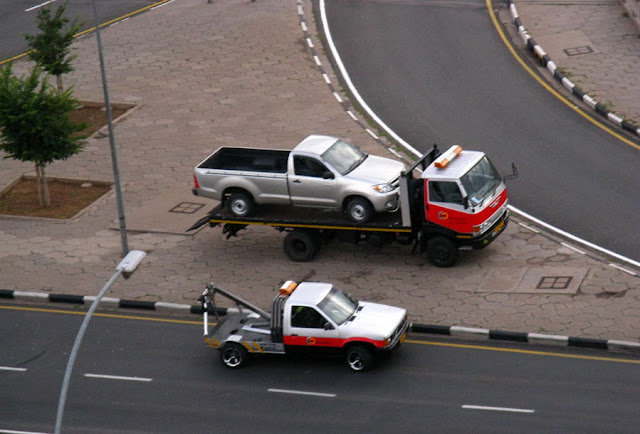 traffic flow through the intersection remained unimpeded throughout the rest of the day.

That evening’s sunset ushered in a new night in the city center, 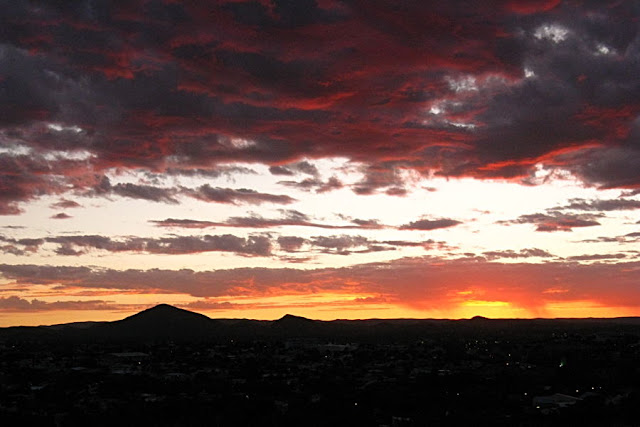 one that proved to offer nothing but peaceful nighttime stillness (relatively speaking).
1 comment: