Because we were staying at Namibian Wildlife Resorts’ campground at Sesriem, we were permitted entrance into Sossusvlei before dawn to see sunrise from the dunes. Not bad for the first day of 2011! We drove toward Sossusvlei in pre-dawn dusk 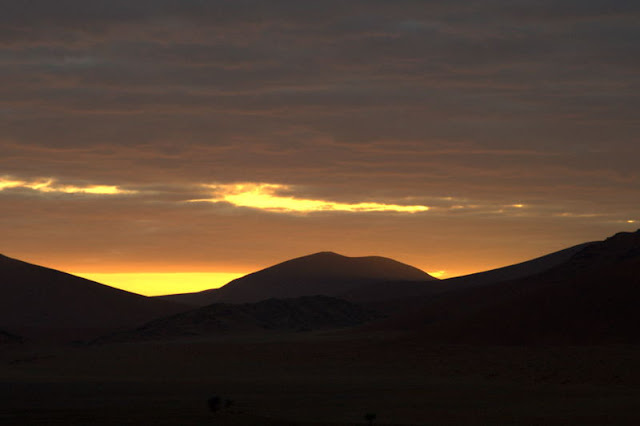 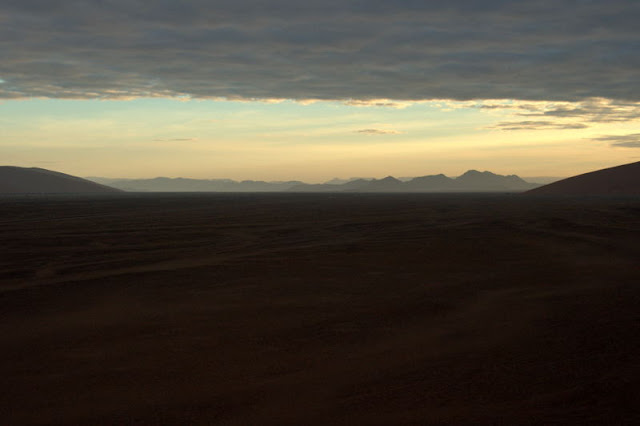 making it in time to for most of the family to see sunrise from atop the dunes. My back wasn’t cooperating well enough for me to get to the top of the dunes that morning so I stood guard over hiking boots left behind 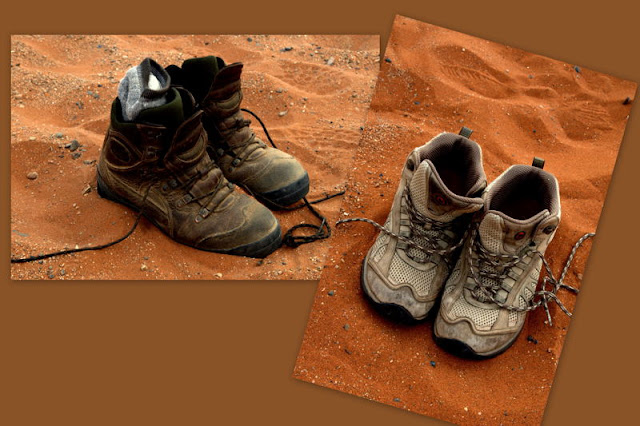 and amused myself taking my own brand of photos. 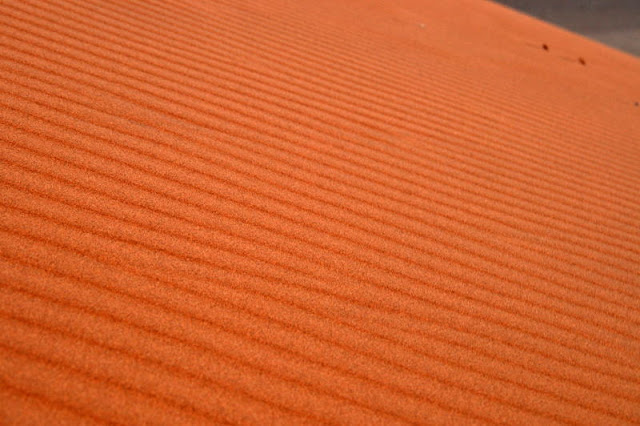 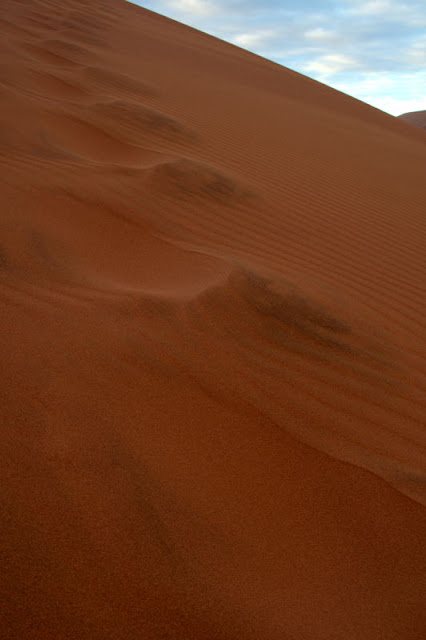 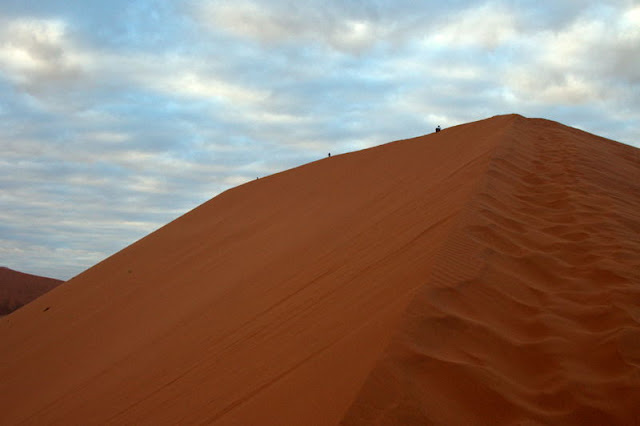 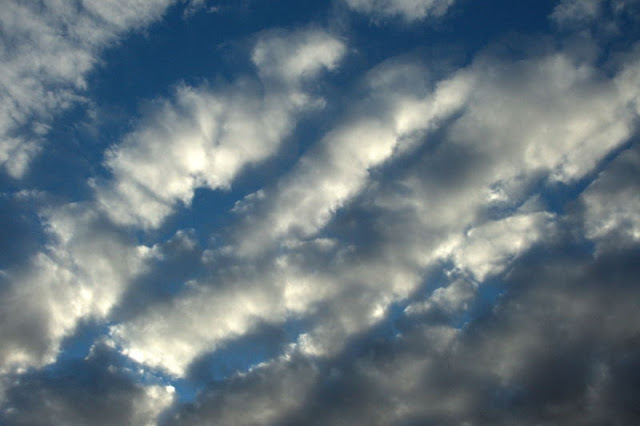 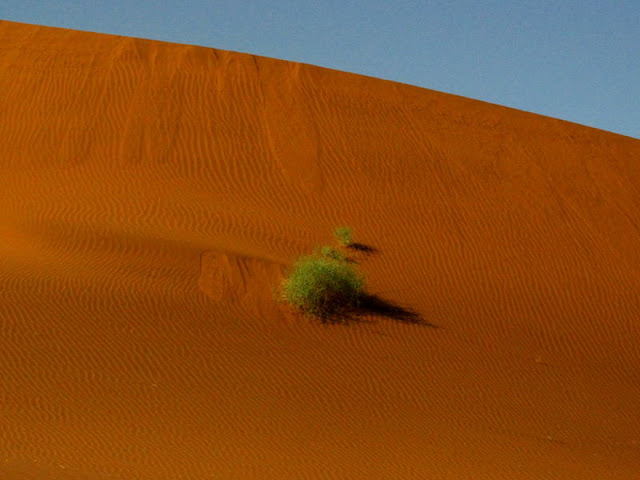 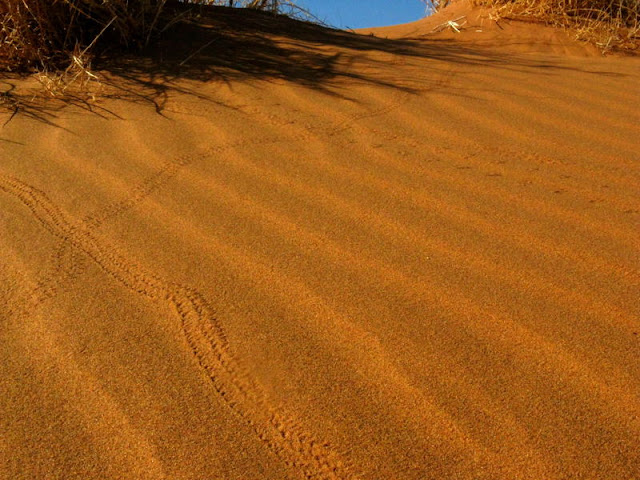 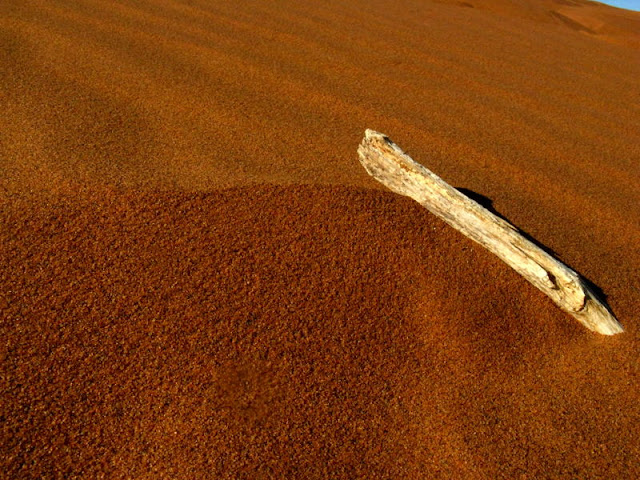 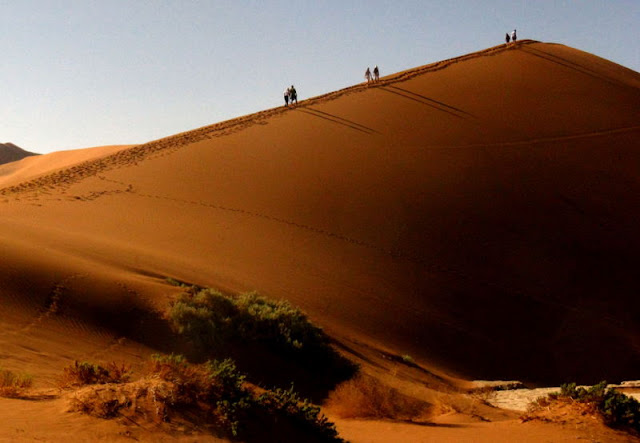 Once the sun was up, it was already getting hot and the avid photographers (the professor and our daughter) were anxious to get to Dead Vlei to photograph the iconic dead camelthorn trees there.

To get there, we drove further into the park and then had to drive about a mile or so in loose sand that was about a foot deep. 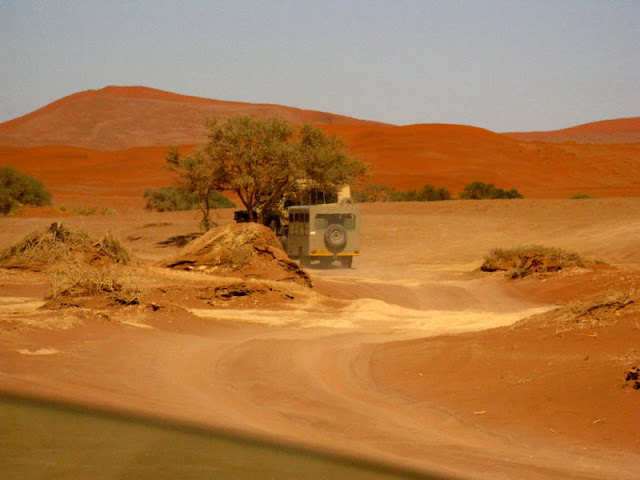 We had already received expert instructions on sand driving from some friends in Windhoek (thank you, Tula, Martin and Noel!). We passed those gems on to our son who drove the sand as though he had done it many times before.  I did notice however, a certain rigid set to his jaw and a few white knuckles gripping the wheel suggesting the smallest hint of apprehension, but it faded quickly to exhilaration once we arrived without incident.

By the time we reached the parking area to hike to Dead Vlei, it must have been nearly 100 degrees Fahrenheit and our nifty Golite reflective hiking umbrellas were welcome shady relief.  I got to here on the hike into Dead Vlei 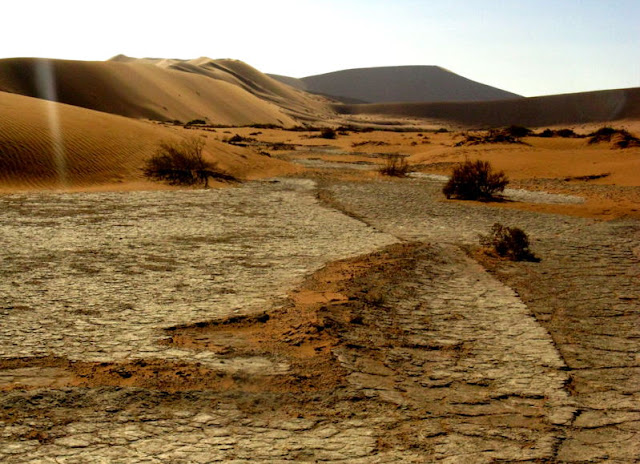 and once again, my back did not want to comply so I opted to go back to the truck and wait for the others.

Despite my telling him that I would be just fine and to not worry about me, this is a photo of my son saying something along the lines of, “Mom, are you sure you’ll be okay? You know how to operate the keys, right? Don’t forget there are cold drinks in the refrigerator. Be sure and run the air conditioner as much as you want, okay?  We have plenty of fuel. You’re sure you’ll be okay?” 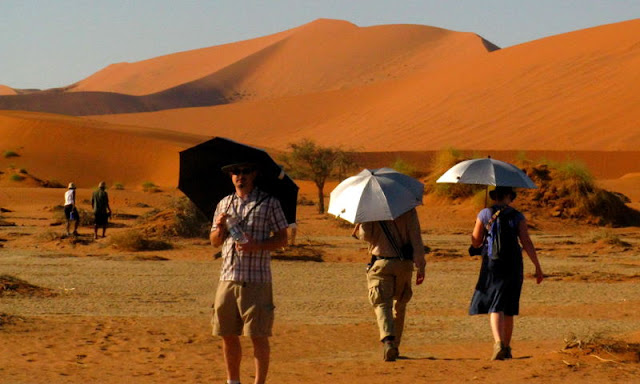 He has zilch faith in me.

I got back to the truck, rigged up, if I do say so myself, a dynamite improvised sun screen that blocked all the reflective heat, opened truck windows to get some cross ventilation, and was perfectly cool without the air conditioner. While I waited for them to get back, I amused myself taking my own photos, 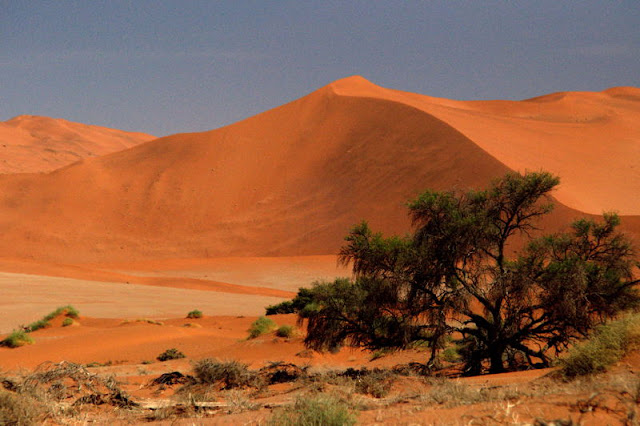 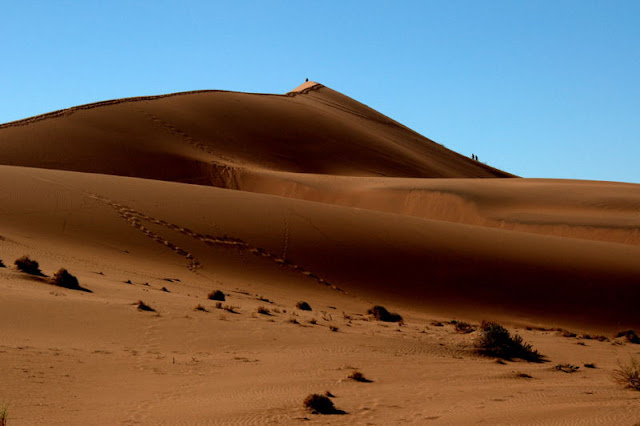 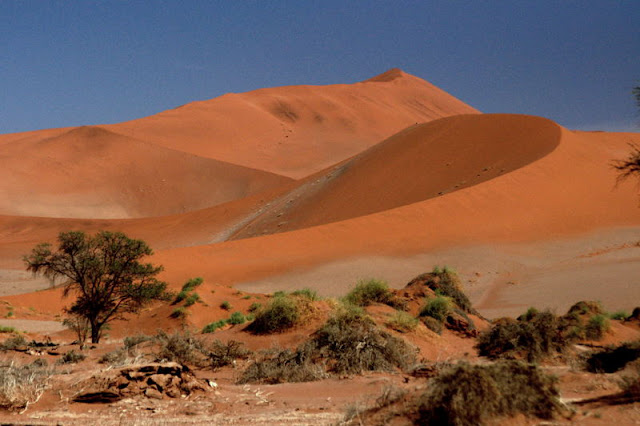 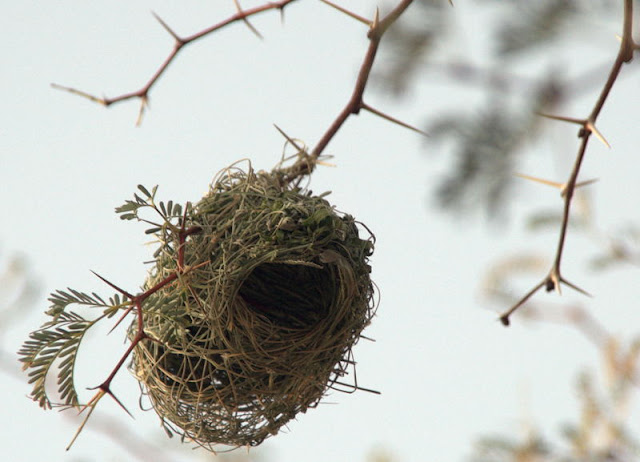 watching the other tourists and shuttles experiencing reactions to deep sand ranging from terror to hilarity, and luring in birds to drink out of an improvised bird bath.

This pied crow had flown overhead just as I set out the water. He saw it instantly, immediately banked hard and set down about 6 feet from the water, gave me a cautionary look or two before moving in for a long drink. It was only about 9:30 AM but far too hot for any person (or bird) outdoors without shade.

About an hour and another 10 degrees of increased heat later, the returning trekkers started appearing in the distance, their silvery umbrellas in sight long before they were. 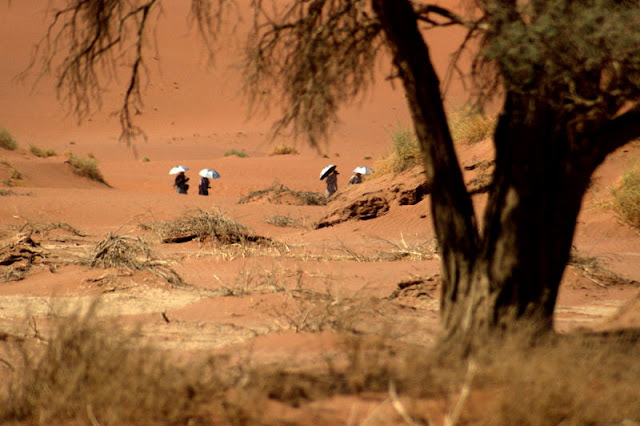 Their perseverance to get to Dead Vlei paid off with these beautiful photos. 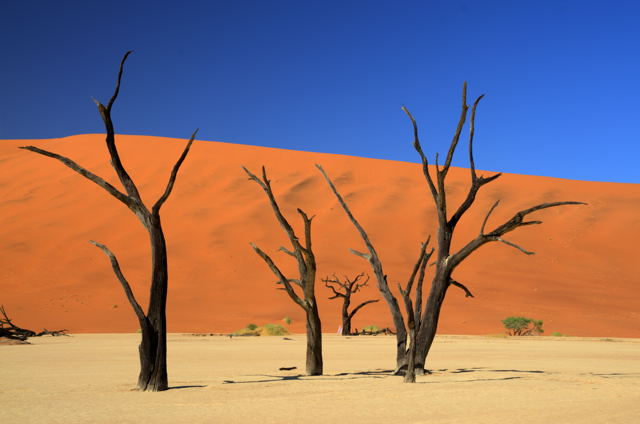 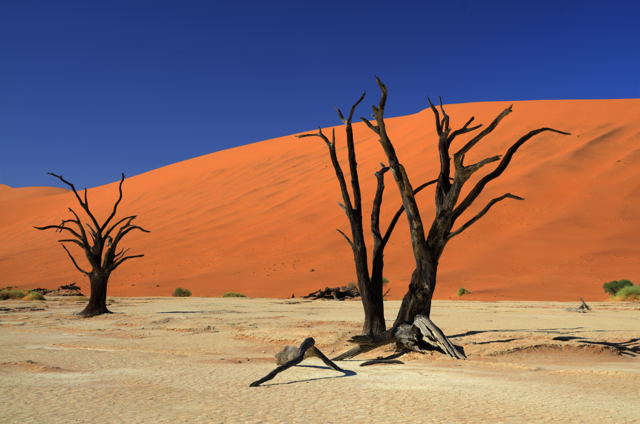 We left Sossulsvlei by about 11 AM as the heat and intense sun was making things most uncomfortable. On the drive back out though the loose sand, instead of a grimly set jaw, there was a grin on our son’s face. I know it’s a cliché but men, gasoline engines, and obstacles….it seems to be a highly desirable mix.

We headed back to our campground and took it easy during the heat of the day. The kids swam and the professor and I napped under the trees which made for a very pleasant New Year’s afternoon.

As twilight was approaching, the professor and our daughter hiked out to get photos of the sunset coloring the mountains 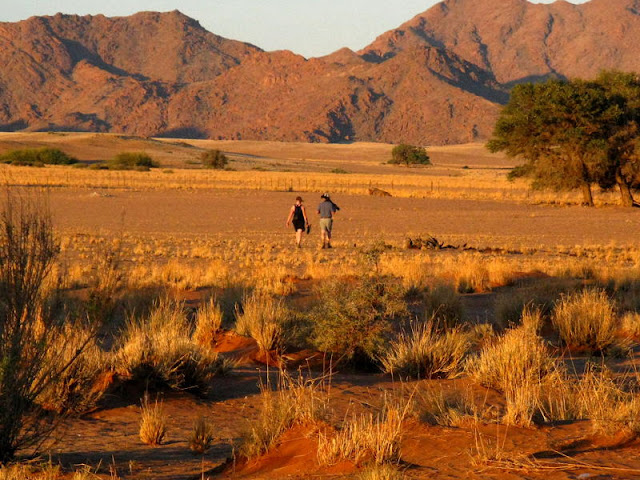 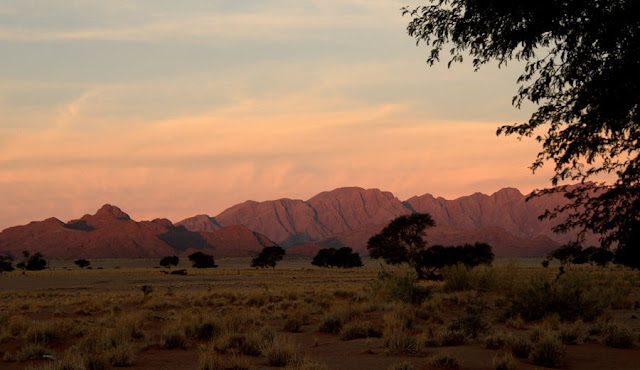 while these guys used the last of the day’s light trying to outwit the other at video games. 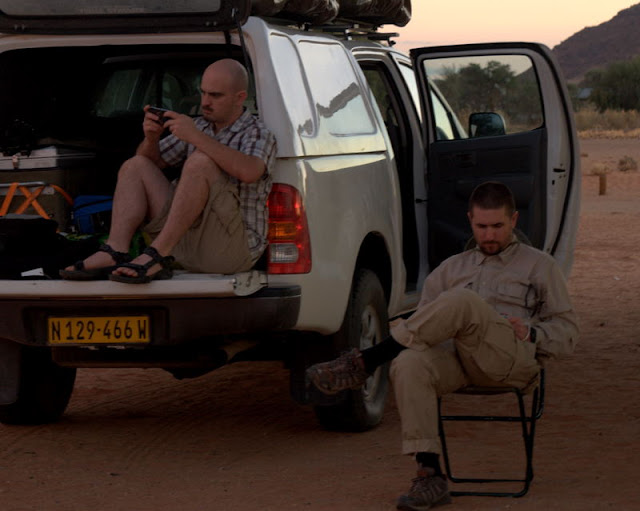