The Polytechnic of Namibia had their mid-semester Spring Break last week. It was the first break we’ve had since we arrived and our first real chance to travel out of Windhoek. In anticipation of traveling throughout Namibia, we bought a car to use while we are here and made plans for a four day escape to Etosha National Park in northern Namibia, about 529 km from Windhoek. 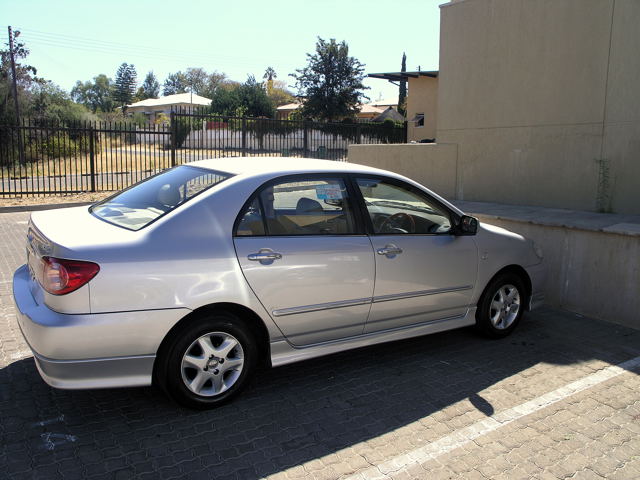 Our car is a Toyota Corolla Altis which is about the same size as a big Camry. Because we drive much smaller cars at home, this one is taking some getting used to, not to mention that having the steering wheel on the right requires an adjustment unto itself. The professor is getting the hang of driving on the left but the last ingrained habit we still need to modify is signaling to turn. Since all the controls are on the opposite sides of where you expect them, the turn signal is on the right, and the windshield wiper control is on the left. Therefore we are still notifying oncoming drivers of our intent to turn with not only the appropriate turn signal but also windshield wipers waving back and forth at them. We’re going to be hopeless when we get home!

Tuesday, we got off to our traditional crack of noon start. We were a little concerned because we didn’t know what the roads would be like. However, roads were great and the baboons, wart hogs, and occasional oryx running across the road didn’t impede us much. We were able to reach our lodge by sundown which is around 5:50 PM these days. Windhoek had developed a pronounced dust/smog? problem the week before our trip 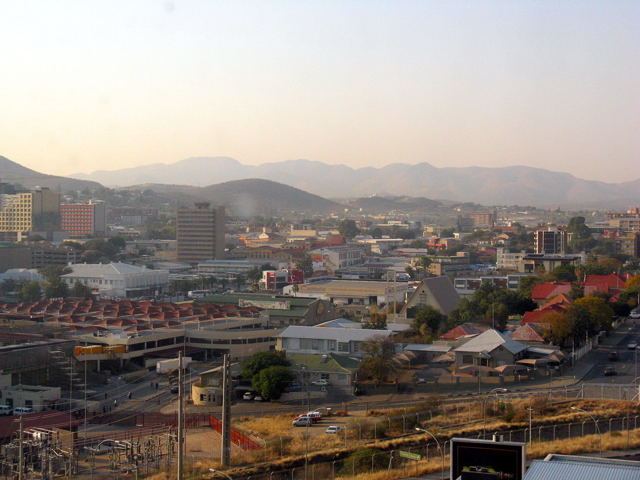 so we were really anxious to get out into the countryside and some fresh air.

Apparently you have to go farther than we did for fresh air. This is pretty much what it looked like all the way to Etosha. 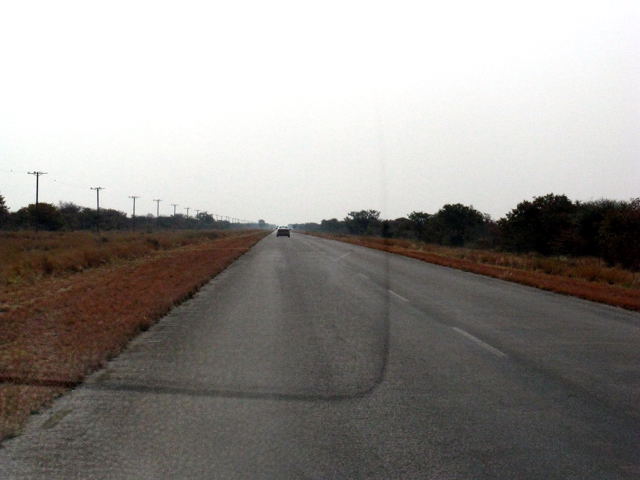 There is a pronounced haze in the sky and given that we were frequently in the middle of nowhere traveling from Windhoek to Etosha, we couldn’t figure out where it came from. We took a break in Otjiwarongo and had a quick bite at the deli inside the Spar. Spar is an upscale Dutch grocery chain with sites in Windhoek and other larger cities in Namibia. They had a great hot buffet, salad bar, and sandwich selections – anything you could want. We could have been in a Whole Foods. 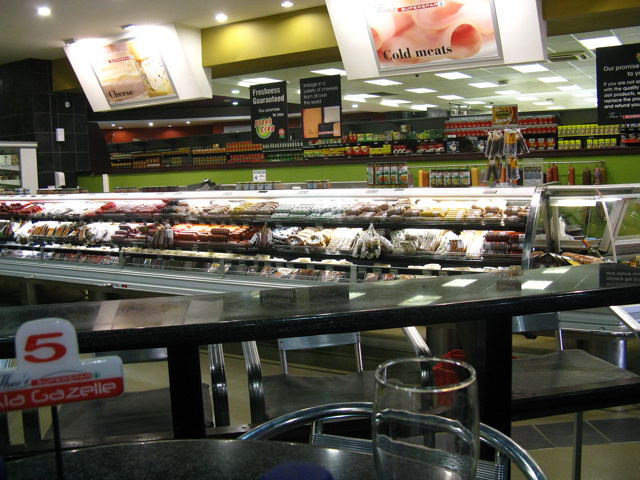 We opted for a quick lunch and a couple of bottles of Eish 2 O – ‘eish’ being the African sound of a H. 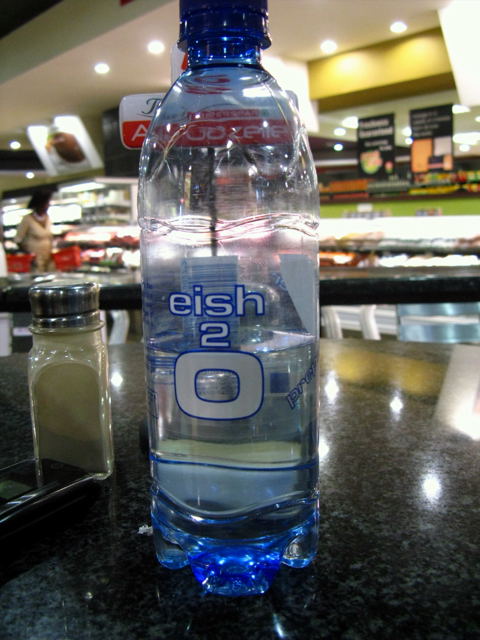 Then it was back on the road up through Outjo and onto Etosha Safari Camp, 9 km south of the Anderson Gate to Etosha.

Etosha Safari Camp is a one of the Gondwana Collection of Lodges in Namibia. The Gondwana Collection was the brainchild of a collaborative group of individuals, some Namibian, some European. They had seen the reactions of tourists to Grand Canyon and thought they could generate the same interest in Namibia’s Fish River Canyon which was also carved by a large river and which has rock layers back to some several million years old. The lodge they built at Fish River was so successful, they acquired additional lands and built lodges in other interesting Namibian locales.

The Gondwana Collection is a unique lodge operation in Namibia. If you are Namibian or have a work permit in Namibia (as we do!), you qualify for a Gondwana Card (essentially a frequent flier card) for which you pay a one time fee of $100 N (currently about $13.70 USD) and which entitles you for your lifetime, to a 50% discount at all their lodges plus a 25% discount on all dinners and activities. If you are a citizen of another SADC country, you can also get a lifetime Gondwana Card and a little smaller, but still significant, 40% discount. No one else does this in Namibia and lodges are very expensive here so this is one sweet deal.

We checked in at reception, helped ourselves to the always available coffee and tea, and sat by the pool contemplating how there could be such a beautiful set-up smack in the middle of Namibian bush. 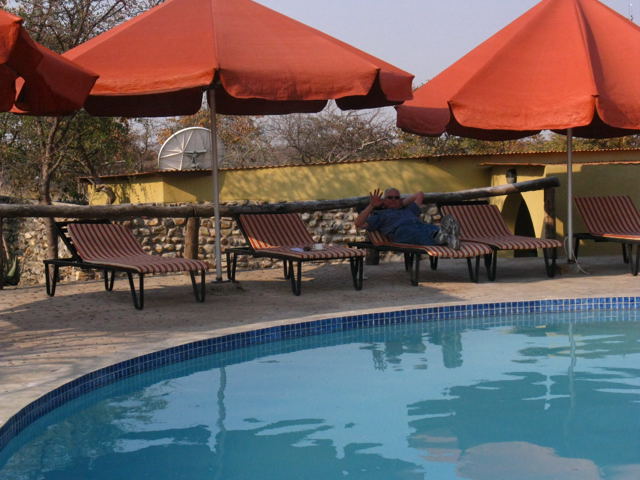 After 5 hours driving through dreary colored landscape, it was truly like discovering a desert oasis.


The beautifully carved key fob for our room was only the beginning of surprises. 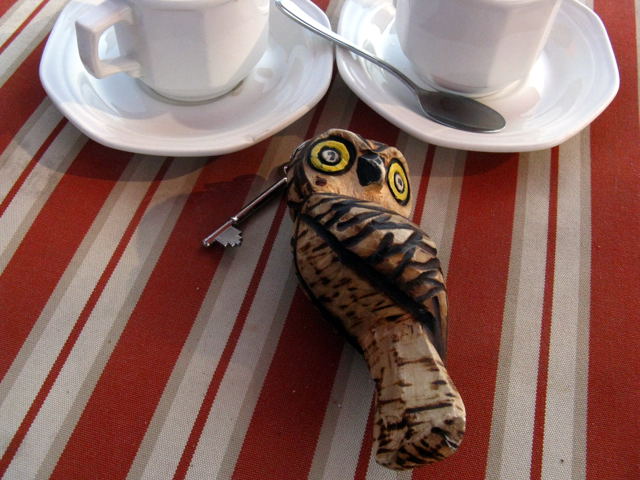 Guests are housed in free-standing cabins (called chalets here). When we opened the door, here’s what we saw. 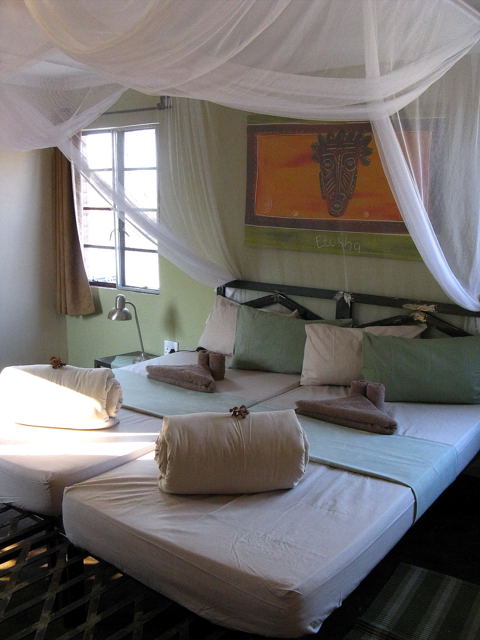 What a beautifully restful room, complete with an intricately beaded hartebeest head. 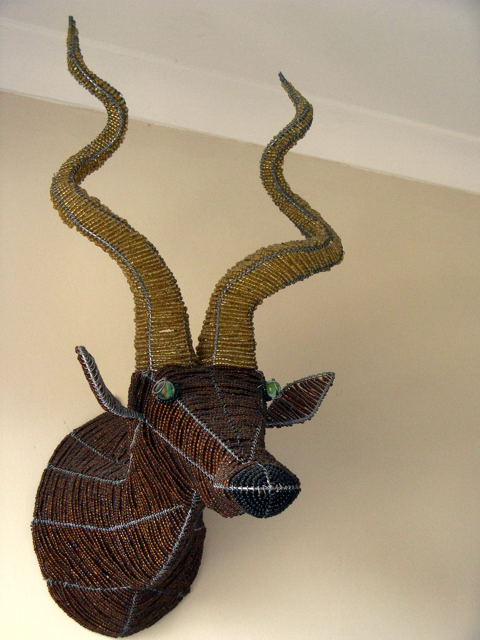 Then we turned to look at the bathroom and saw our shower. 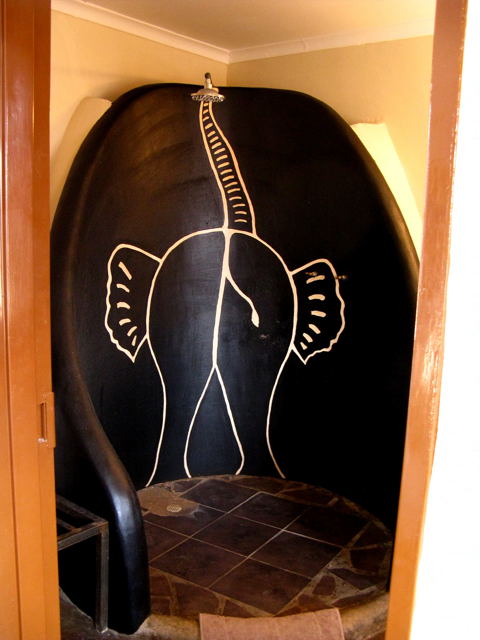 We wanted to take it home with us right then! What a great way to relax after a dusty day in Etosha, or any day for that matter. I could definitely make that thing work in my house.

It was almost time for dinner, so we unpacked our gear and headed to the dining area on the patio. Since this is dry season and there is NO – yes, that’s correct, 100% NO chance of rain; all the tables were arranged outside. An outdoor evening of great food, candlelight, 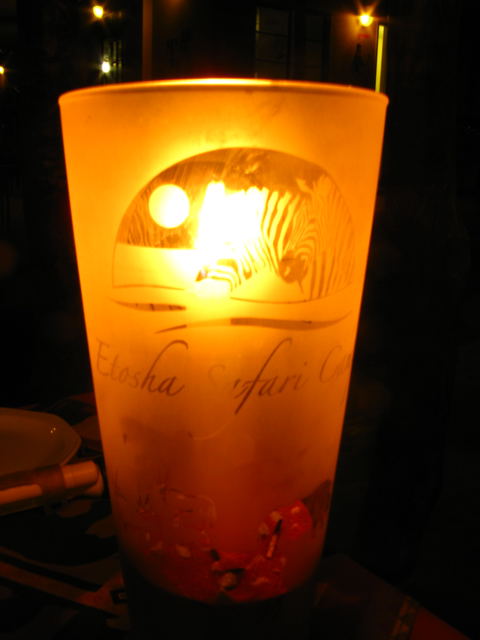 made for sweet dreams of Etosha the next day.
1 comment: