Day six was an idle day of sightseeing and hanging out in Swakopmund and Walvis Bay. It was overcast, much like the majority of mornings in Swakopmund (Swakop to the locals). Cool, humid air moves in from the Atlantic over Swakopmund and Walvis Bay overnight but instead of forming clouds and pushing inland, the moist air meets dry warm air masses from the adjacent desert and cannot rise to form clouds. Instead, it forms fog over the coastal area that can extend inland up to 30 miles. The fog takes a good while to burn off each day and sometimes, doesn’t burn off at all. Those cool moist breezes coming off the ocean and dreary skies overhead made a perfect reason to warm up over a cappuccino at an open-air cafe with a view to the sea. While we waited for our son-in-law to finish some research at a nearby internet café, we passed the time watching the ocean and the seabirds nearby. 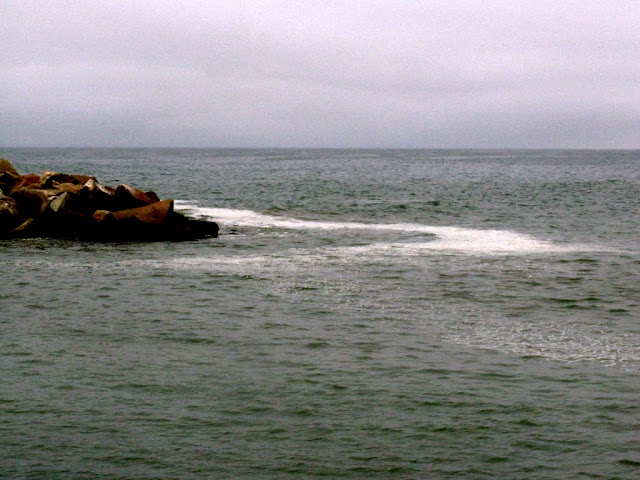 The day’s plan was to do some birding around the lagoons of Walvis Bay and then to the big dunes of the Namib just across the highway from the ocean. After a lunch of fresh fish caught just off shore along with the requisite Rock Shandy, 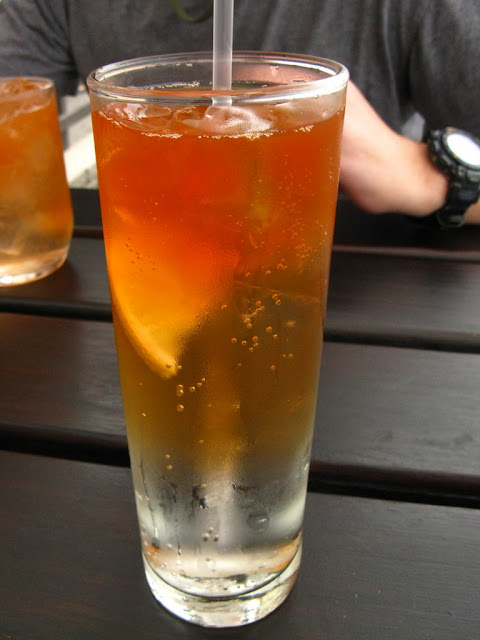 we spent some pleasant hours up and down the lagoons of Walvis Bay helping add to our daughter’s life list of birds. Most of the birds were better viewed through binoculars than the lens of my camera, so I have only a few photos to show for it. The flamingos were in lagoons closer to the road so we snapped a few pics of them foraging for food. 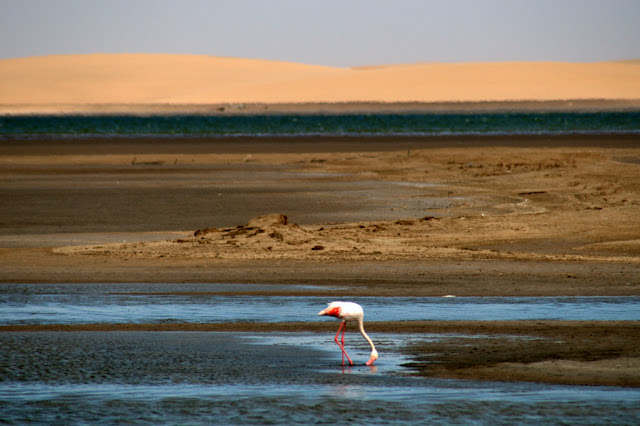 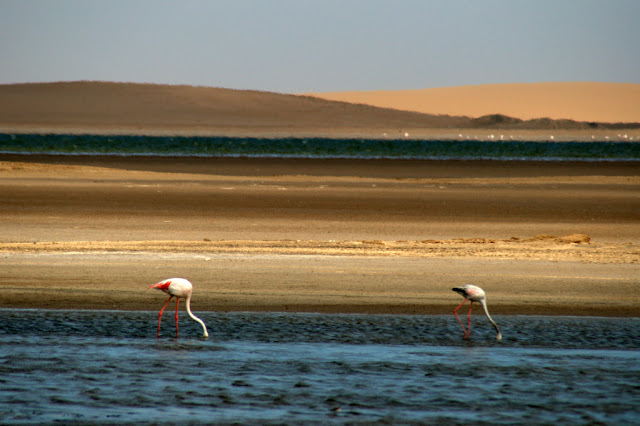 It’s mind boggling to me to see these tropical birds rooting around in the shallow lagoon when some of most arid desert on earth is just across the highway.


Our birding excursion took us down a road that led to the salt factory in Walvis with shallow salt beds on either sides. Some were pink, others white. 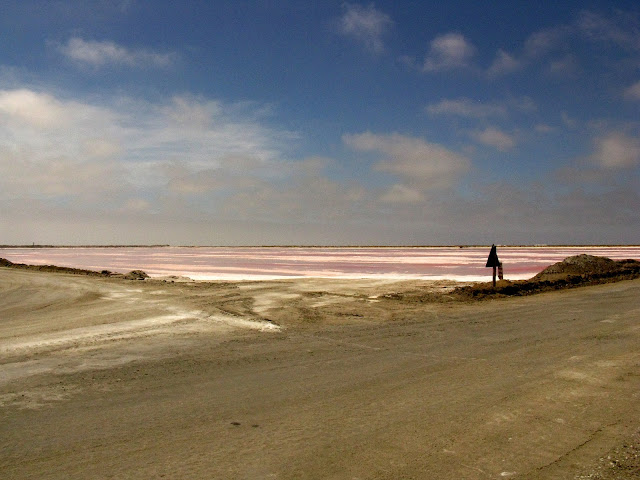 We weren’t sure how the pink beds came to be pink when ones just across the road were white but it was fun to see such huge expanses of sea salt. This is the sort of stuff that costs you a small fortune at Whole Foods.

Toward the end of the afternoon, we headed out to Dune 7 just outside Walvis Bay. Dune 7 is the largest of the nearby dunes. You can hike all over it which is what the rest of the family did. I opted out of the hike and took photos from below. 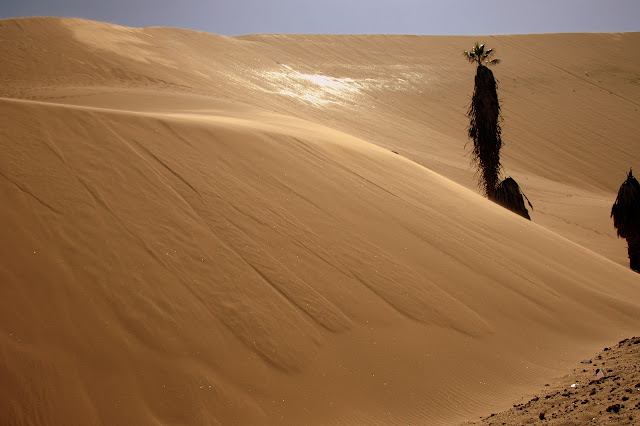 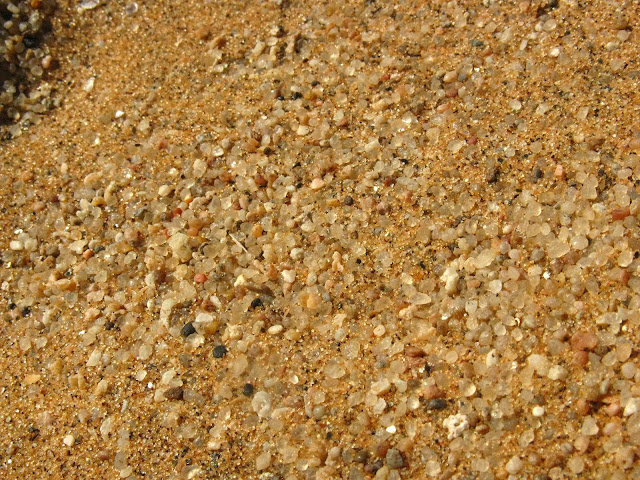 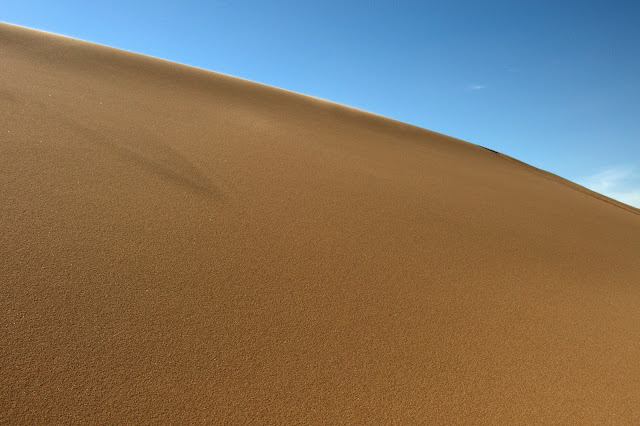 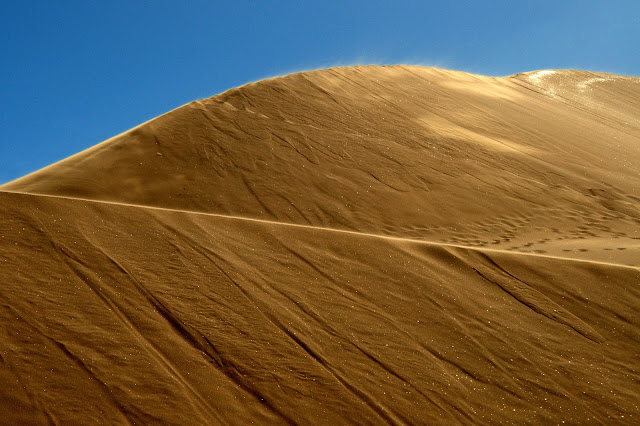 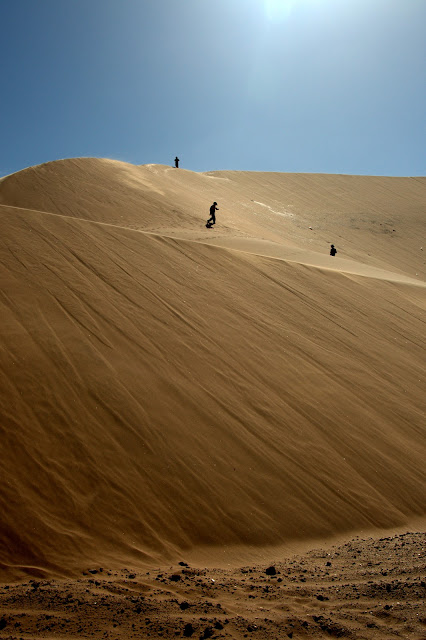 The white specks on the close ups and what appears to be sheen on the side of the dune are in fact, accumulations of sparkly mica. You can watch how the dunes shape shift just by sitting and observing.

As we headed back to Walvis and on to Swakopmund, fog was beginning to roll in from the ocean. 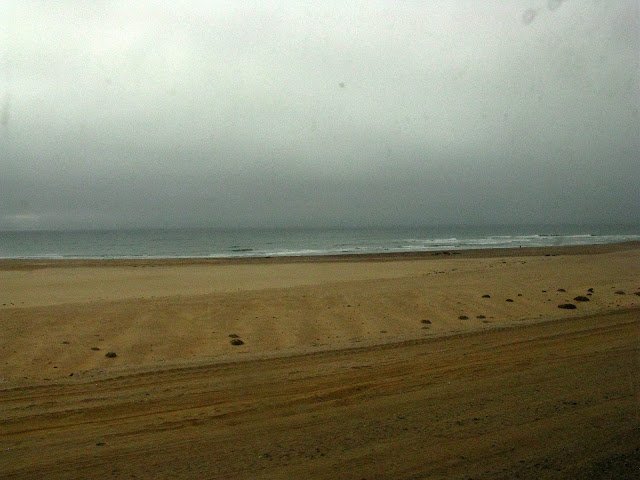 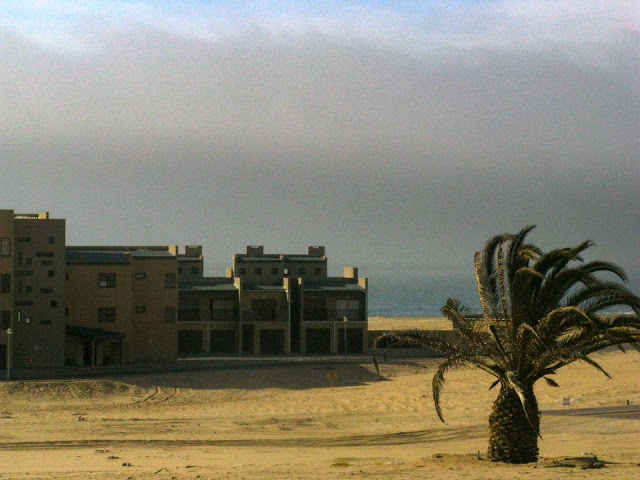 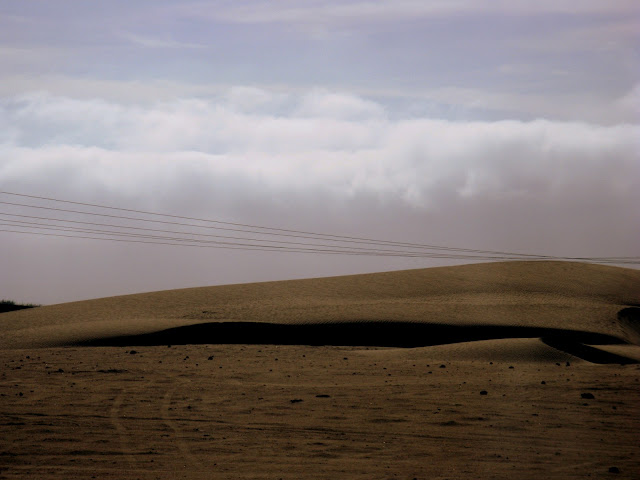 Since this was only January 3rd, Swakopmund had its holiday decorations still in place. It was fitting that on the edge of the ocean they would be marine motifs! 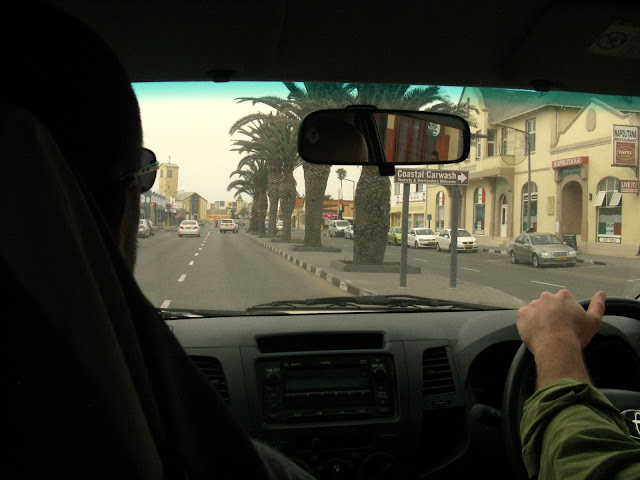 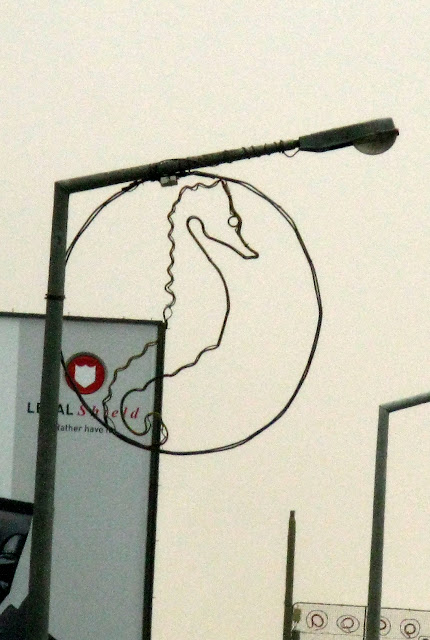 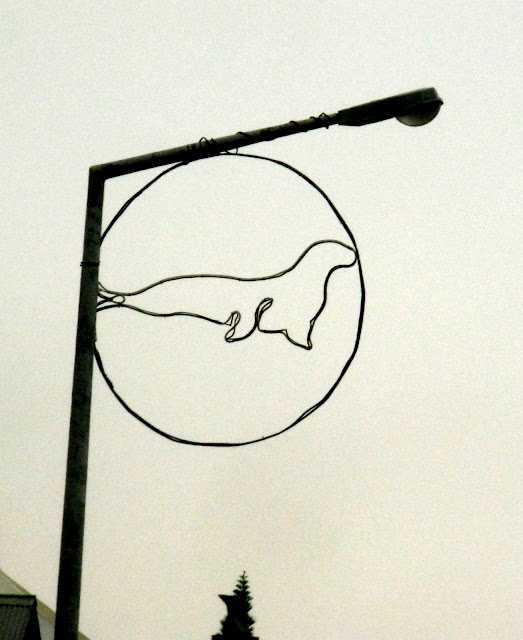 Back at the campground, we feasted on some of the most excellent sausages we’ve ever eaten (hand made by the wonderful owners of Sophia Dale Rest Camp). 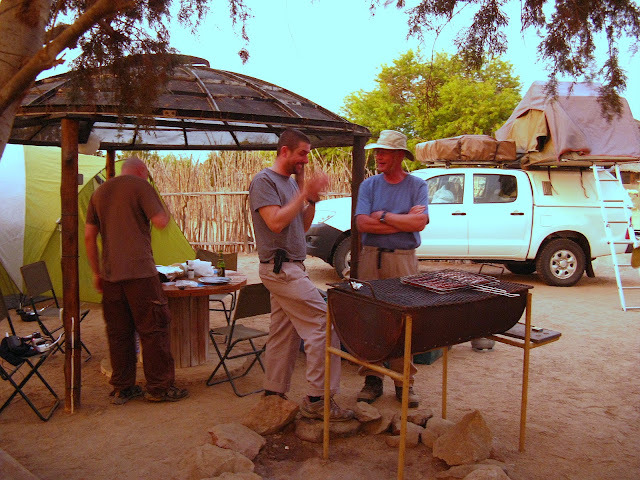 and enjoyed another gorgeous sunset to close our two days at the Atlantic. 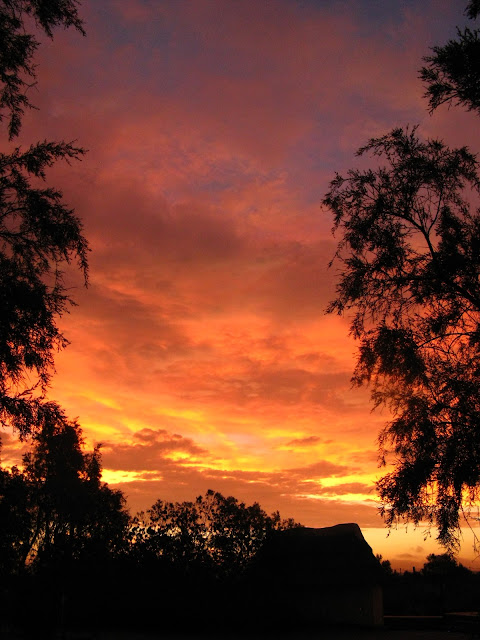 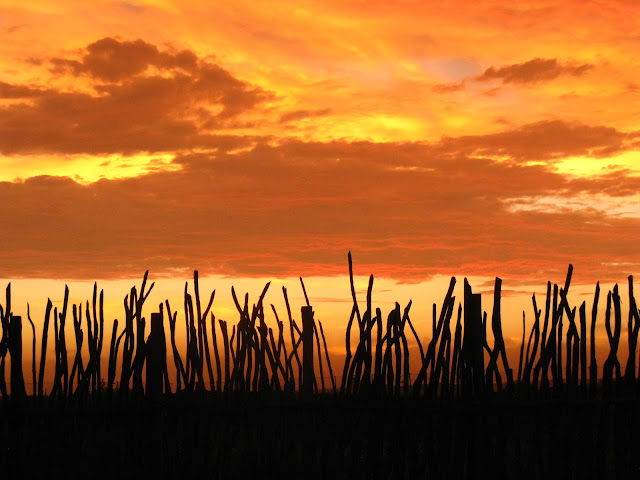 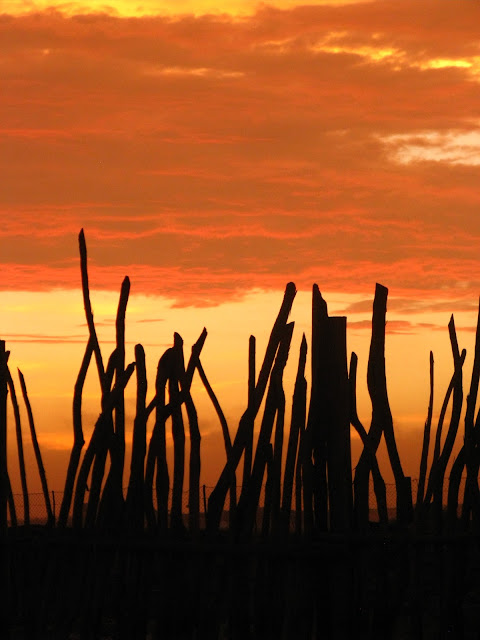 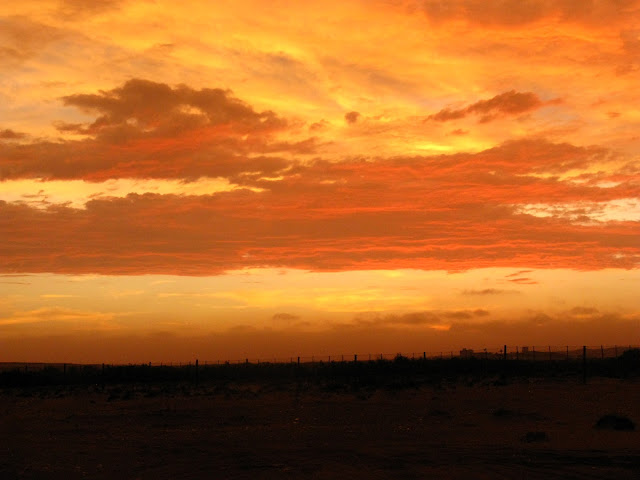 The next morning we were leaving for Damaraland and Twyfelfontein.

We had no idea we would have to completely reconsider our previous definition of desolate in the process.
No comments: