December 29th dawned hot and sunny, the kids’ jet lag had abated, all the duffle bags, groceries, the ground tent and cots the kids brought had been packed into the 4x4 Toyota Hilux. Everything was stuffed in among the two spare tires, cooking kit, propane burner/stove, cooler, table, five chairs, giant 10-liter water bottle, and fridge.

Electronic gear and cameras rode in the cabin with us to protect them from excessive vibrations and the ubiquitous sand that seeps into the bed of the truck despite systems to block it. We left Windhoek about 11 AM for our much anticipated camping trip and the first night’s destination – Keetmanshoop and the Quiver Tree Forest. We drove out of the mountains surrounding Windhoek and headed due south. 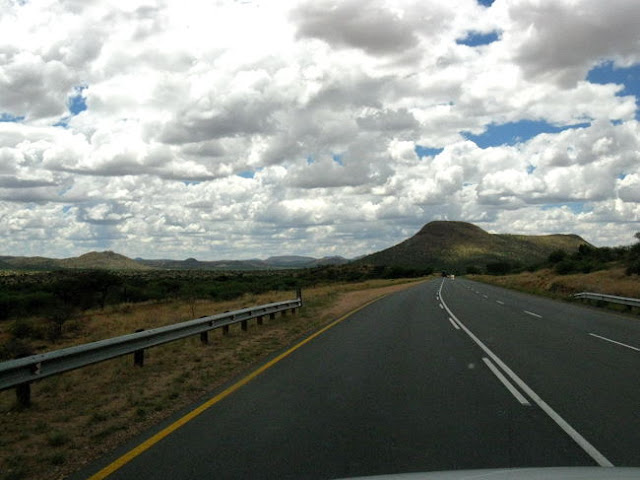 Approximately 84 kilometers later, we made a first stop for photos at the Tropic of Capricorn because you cannot be assured you’ll ever get to take this photo again! 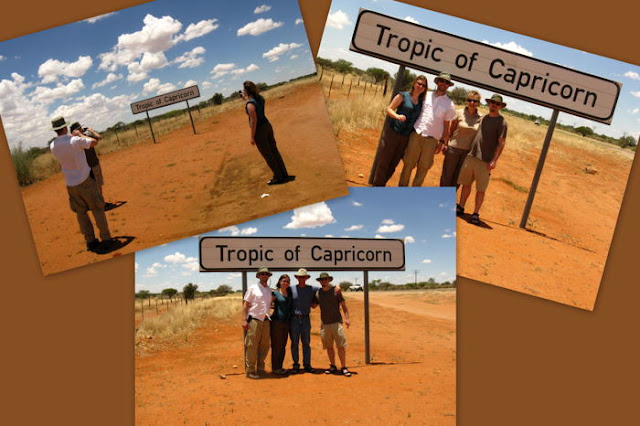 Back in the car and straight south to Keetmanshoop. Once you get past Mariental, the roadside landscape is a bit tedious….mostly empty flat plains and a roadway that’s a consummate illustration of vanishing point. 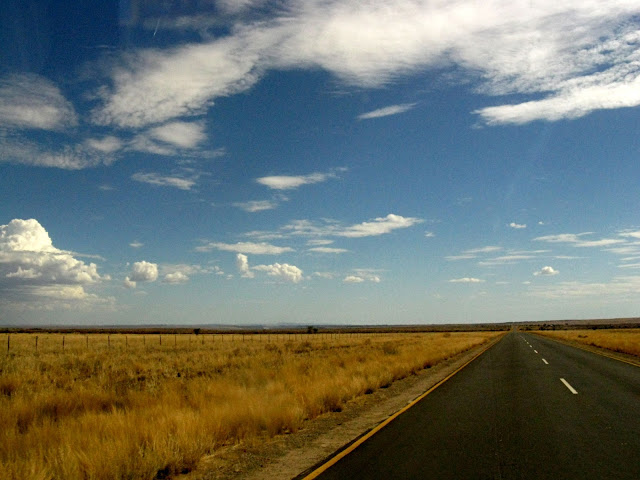 Any tedium induced by unchanging scenery was ameliorated by clouds that were gorgeous as ever. 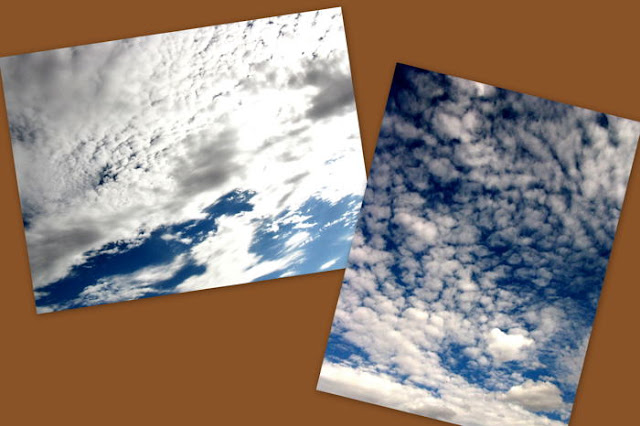 Despite our changing seats and drivers every hour, 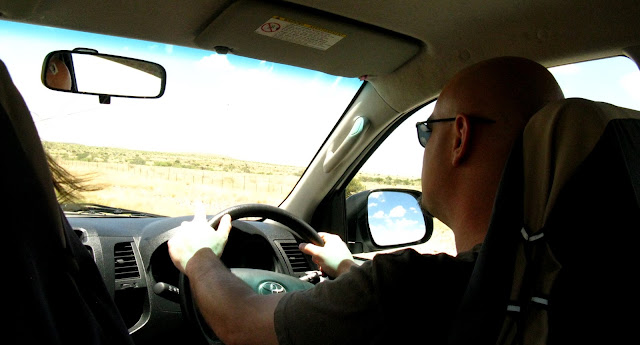 by the time we saw the sign for Quiver Tree Forest we were ready to be out of the car for the day. 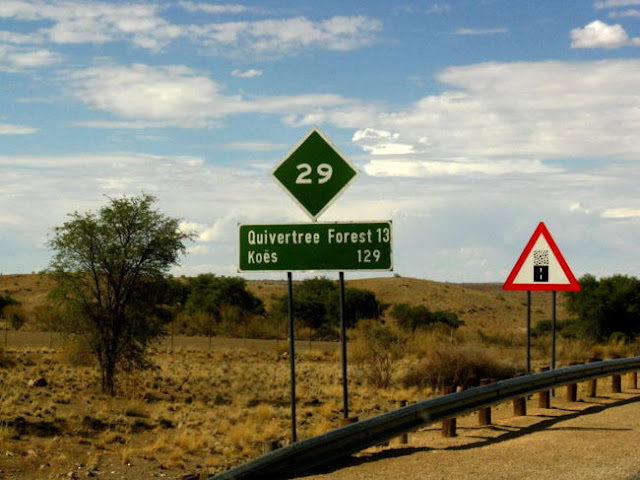 A quick 13 kilometers further on a gravel road and we were there. 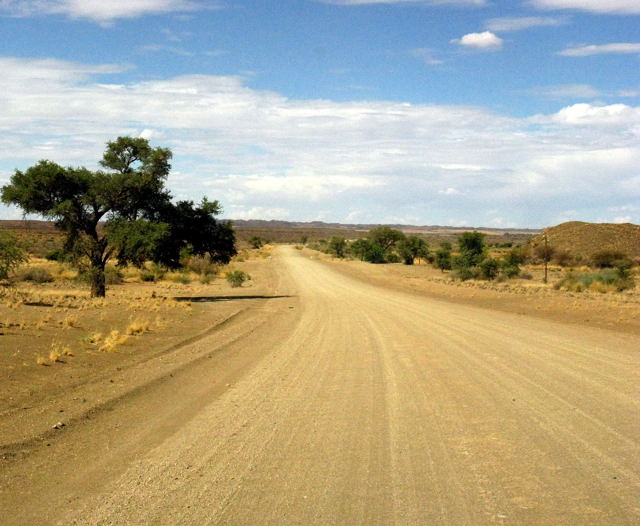 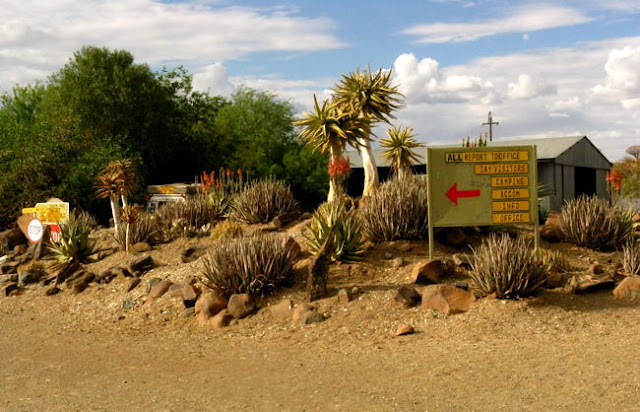 It was a really hot afternoon so still feeling our way with this camping thing, we opted to stay in one of the air conditioned chalets rather than to camp this first night.

Even though it was declared a national monument in 1955, the Quiver Tree Forest is situated on a private farm. The owners offer camping and cottage accommodations and charge admission to see the forest. They also have several rescued cheetahs on the farm which have become reasonably tame. The cheetahs are fed every afternoon at 5PM. After receiving instructions from the staff you can pet the cats if you like. The professor, who has a soft spot for all animals– most especially cats– was not about to miss the opportunity. 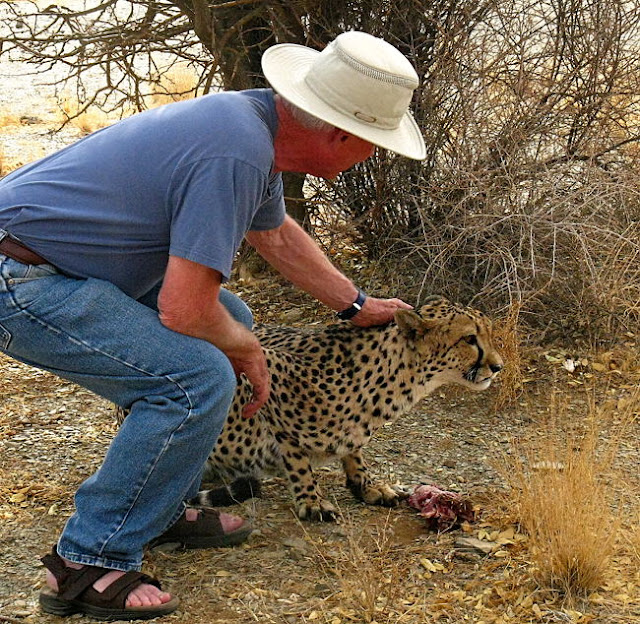 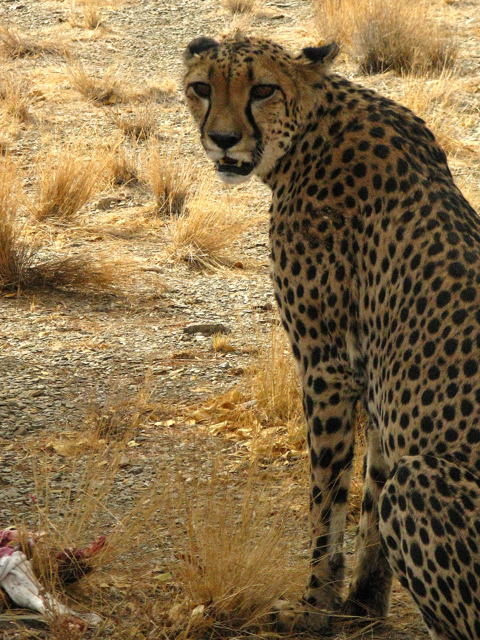 After the cheetahs, we took off for the forest. Not actually composed of true trees, the forest is an amazing display of succulent Aloe dichotoma plants, some of them hundreds of years old. 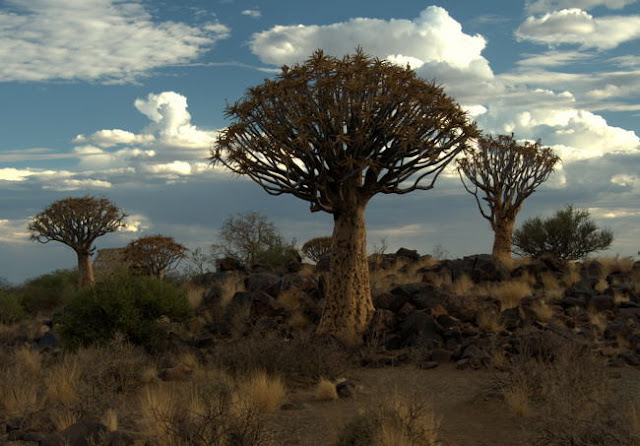 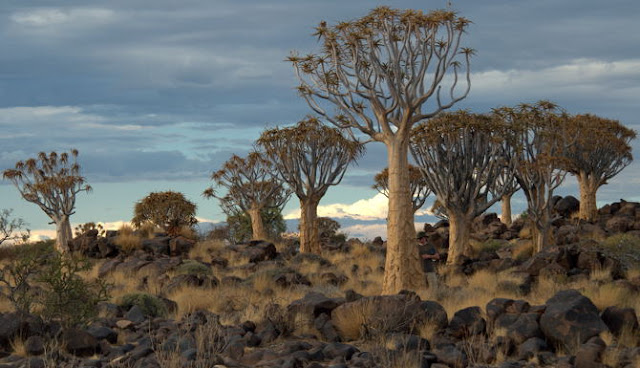 Apparently, the more common name derives from the fact that some Bushmen and Hottentot tribes used the pliable bark 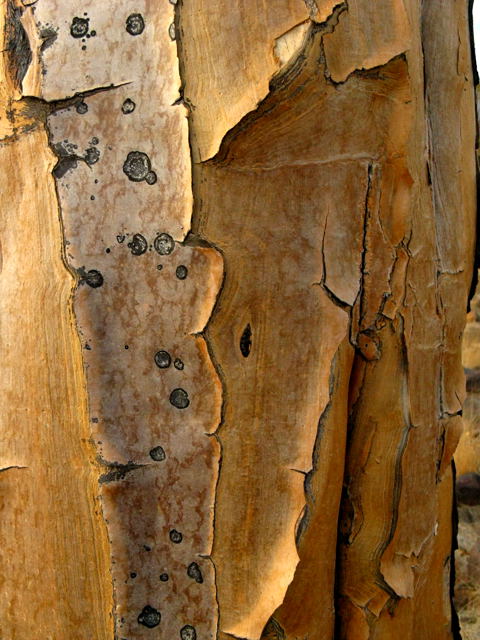 and branches to make quivers for their arrows. These are heat-loving plants. You can find their trunks happily growing over dark rocks that absorb much of the day’s intense heat. 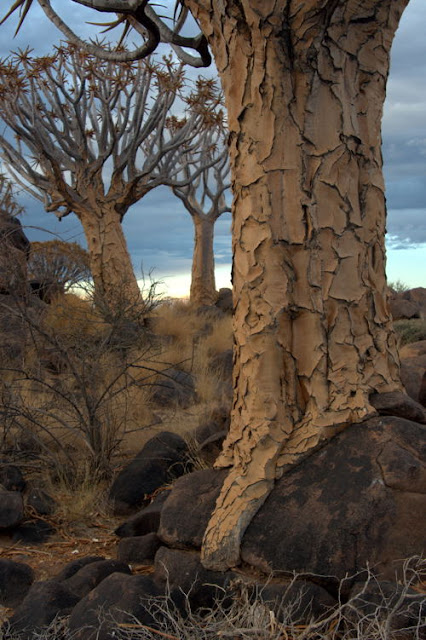 We spent a good bit of time roaming around looking at the trees and setting up photographic perspectives. 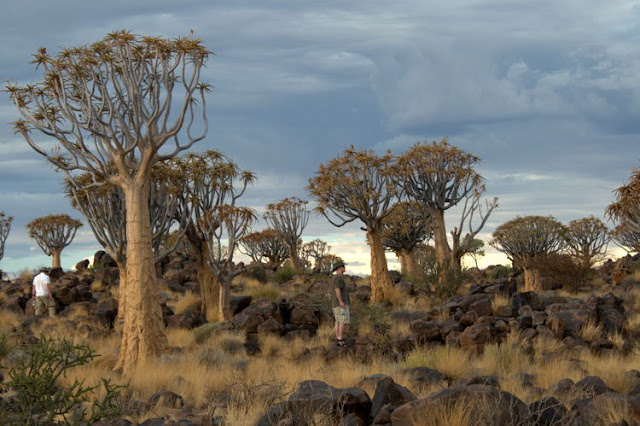 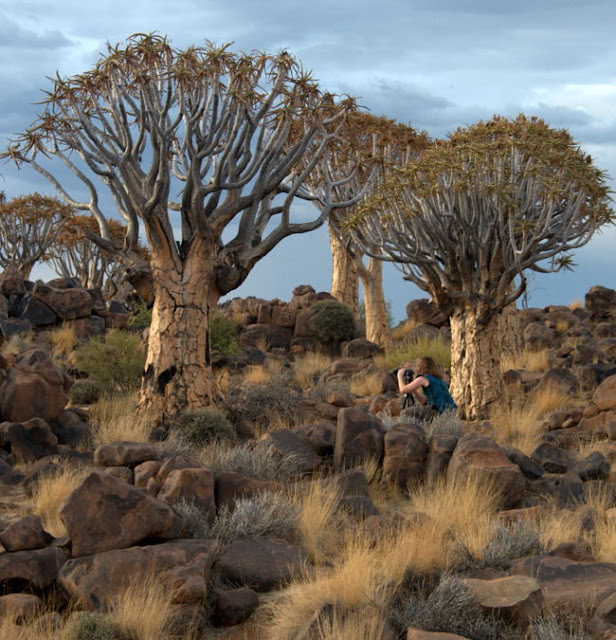 As sunset came on, we and the rock dassies spent some time just taking in the deepening colors. 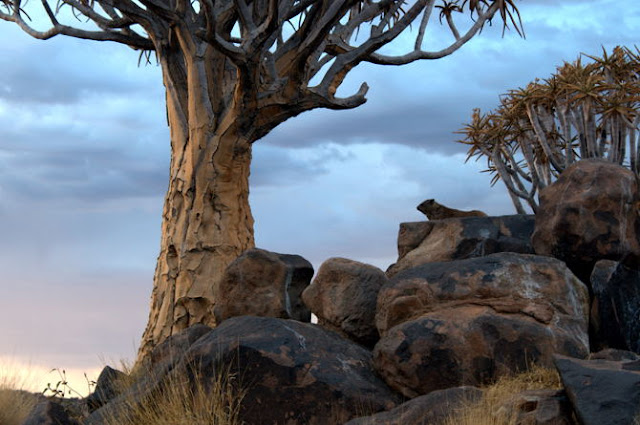 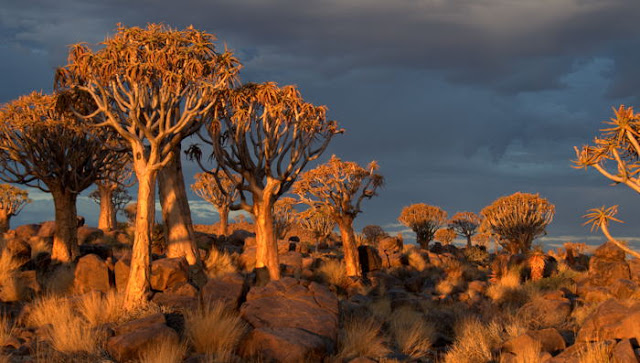 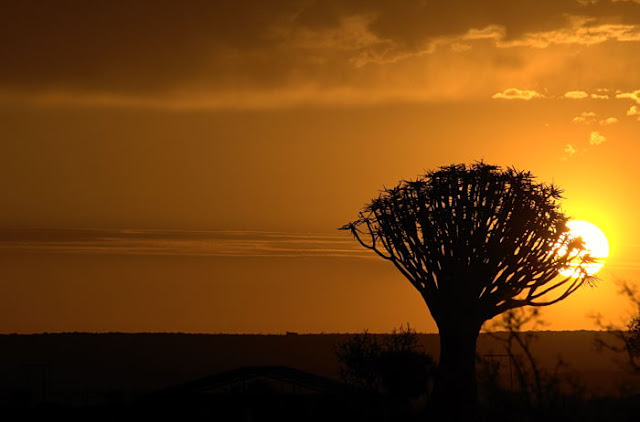 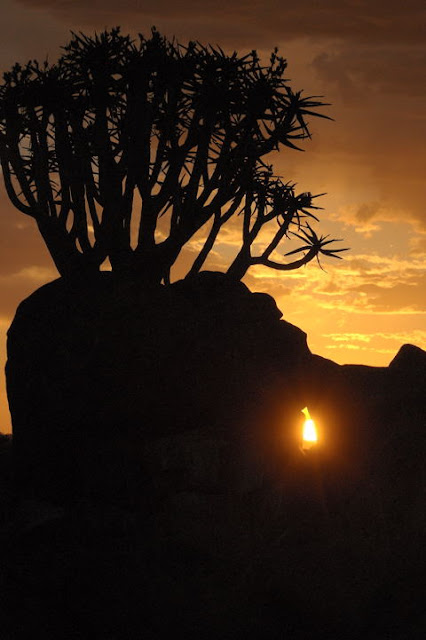 The next morning we drove out of the camp 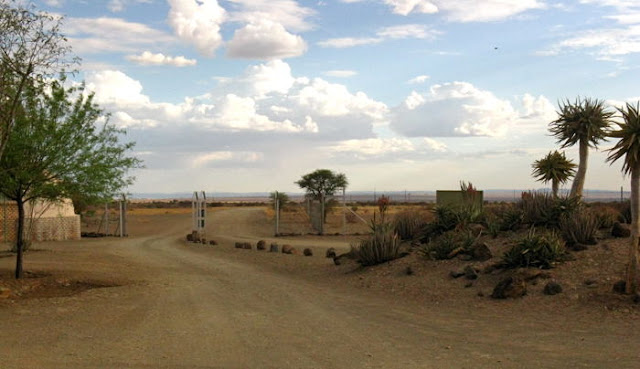 headed for Luderitz, Kolmanskop, and back to Aus for the night. And even though
our trusty hired truck was a nicely fitted out 4x4 Toyota Hilux with everything you need for camping, 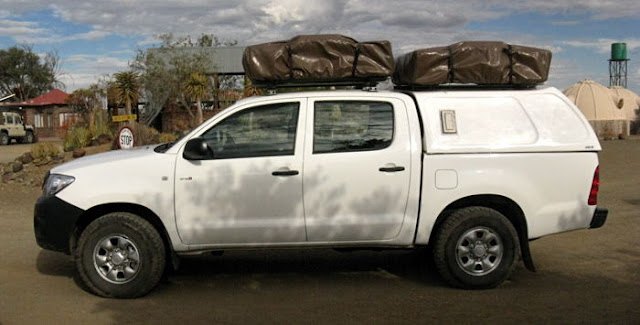 our son found something much more beautiful to behold in this Land Rover Defender. 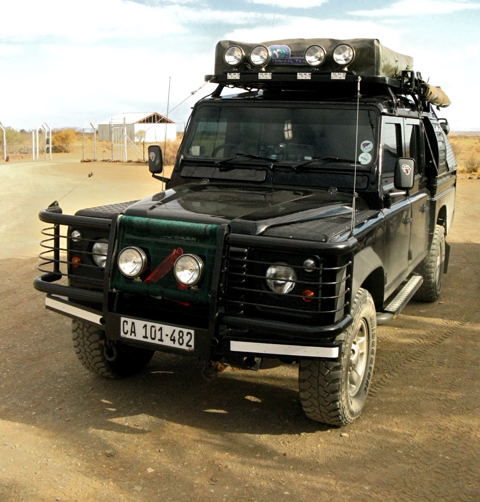 Pity they don’t sell them in the US.

This is one exceedingly tempting off-road vehicle!