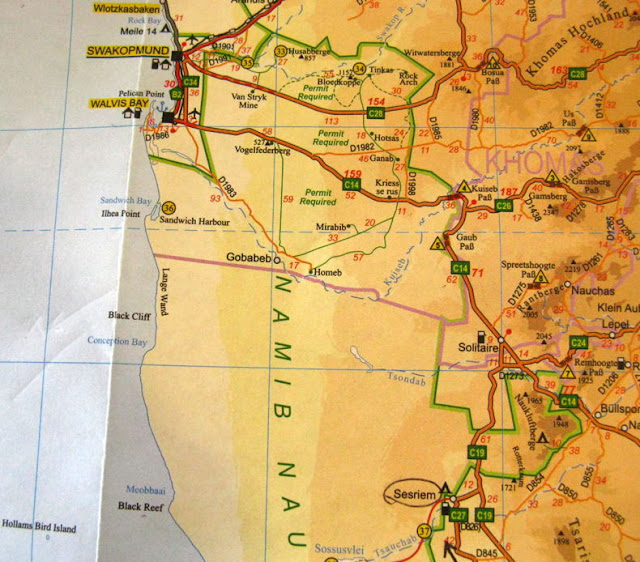 It was hot again the morning of January 2nd and we had another long day of driving ahead of us. Just after this photo, 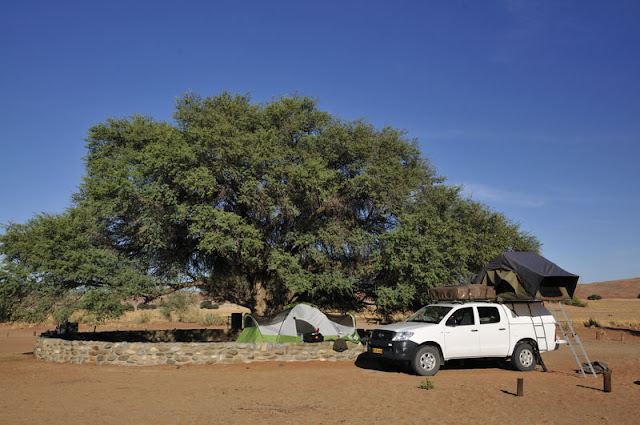 we packed up our camp and headed out. Before leaving Sesriem, we stocked up on cold water and snacks at a small convenience store/gas station with an internet café just across its parking lot! 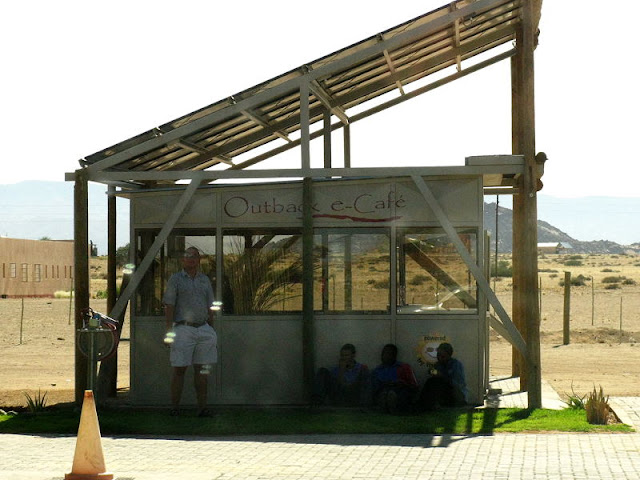 Back onto gravel roads, we were reminded again it doesn’t pay to follow the vehicle in front of you too closely. 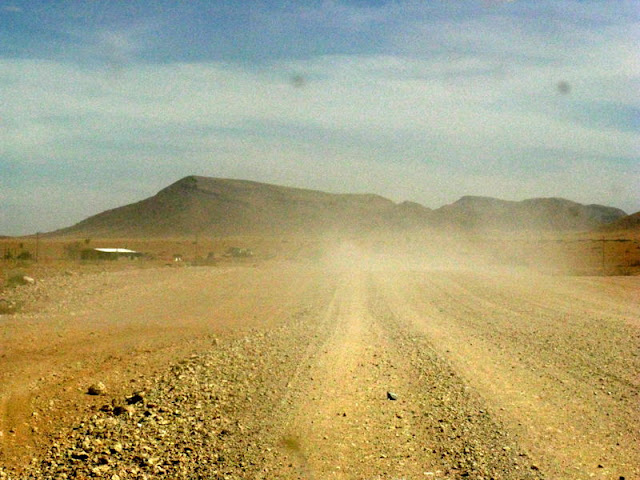 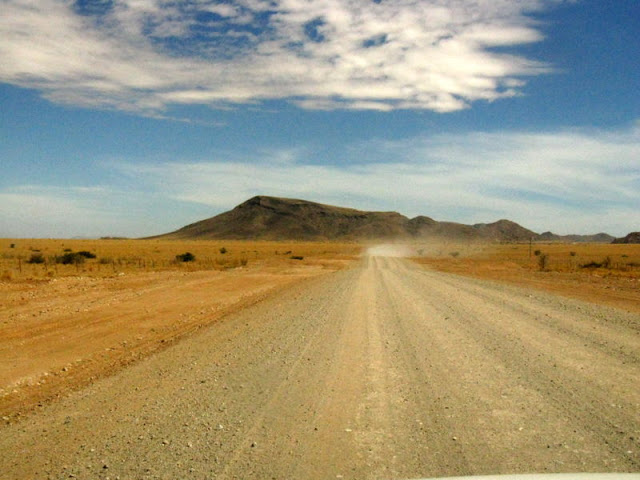 Better to hang back a little or it’s guaranteed you will eat dust all day long. 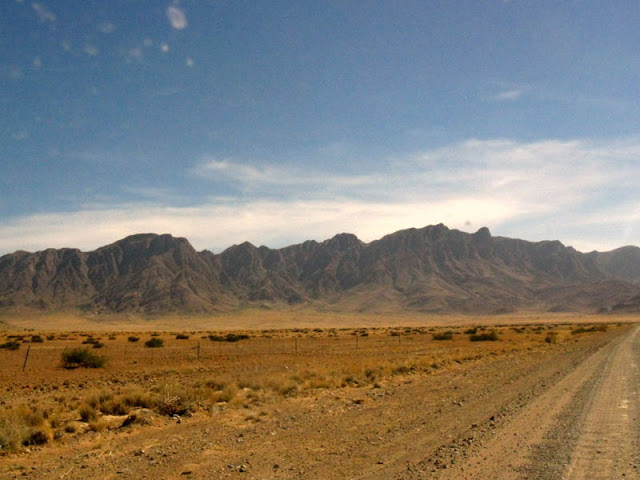 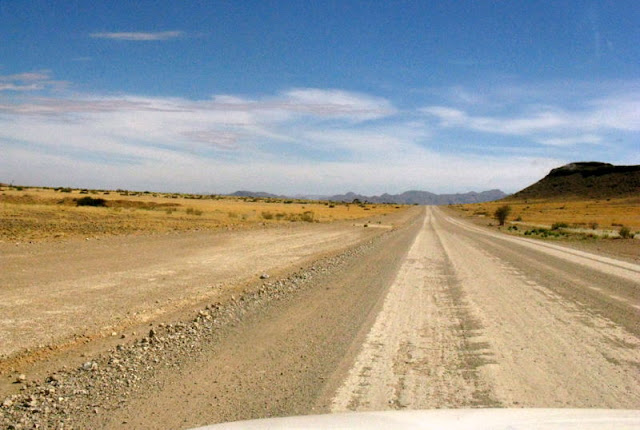 By 11 AM, it was time for more cold drinks and a driver switch, so we made a quick stop at Solitaire for supplies. 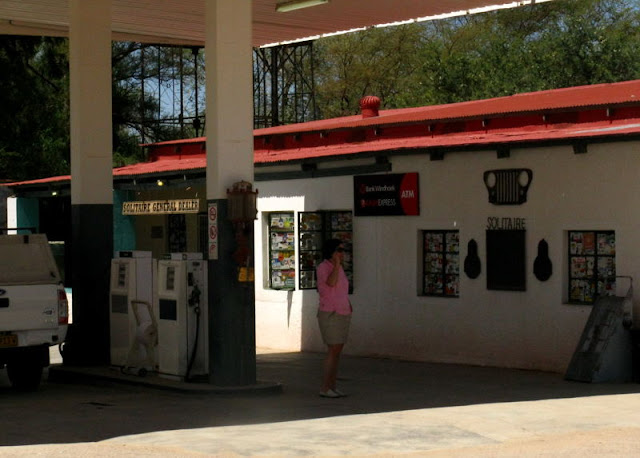 Solitaire is little more than a smudge on the map but has a small lodge, small gas station, small bakery, small convenience store, and small restaurant all on a compact spot of land just off the road.

When I went into the store, I was surprised to see these ancient typewriters as part of the proprietor’s collection. 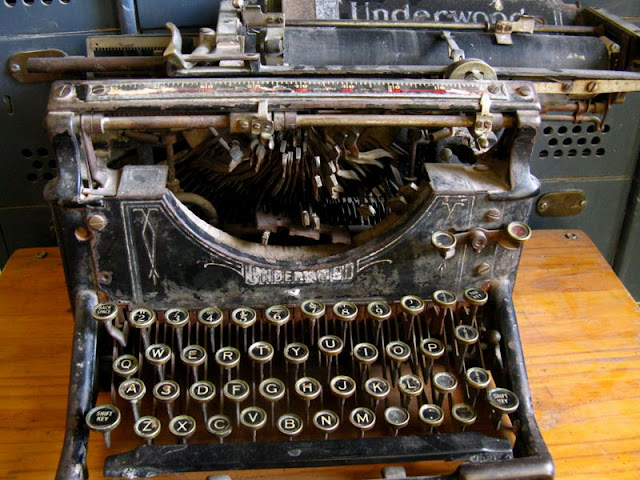 This old Underwood looks just like the one my sister bought sometime in her grade school years when she suddenly decided to learn to type. She could always do that—simply decide she wanted to accomplish a goal, gather the tools and knowledge to do it, and promptly accomplish it. She couldn’t afford anything much better than this old Underwood (our folks didn’t want us to ruin their good typewriter) and she bought a 33⅓ rpm record that was the audible Mavis Beacon Teaches Typing of its day. It took a lot of months of my listening to her record drone “A…S…D..F… Now, J…K..L…” before she learned to type. But once she did, she typed like the wind. Not having that kind of patience, I would try my hand at it, but become immediately frustrated when the old typewriter did this in response to my efforts. 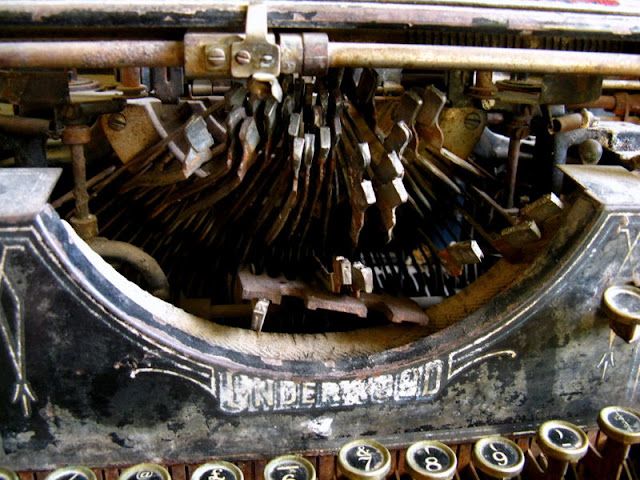 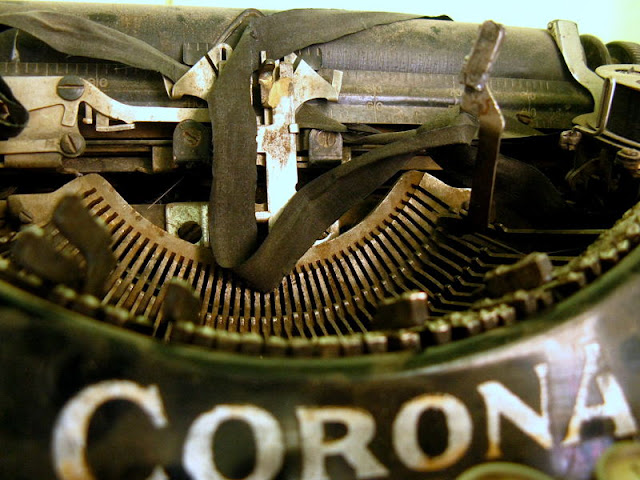 Unlike my sister, who had a far larger frustration tolerance, I learned to type  much, much later.

The mountains played out as we continued on C14 but just before the point the road crossed the Kuiseb River, suddenly there were hills outside the truck windows and dips in the roadway leading to the river floor. 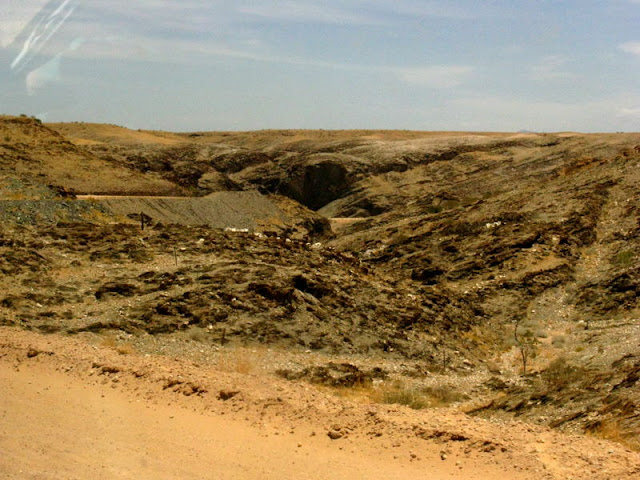 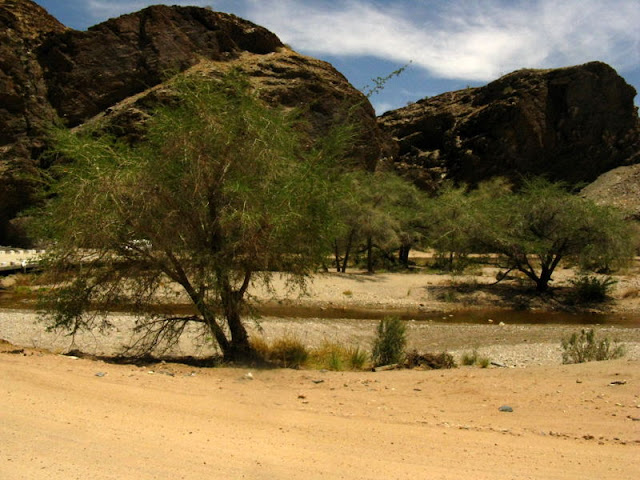 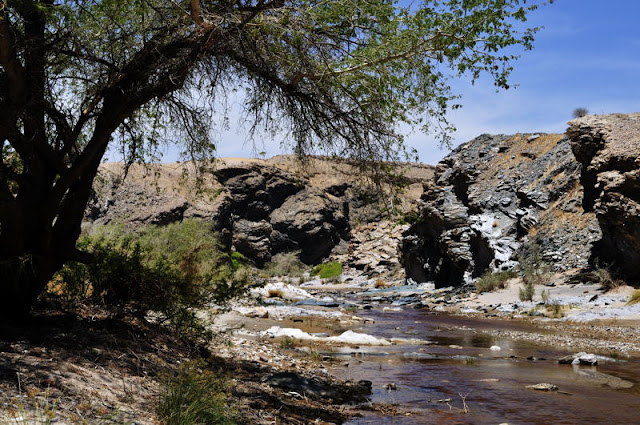 It was fascinating to see this ravine crop up out of what seemed to be nothing but flat land as far as the eye could see. We stopped to walk around a bit and marveled at the variety of rocks (and huge chunks of quartz!) on the sand at the river’s edge. 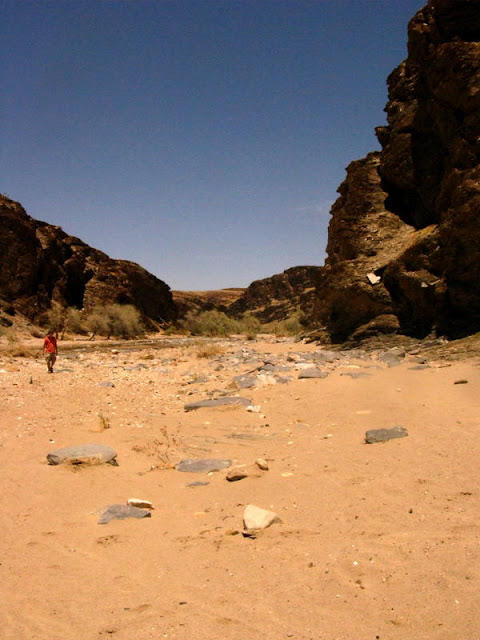 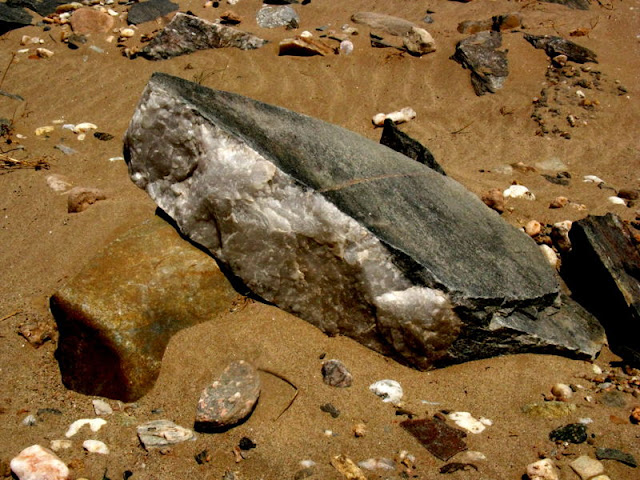 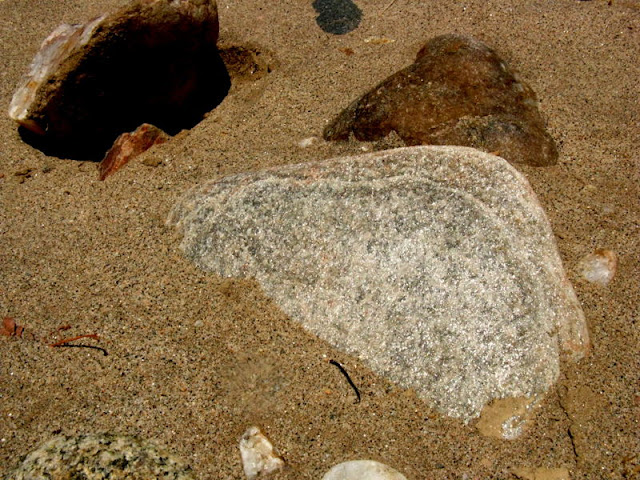 Weavers’ nests dangled from the trees like Christmas ornaments. 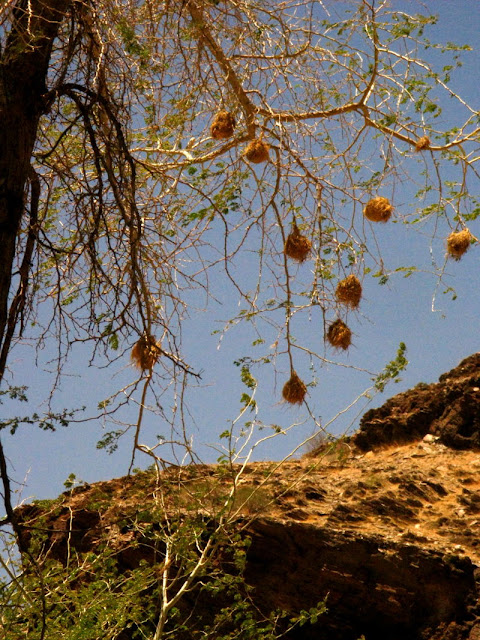 Out of the Kuiseb River ravine, the road looked like it did before the river but the closer we got to Walvis Bay, the more desolate and moonscape-like it became. 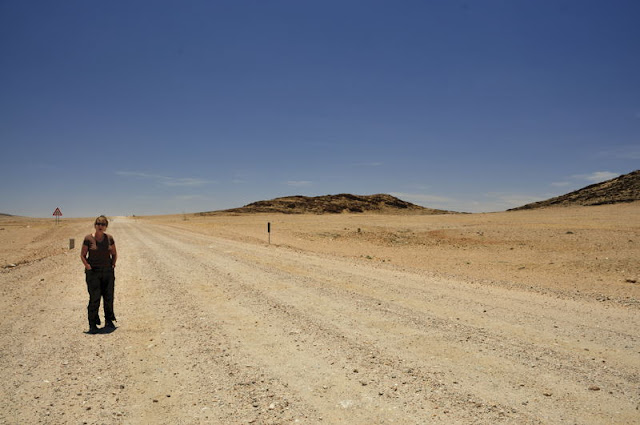 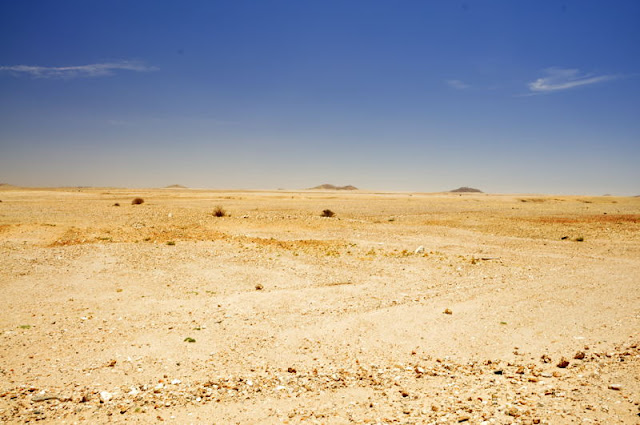 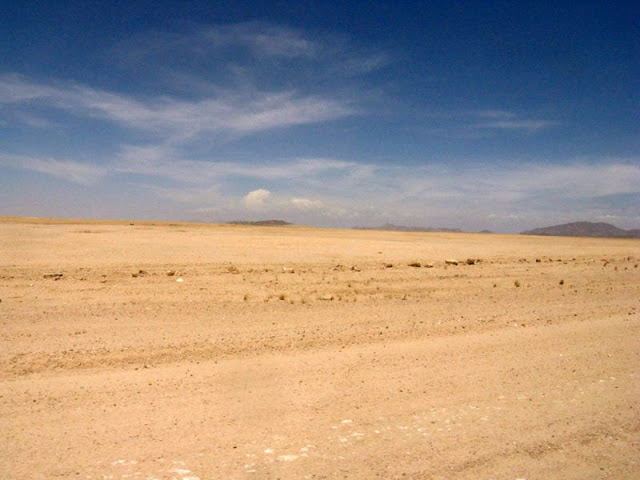 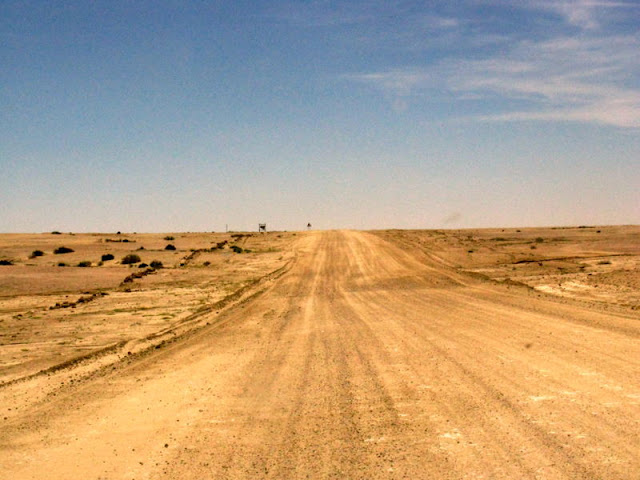 The last thing you would ever expect at the end of such a protracted stretch of emptiness is this: 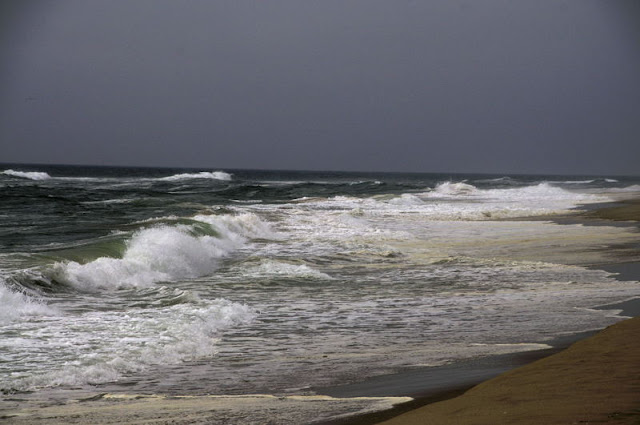 But there it was again, that amazing juxtaposition of empty desert ending right at the sea. Brilliant sunlight danced on the waves making it ideal for a carefree romp through shallow waters. 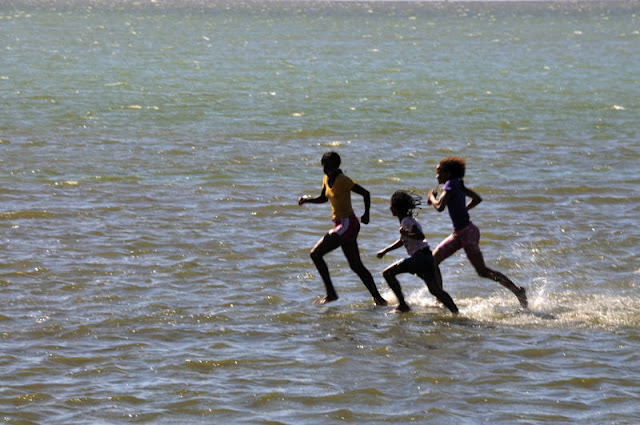 We pushed on to Swakopmund for groceries and then to our campground outside of Swakopmund for the night. The campsite was large and accommodating but best of all, had a nearby open field where at day’s end, you could watch the sun setting into the ocean a few kilometers beyond the ridge. 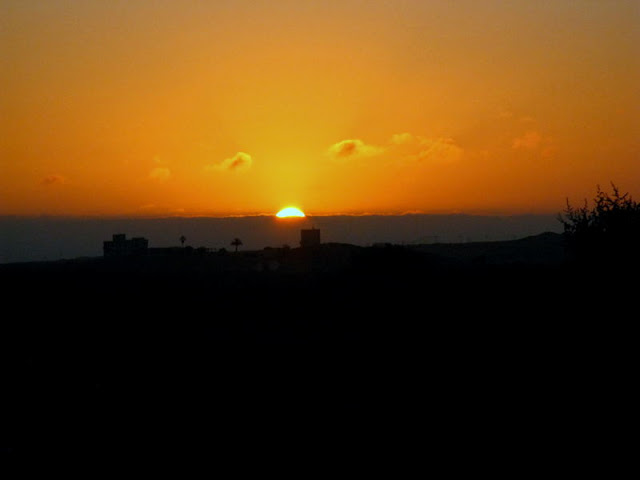