There’s this funny thing going on with the physics of light now that spring is fully underway here. The haze has finally left and days are incredibly clear. Once things got clearer and spring was here in force, we began noticing something unusual when looking at the landscape and clouds through polarized sunglasses. Everything is so much brighter, the colors so intense, and the edges so much sharper (weird as that sounds) with polarized lenses.

Remember the big scene in Contact where Jodie Foster’s character is transported to an island that is bathed in Technicolor? With polarized lenses, that’s what it’s like here (but sans beach!). We use polarized sunglasses at home but the difference between ‘with’ and ‘without’ is slight. The altitudes of Albuquerque and Windhoek are almost identical and when it’s clear here, to the naked eye, it seems just like a clear Albuquerque day. But with polarized sunglasses on, there is a profound difference from Albuquerque.

Yesterday was a clear day with just these fairy tale clouds floating around to the north and some larger ones to the south.

When I put my sunglasses on, the clouds and the city came into sharp, beautiful focus. The clouds had definition I never see through sunglasses at home. The mountains around Windhoek – even at high noon—have sharp definition. You can see the depressions and textures so clearly.

I photographed the clouds and city using a polarizing filter to see if the effect shows in photos. It’s not anywhere nearly as pronounced in a photo as it is in person but here’s what the experiment yielded:


Even the professor who is wise about the physics of light, cannot figure out what’s going on.

When we arrived in July, it was winter in Namibia. There was one blindingly bright clear day after another. But the phenomenon didn’t happen in July.  The best we can figure is that light does funny things when you are this close to the Tropic of Capricorn in southern hemisphere spring. It’s a dazzling effect and you can hardly believe it’s real. We keep flipping our sunglasses up and down just to be sure we’re really seeing what we think we’re seeing. It’s that hard to believe.

Eye candy, the professor called it.

That’s about as scientific as we’re going to get on this one. 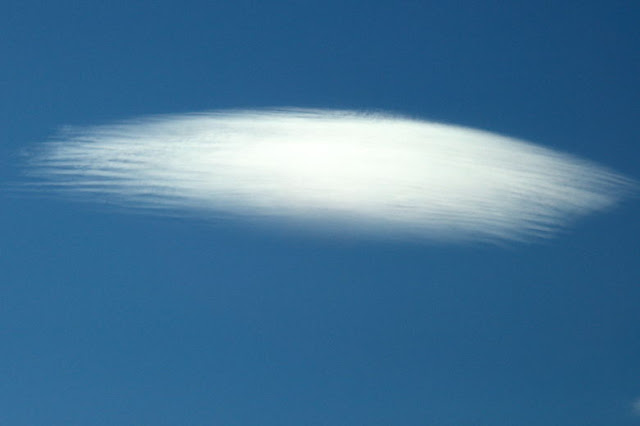