On our October trip to Etosha, we were just pulling away from a waterhole and from a distance, could see a male and female ostrich approaching our car. We decided to wait until they got closer in hopes of getting some good photos.

When they had gotten about half way to us, we could also sort of make out something smaller trailing them but much shorter and closer to the ground. We thought it might be a jackal heading to the waterhole along with the ostriches. Here’s what it turned out to be: 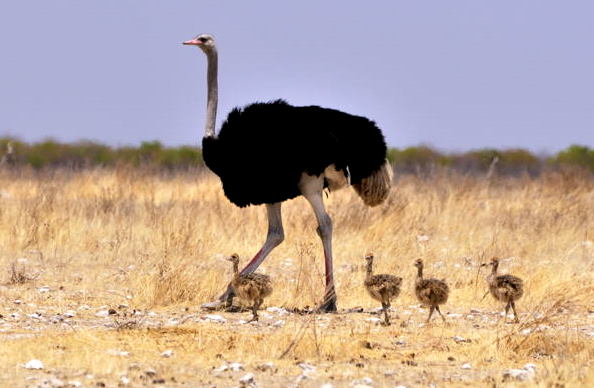 We later learned from our game drive guide, the baby chicks (he called them chicklets!) were likely only a couple of days old. Mom led the way, then dad, and finally the line of babies all heading to the waterhole for a drink.

According to our guide, the male ostrich will stay with the mother and babies to protect the chicklets that survive until they are large enough to contend with predators on their own.
1 comment: