Casper of the Kalahari

In early October, we headed to the Kalahari for the weekend. The professor had heard about the Kalahari all his life, had always wanted to see it, and was anxious to finally see its expanse of red sand and the animals that live there.

We had reservations at the Gondwana Collection’s Kalahari Farmhouse which is an easy drive from Windhoek -- pretty much straight south to just shy of Mariental, then southeast toward Stampriet. We got there at mid-afternoon. 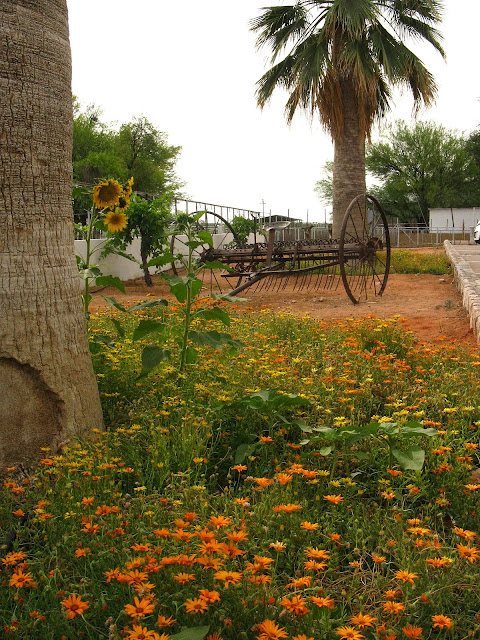 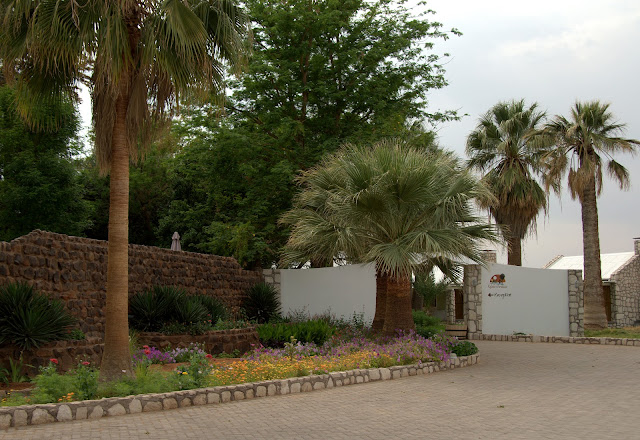 We were greeted at our car by a very friendly staff member who walked us from our car to the shady compound that housed reception. At reception, they had cold wet towels waiting for us to refresh our hands and faces after our hot drive and a tall glass of peach punch to counteract the day’s heat.


We moved our gear into one of the gorgeous little chalets styled after old Cape Dutch farmhouses. 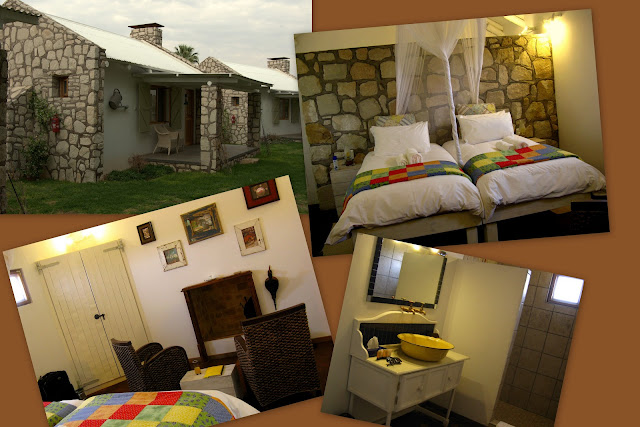 We were too late to make that afternoon’s sundowner game drive, so we signed up for the next day’s drive and retreated to the poolside patio for a cold drink and some relaxing time planning a 4x4 camping trip with our kids for January. 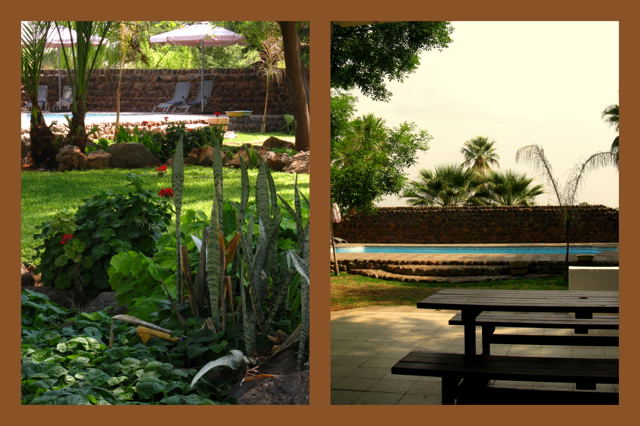 We were absorbed in measuring distances on the map when we were interrupted by a tennis ball accurately bounced just to our feet by one of the animals of the Kalahari.

Casper (whose humans pronounce it with British vowel sounds, ‘Cah-spur’) is the Farmhouse guard dog and has this routine down. Every day, new humans check into the Farmhouse and predictably fall captive to his irresistible smile and cheerful demeanor. The professor, who is a push over for all domesticated animals, happily surrendered to Casper’s wily ways. After 30 or 40 times either kicking or pitching the ball and stating firmly, “Okay, but this is the last time”, 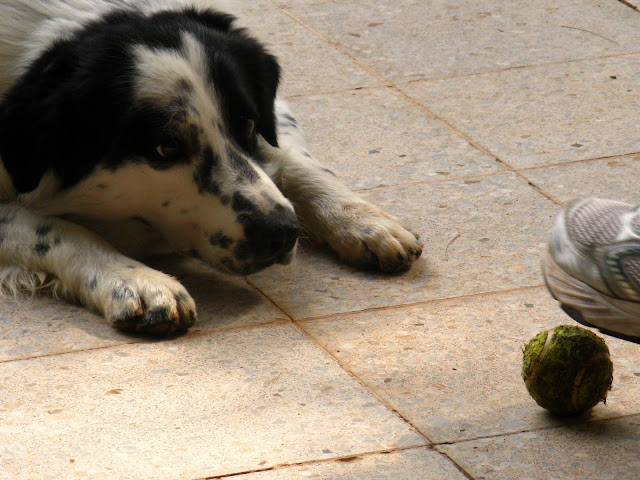 we had to retreat to a walking tour of the grounds to stop Casper from wearing himself ragged chasing his ball. Besides, new people were arriving at the Farmhouse and he needed to get them indoctrinated by dinner time.

The Kalahari Farmhouse is a working farm with its own cattle, goats, and sheep which provide both meat and milk to produce the homemade cheeses they make on site; 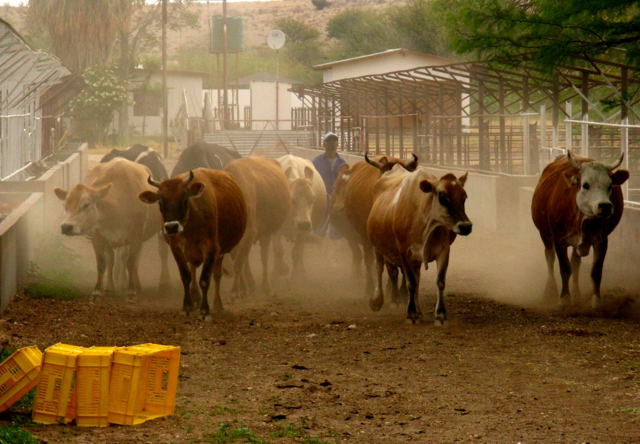 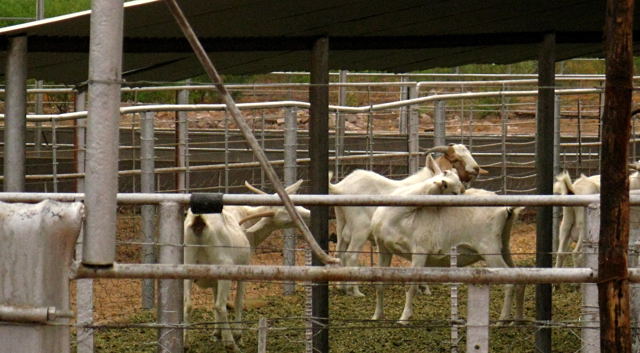 chickens who provide both eggs and meat; and a large garden where they grow all the vegetables served at meals. 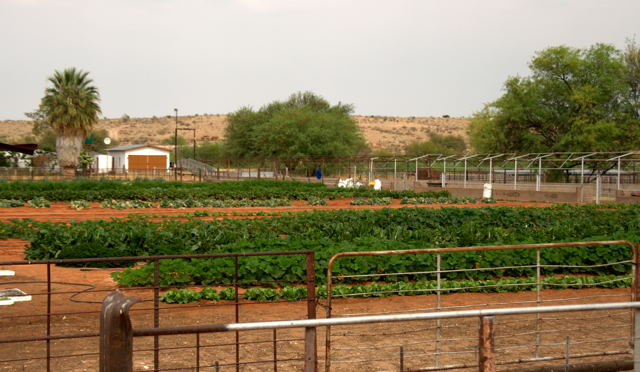 The property is ringed on one side by grape vines for sultana production.

Gondwana actively works at offering top notch training for their staff with language classes, hospitality industry, and skills training -- even sending some of them to Europe to learn cheese and bread-making with knowledgeable European artisan producers. It’s an amazing opportunity for many of these folks who can remain in their communities, have a great job with Gondwana, and learn skills they can capitalize on through their future. Too many rural Namibians don’t have those opportunities and must leave their rural communities to move to Windhoek or Swakopmund to try to find whatever employment they can to support their families.

Dinner that night was a candlelit braai buffet on the patio. There were game steaks, lamb kabobs, bratwurst, lamb chops, numerous vegetable side dishes, and a gorgeous tiramisu for dessert. 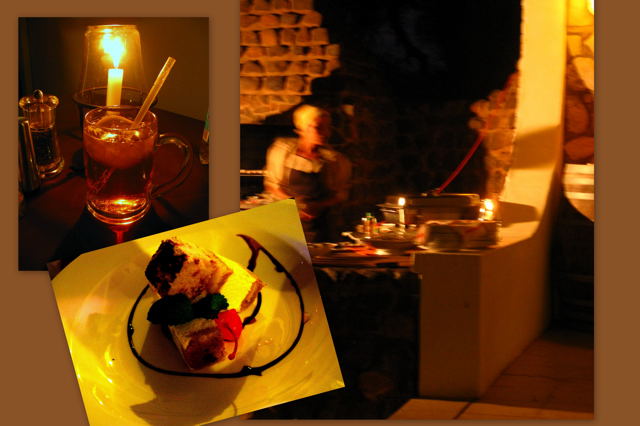 By dinner time, Casper had met and indoctrinated all the new guests. People were cheerfully popping up from their chairs during dinner to take turns pitching the ball for Casper (the professor included, of course).

After dinner as we headed back to our chalet for the night, through the darkness we could still hear disembodied voices calling out in accented English, the same phrase over and over again –“Okay, but this is the last time”.