On our second exploration day, we took an all-day game ride. With substantial breakfast sacks provided by the Lodge and jackets to ward off the cool morning air, we met our guide, Andreas, at the game truck at 6 AM. The sun was up already but you could look straight at it; the haze on the horizon was so thick it muted the sun into a pale orange-pink disk. Once underway, the mild and still cool air back at the Lodge became outright cold when rushing past you at the 100 KPH speed of the open game truck. Thankfully, there were big blankets available. We were wrapped up completely by the time we reached our first waterhole stop. And it was way too cold to venture out of the blankets to eat those breakfasts.

Andreas knew that lions liked to frequent a particular waterhole early in the morning while it is still cool. Sure enough, when we pulled up, there were about 6 of them at the waterhole, some out closer to the herds of springbok and zebra who had come to drink, and others guarding the waterhole itself. Needless to say, none of the springbok, zebra, or oryx wanted to stray too close to the lions so they didn’t risk a drink and instead, kept sharp focus on the lions. 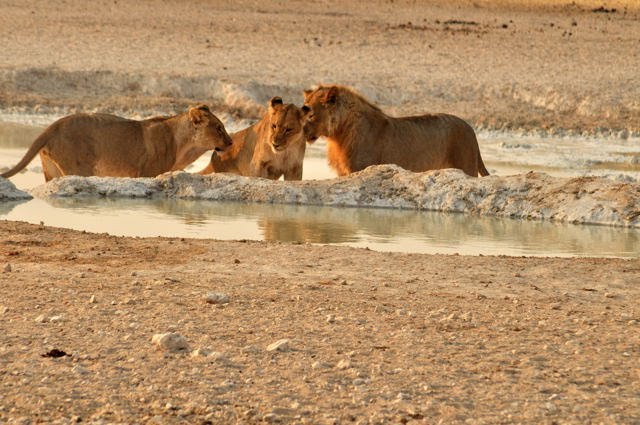 Andreas thought this was a young lion pride and possibly were siblings. The males’ manes were just beginning to grow. They didn’t seem too organized at first. Some were stationed out closer to the herds of animals, others like office workers, congregated at the water fountain, gossiping and recalling early childhood antics. 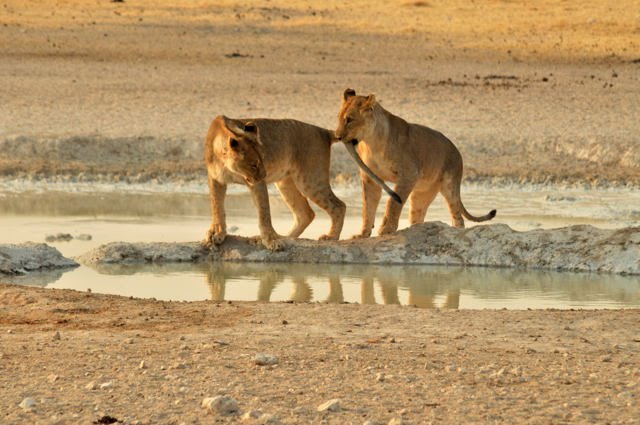 Eventually, they settled in and took up a more deliberate watch. 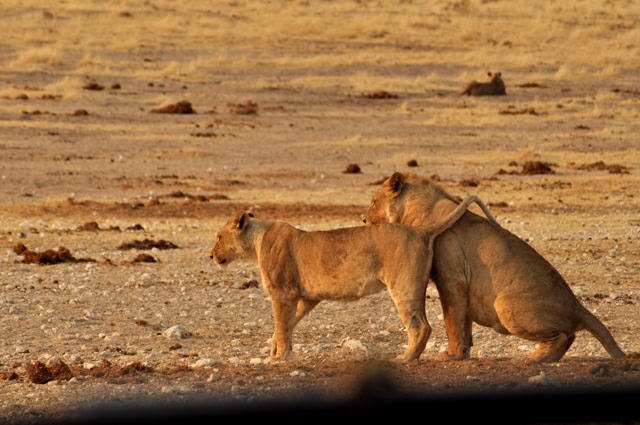 The lions didn’t seem eager to waste their energy on charging long distances after any animal, but waited until there might be a misstep or an easy way to isolate a single animal. The oryx and springbok were really thirsty and you could see that they wanted to know just how far they could push the lions in trying to get to the waterhole for a drink. Every once in a while a member would step a little closer to test the waters so to speak, but the lions were alert and no one wanted to take the chance of turning their backs on them at the waterhole. 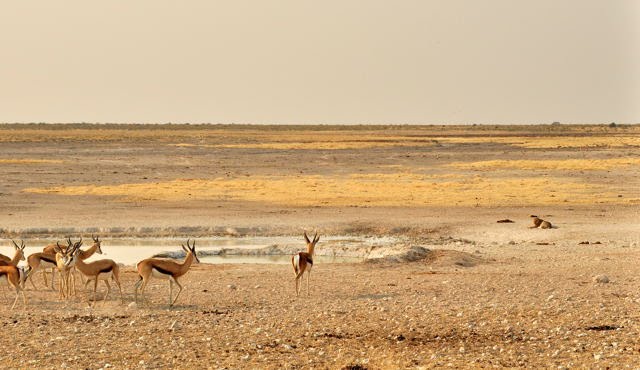 So the springbok waited and passed the time with their own springbok bravado and water fountain antics. 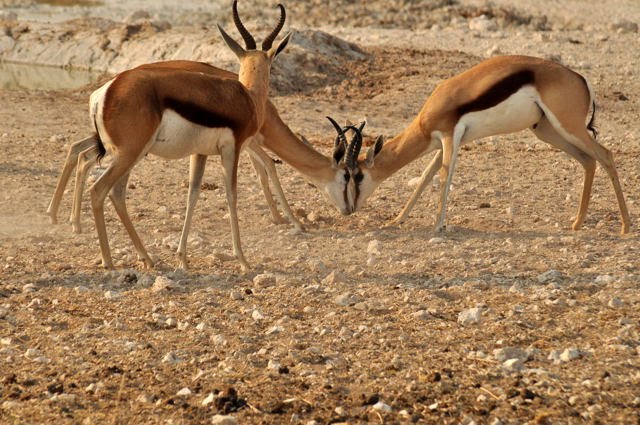 While all this stand-off was going on, a pied crow, who also didn’t want to risk a drink in these circumstances, hopped along the tops of pick-ups and campers amusing himself by barking out a little pied crow song. 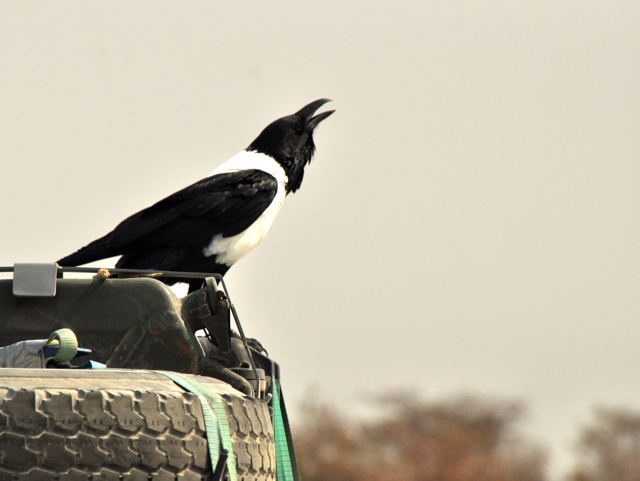 A resolution to this stand-off didn’t seem imminent so we moved on to other watering holes.

The next watering hole was at the end of a long turn off from the main road. The woods were filled with helmeted guinea fowl moving in sinuous lines through the brush. They reminded me of the little girls in the Madeline stories, all moving rapidly together in long single-file lines. The guinea fowl make their characteristic calls as they move in swarms. But as we got closer to them, they seemed to be much more alarmed and were moving more erratically and chattering loudly! As we pulled to a stop, we looked from the parking area up into the woods to see if there was any reason for their agitation. A leopard was moving through the woods on its way to the waterhole. 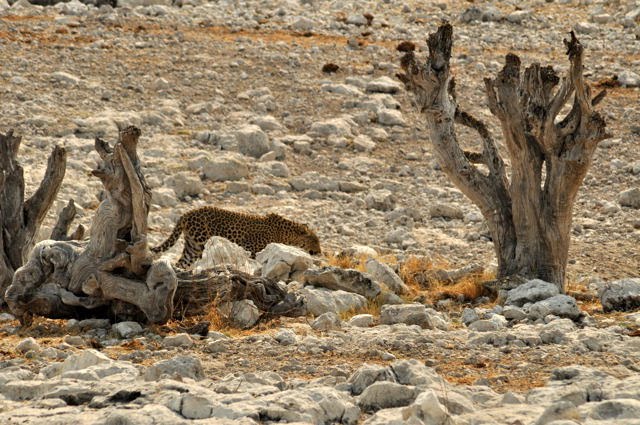 Animals that could be prey have a tendency to approach a waterhole somewhat tentatively. They know predators could be anywhere. Not so with this leopard. He moved confidently to the waterhole and drank until he was satisfied. 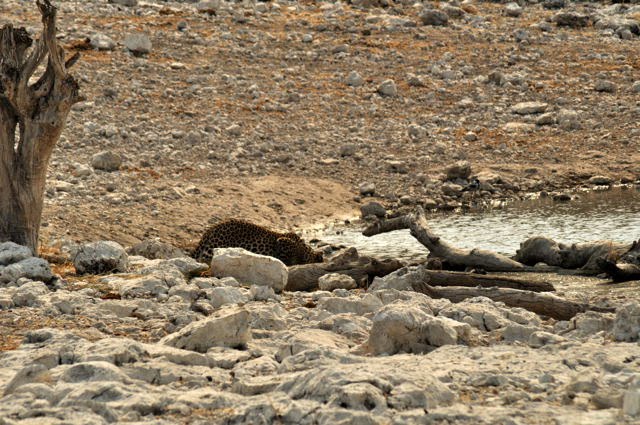 Then, he calmly settled himself in the shade of the solar collector for a nap. 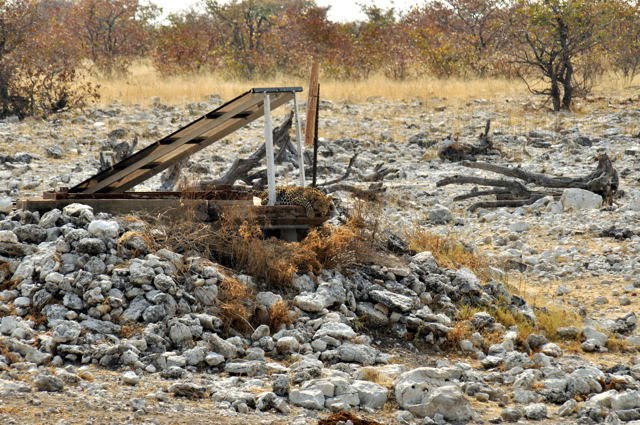 A mating ostrich pair had just ended their tryst when the male spotted the leopard now resting in the shade of the solar collector. That focused his mind away from sex in a flash. That ostrich stood stock still and didn’t take his eyes off the leopard. Andreas said that if the leopard is not hungry he shows the white tip of his tail – which is what this leopard was showing–but if he is hunting, he holds his tail down and you cannot see the white tip. The male ostrich, having been otherwise engaged when the leopard arrived, either missed or never knew that signal, so wasn’t about to lose his focus again. In the meantime, wart hogs trotted out of the woods to the far end of the waterhole for a quick drink and then back to the woods; ducks decided they could risk a swim; and a few springbok took tentative sips at the far end. When we left, the leopard was nearly snoozing but the ostrich was still riveted in place, the stakes apparently too high to do otherwise and I presume, all amorous thoughts wiped completely from his mind. 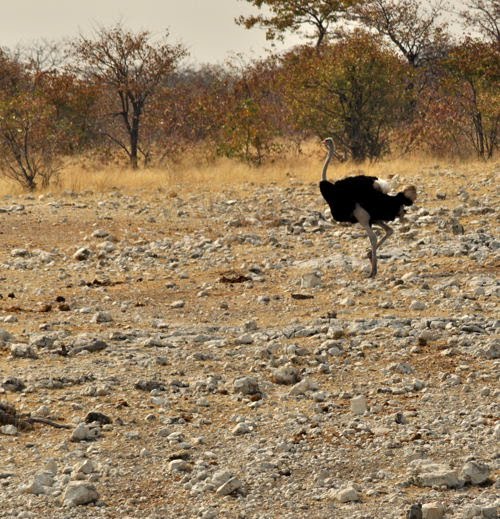 We traveled back to Okaukeujo where Andreas left us for an hour and a half break for lunch. We finally opened our breakfast sacks which worked just as well for lunch while we watched animals big and small at the Okaukeujo waterhole. 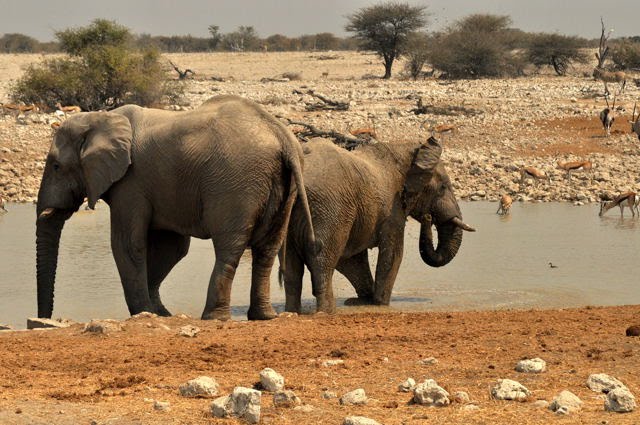 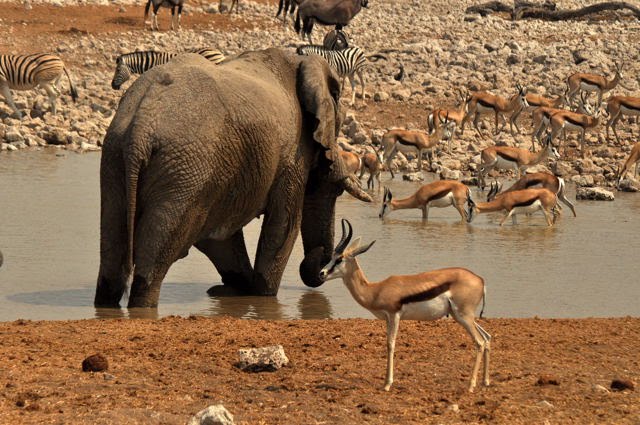 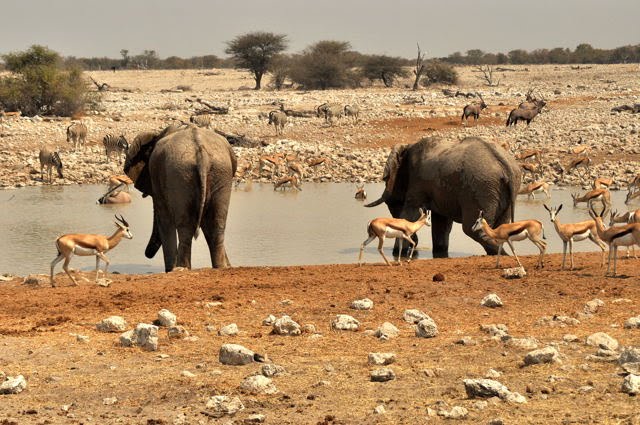 After our lunch break, it was back to the first waterhole of the morning. Three or four of the lions were still out. Andreas speculated they were very hungry to be out in the mid-day heat like that. They were up and about more and hoping to force a situation. A lot more animals were milling around the waterhole. 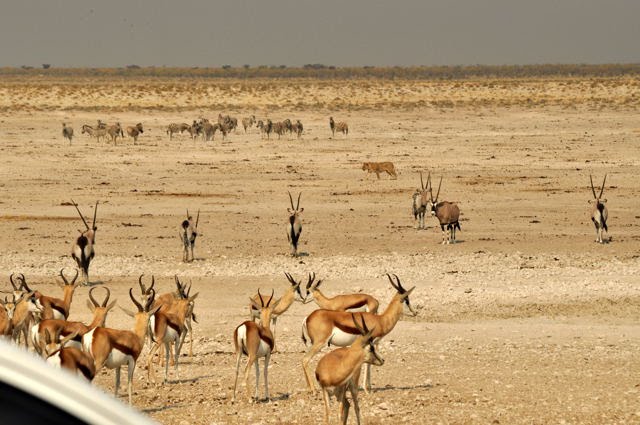 They all were keeping a big distance between themselves and the lions. Seven or eight giraffes were at the waterhole looking as thirsty as the others. 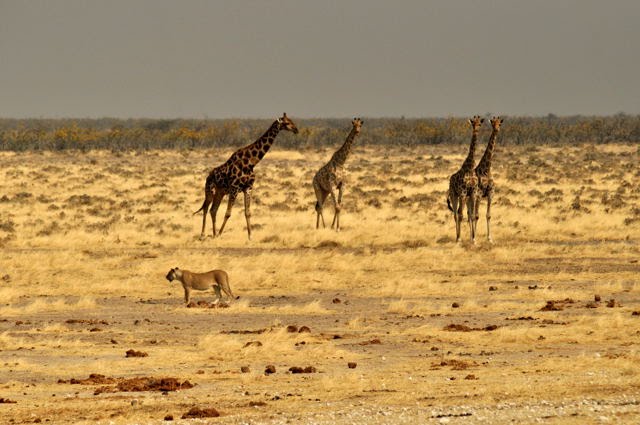 It didn’t appear there would be a breakthrough any time soon. But a few minutes later, these guys arrived. 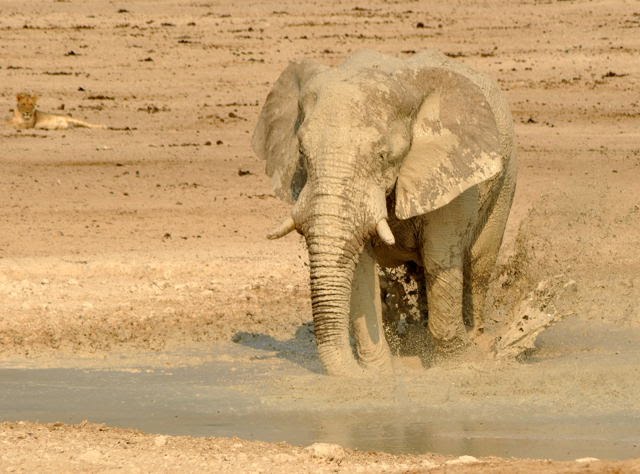 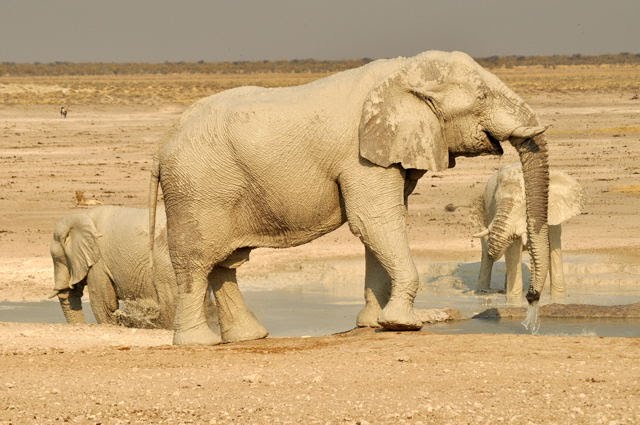 We didn’t see much more at waterholes the rest of the afternoon but saw these guys watching us on our drive out of the park. 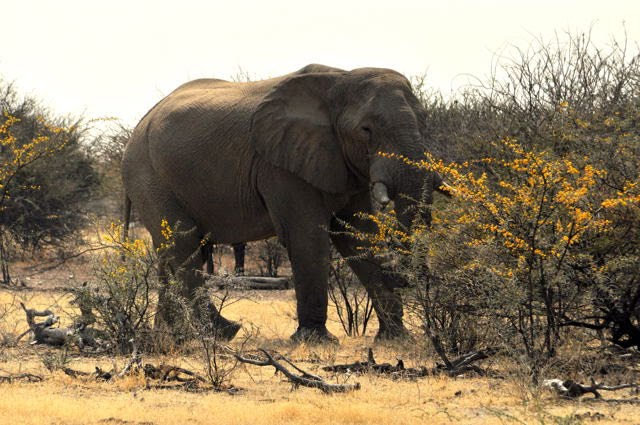 And this day, just as the day before, we saw this guy on one side of the road as we left. 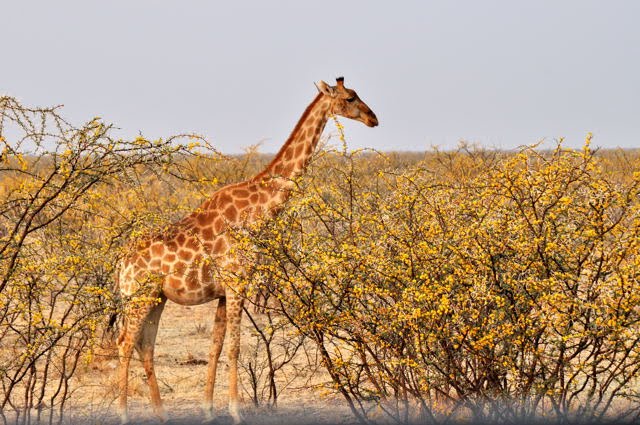 And this elephant family on the other. 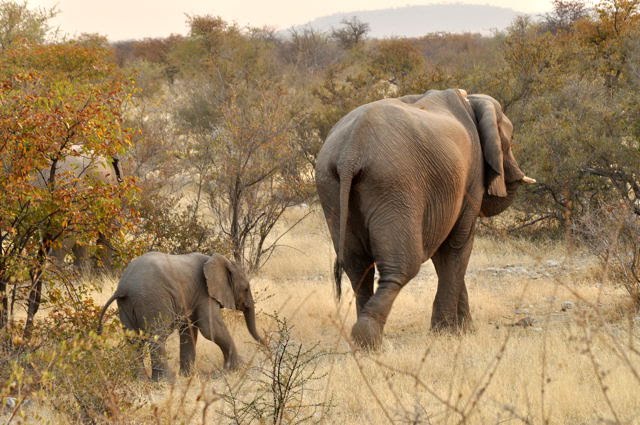 As we arrived back to the Lodge, the same haze that rendered the sunrise pale, altered the setting sun equally dramatically. 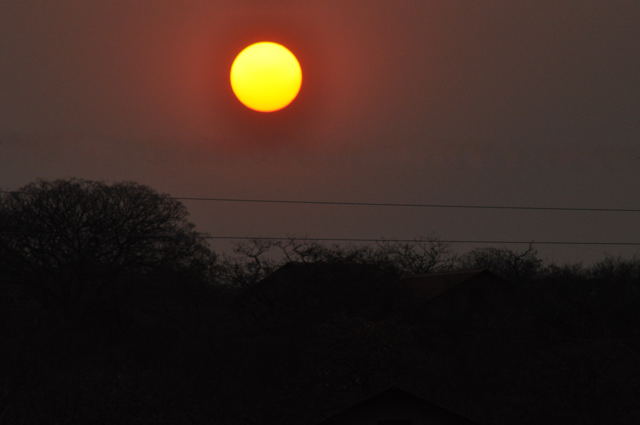