On our November trip to Etosha, the professor’s new telephoto lens was finally working correctly so I did most of the driving, allowing him to maneuver into position to take great photos.

(See the results at:  http://www.flickr.com/photos/bob_and_lynn/)

Because you cannot get out of your car in Etosha, my photographic vantage point was constantly obscured by the professor and his new lens.

I entertained myself by photographing other things.

I am always amused by the Africa-specific hazard warning signs on the road to Etosha. 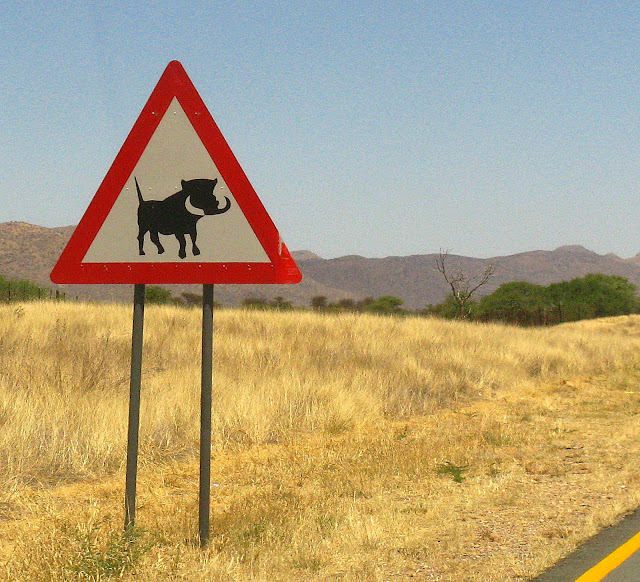 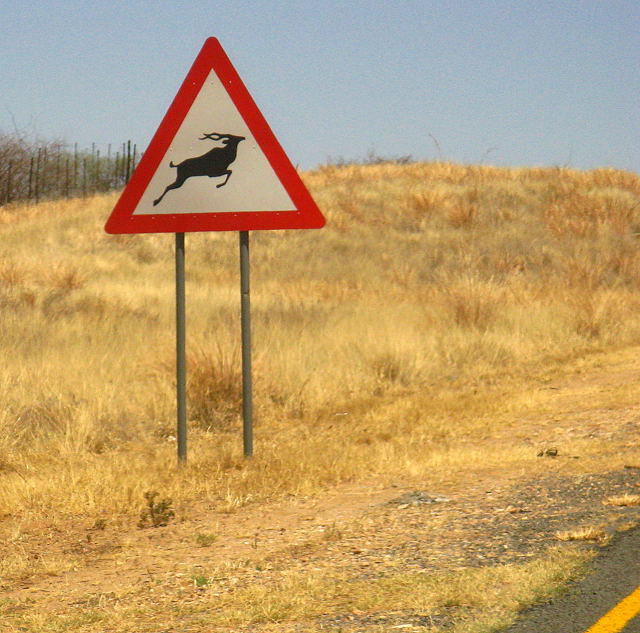 We can personally attest to the hazard warthogs can be while playing chicken with a speeding car. And equally scary, from seemingly nowhere, kudu and oryx can dart in front of your car at any time.

Etosha was still very dry on this trip. 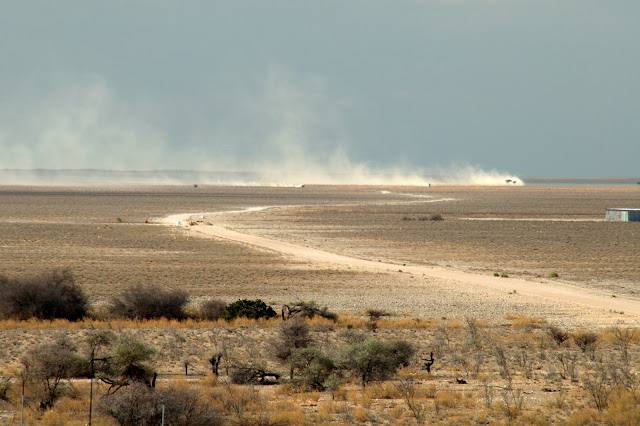 The mopane trees – obviously highly adapted to drought – were leafed out in bright green foliage, 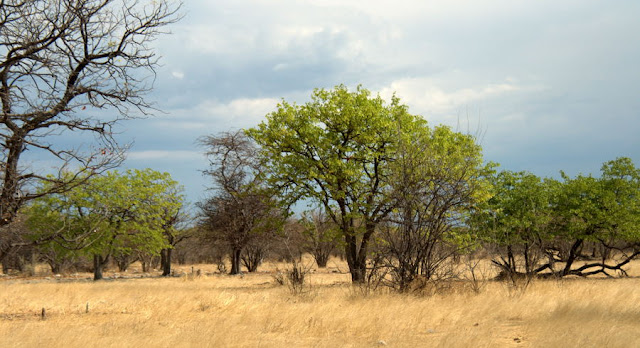 but the animals remain stressed as water is still only available at waterholes. Water levels appeared to be lower than they were a month ago. There were cool days on this trip with welcome cloud cover and rain showers in the afternoons. 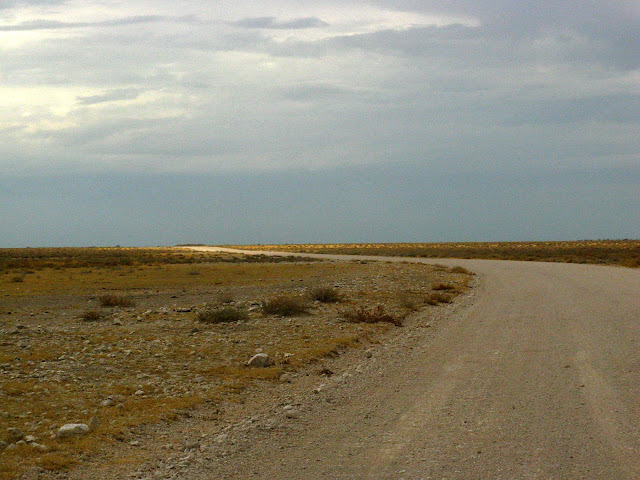 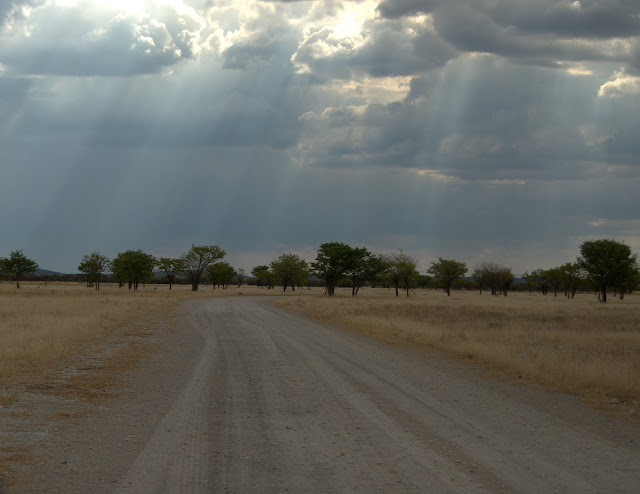 At first, I just found small things to photograph.

This amazingly colored masked weaver was busy alternately flashing his mating display and gathering just the right pieces of grass for the new nest he was building. 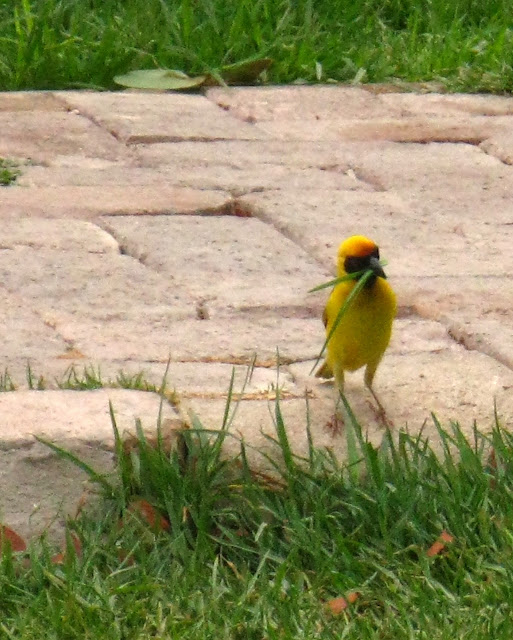 This ground squirrel could have been straight out of central casting for the Disney Channel. 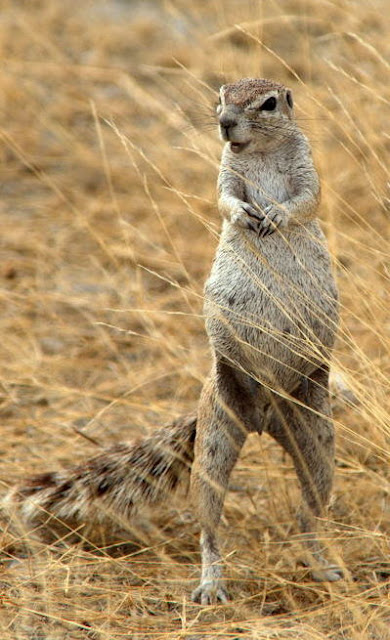 Father ostriches were herding “chicklets” into easier to defend clusters. 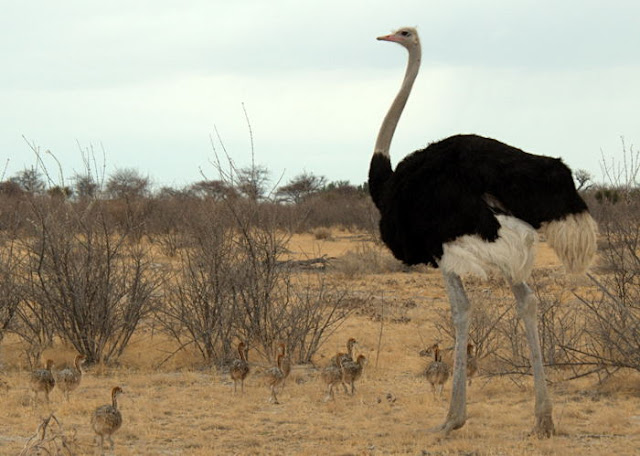 A secretary bird in the middle of a rain shower was intently looking down, surveying for lizards. 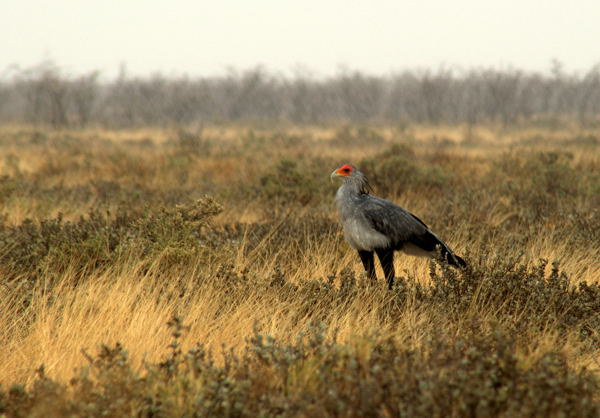 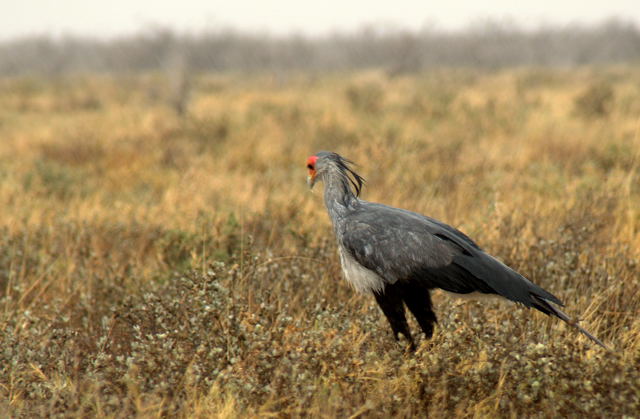 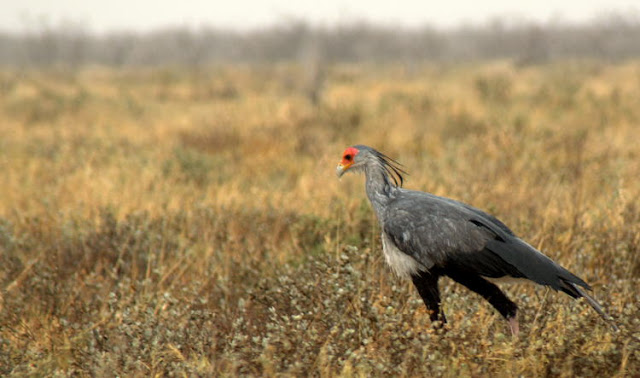 I decided it would be fun to do a series of views from my side mirrors. Here’s a mirror reflection I will never get to see in Albuquerque! 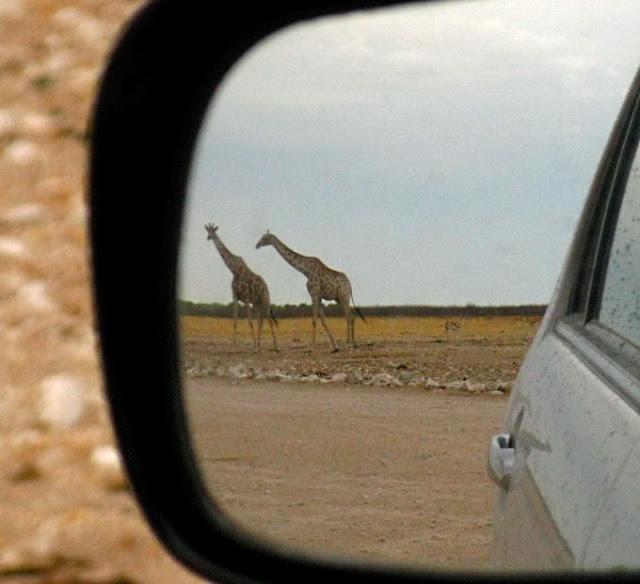 We later happened upon a giraffe munching on thorn bushes no more than 20 feet from us. Here he’s noshing on a bush just outside the passenger window. 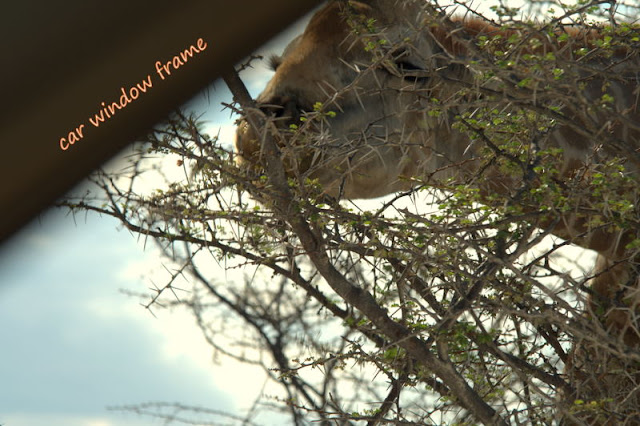 He saw us but it didn’t faze him. He just kept filling his cheeks with thorns, the very tiny leaves from the bushes, and twiggy branches. 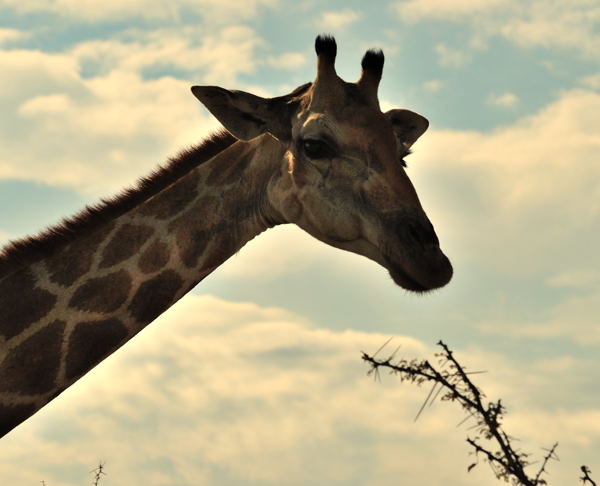 We could see a group of three bull elephants in the distance so decided to wait to see the path they would take on the way to a waterhole. They passed right between a group of cars that pulled off to watch them. The photos don’t do this sight justice. These are huge animals. 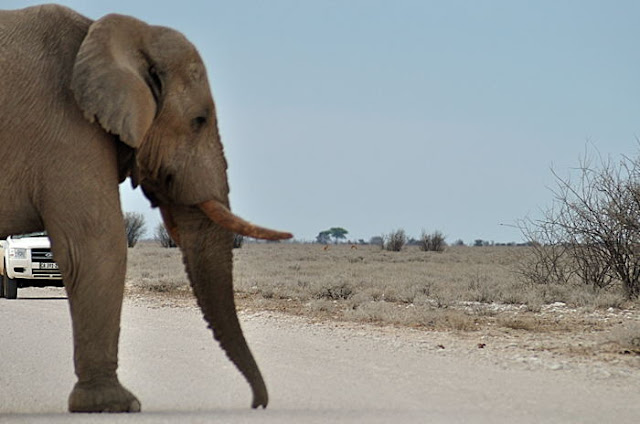 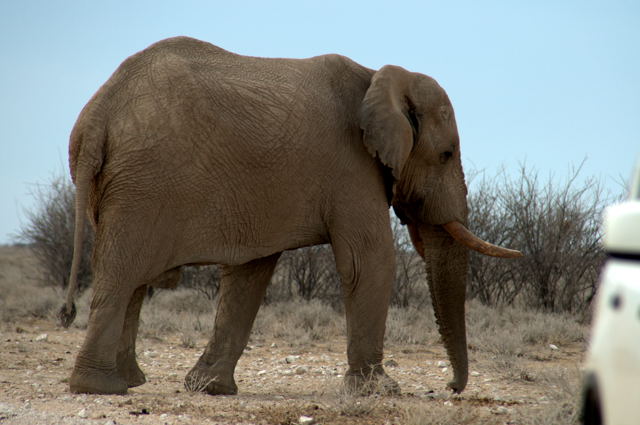 I found this group of springbok taking a break in the shade of a thorny acacia tree. 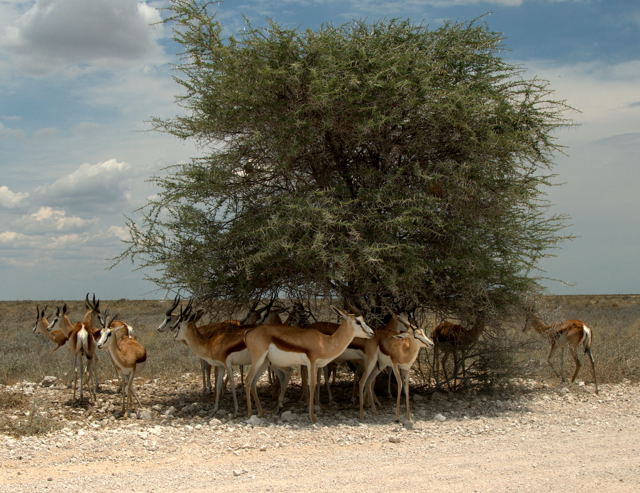 A couple of them were practicing their mirror image trick. 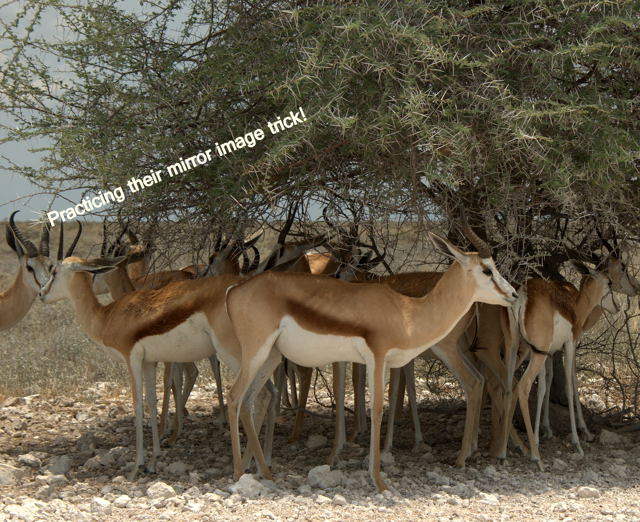 But then it all went horribly wrong. 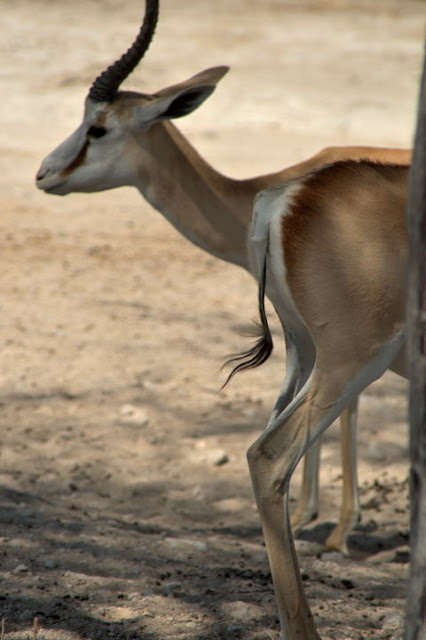 They should have paid closer attention to these impala who have perfected the art! 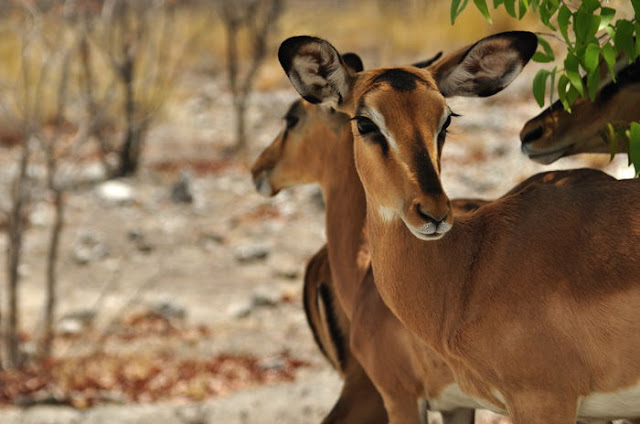 Animals with a sense of humor – I’m always on the look-out for them.


At the end of our first day, the clouds lifted from the horizon enough to yield yet again, an unbelievable sunset. 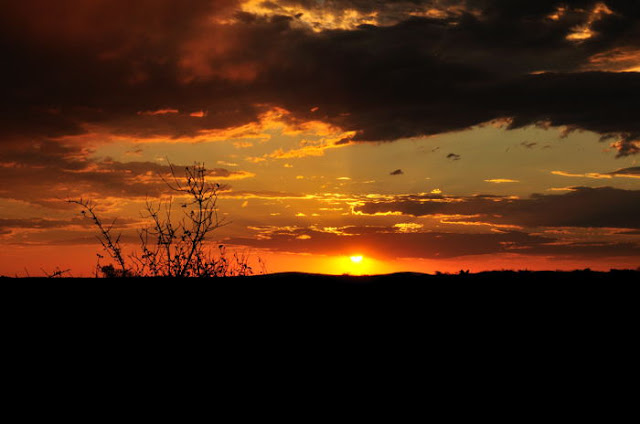 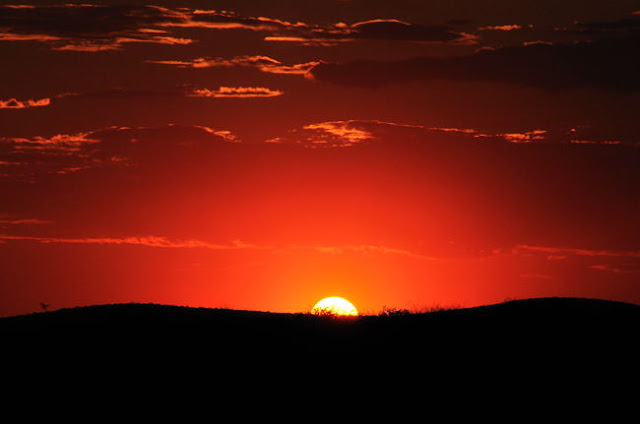 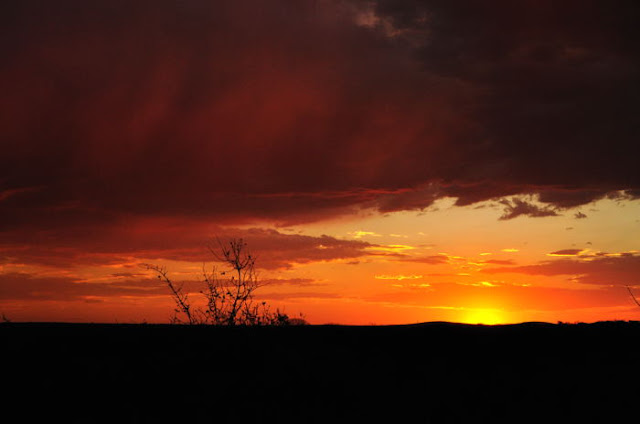 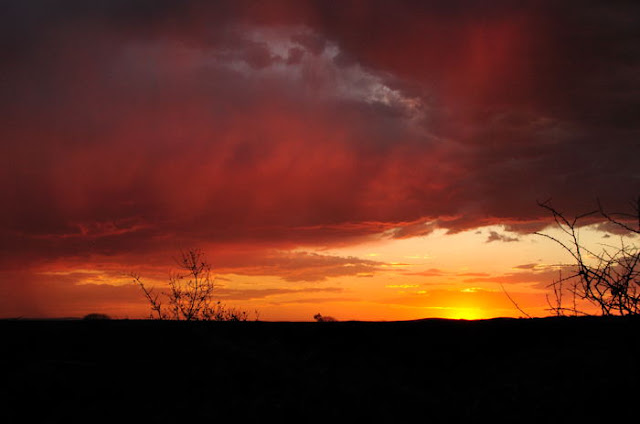 This going to Etosha thing could become addictive.
3 comments: