After two pretty full days at Etosha, we thought we would kick back a little and take it easy on our final day, maybe just hanging around the waterhole all day at Okaukeujo. We took our time over breakfast and arrived at the waterhole about mid-morning. A maternal elephant group was already drinking when we arrived. 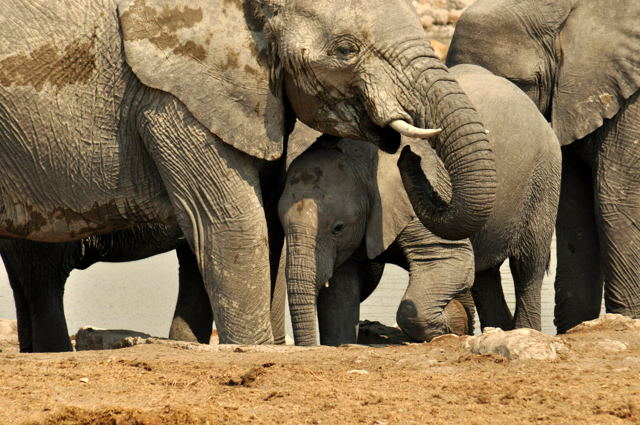 They were crowded around the inlet where the fresh water emerges, drinking to their heart’s content. 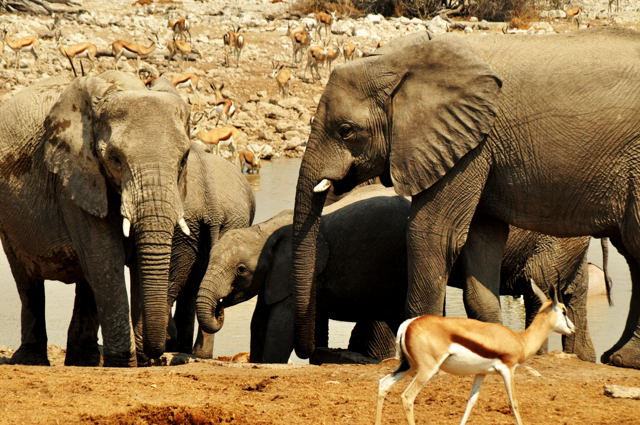 Thrilling for me, they had a baby with them. 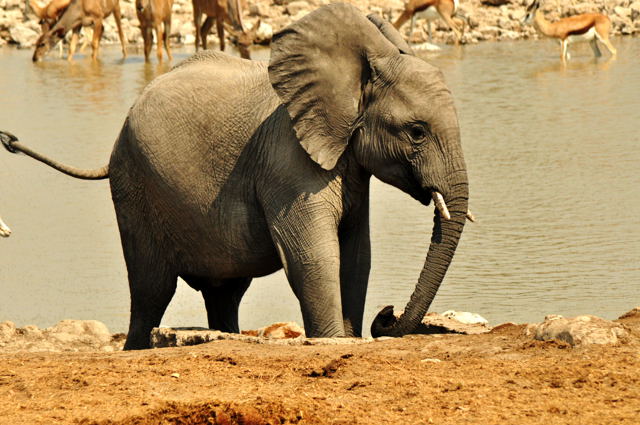 I’m no judge of elephant ages, but this little one didn’t look more than a year old. Baby elephants are a favorite of a good friend of mine as they are for my daughter and me, so I took lots of baby photos to satisfy all three of us! 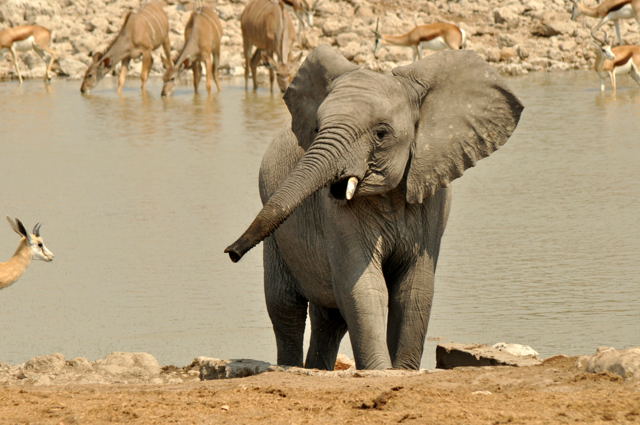 It was clear this was a beloved baby to her/his family. 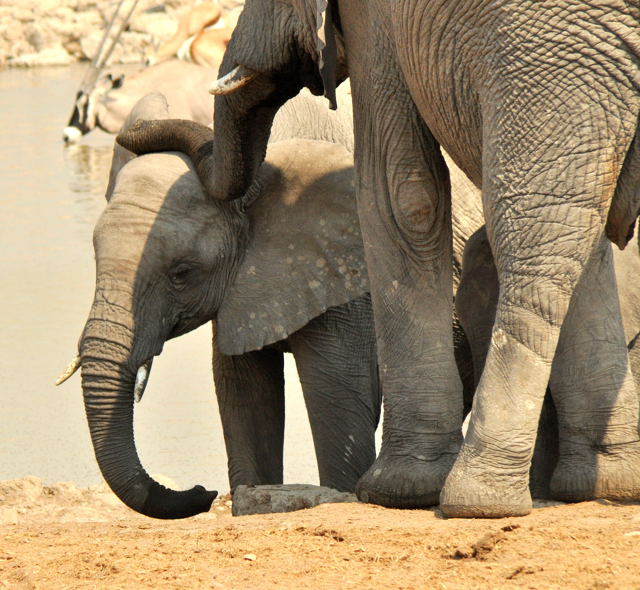 The elephants drank their fill and when what appeared to be the mom or grandmother started to leave the waterhole, the baby dutifully followed  immediately right behind her. The baby’s older siblings lingered at the waterhole for a good while longer.

As it turns out, the professor, with what is downright freakish hearing capability, seems to be able to hear some of the elephants’ low frequency communication (at least that’s his story). Once the mom disappeared from sight, the professor said he could hear the communication coming back from her to the group of three youngsters still hanging out at the watering hole. It certainly appeared that was the case because just as he said that, the two eldest of three adolescents started to the bush to follow mom. They turned back and saw the youngest sib still drinking and blowing bubbles so they trotted back to get their sibling in what clearly had to be a “you’d better get moving –you’re going to catch from Mom if you’re not out of here now!’ moment. One more slurp for good measure and all three hightailed it back to the brush to catch up with mom and baby. Recalcitrance in teenagers seems to be universal throughout the animal kingdom.

The waterhole was busy that morning with lots of bok and zebras. 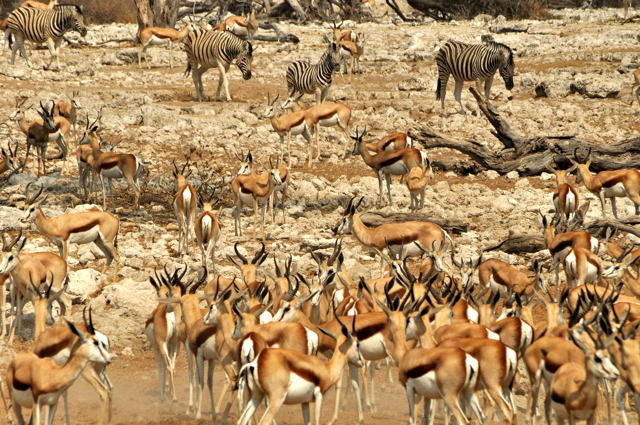 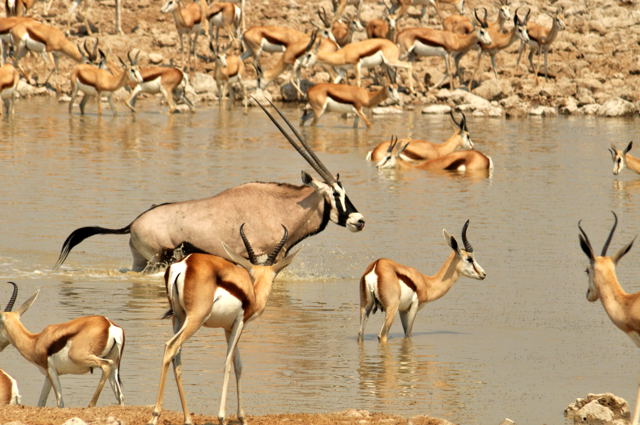 And deep enough to wade in up to your shoulders. 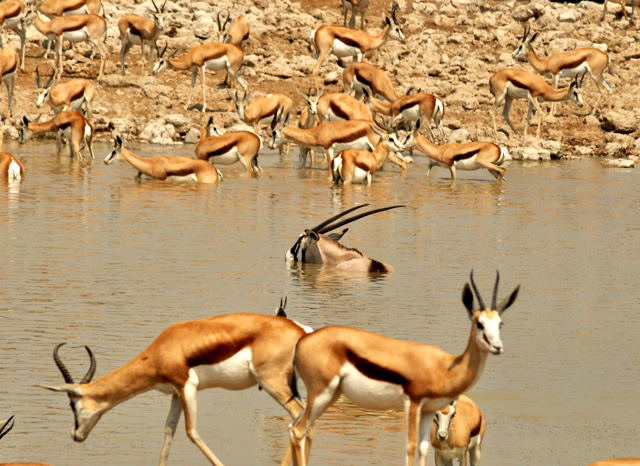 The giant weaver bird nest next to the watering hole pulsed constantly with rapid fire arrivals and departures. A few of the weavers got sidetracked by a discarded cookie they found on the sidewalk. 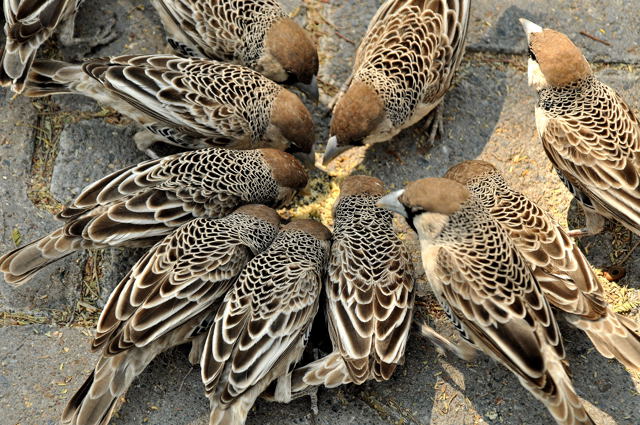 Carbohydrate loading must be necessary for building those high rises of theirs.  It’s amazing animal engineering. 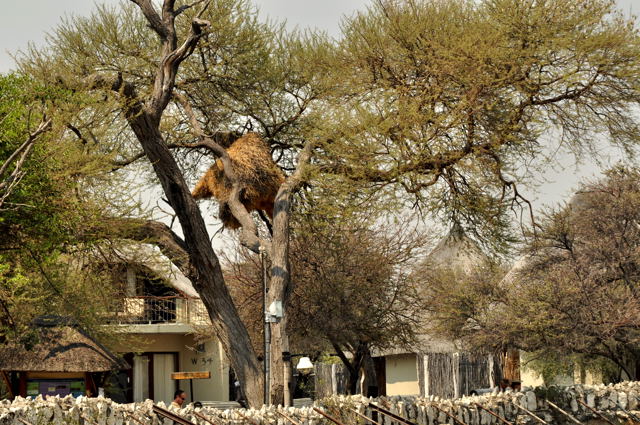 A single Red billed quelea just watched from a nearby rock. 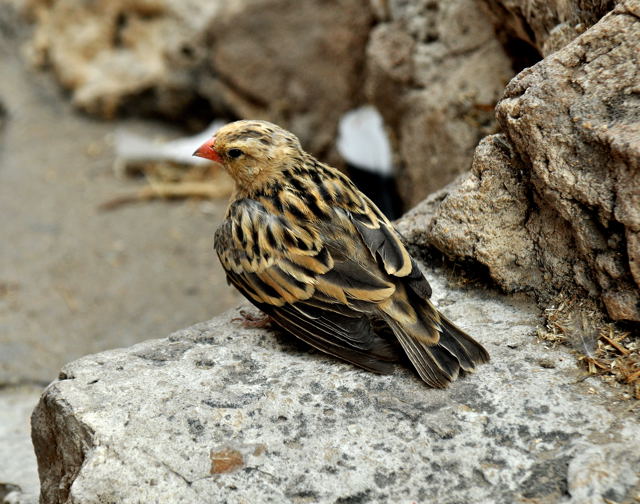 Once the elephants left and things quieted at the waterhole, we decided to drive out to other nearby waterholes to see what might be there. Turns out it was a quiet day while we were there with not much happening – just some peaceful secretary birds joining a springbok for a drink. 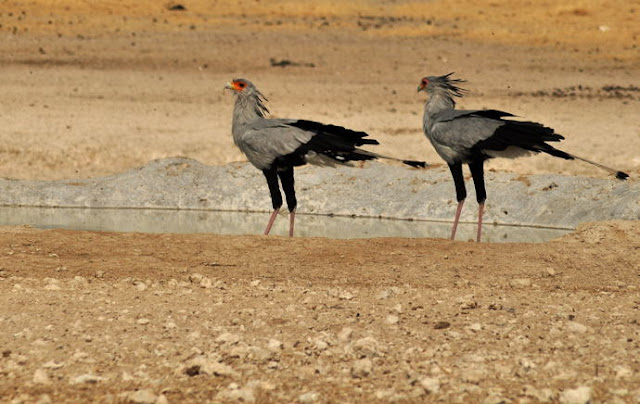 We drove much of the afternoon not really wanting to give up on this vacation.

Watching giraffes approach from far away draws attention to the movement of their necks necessary to balance their gait. 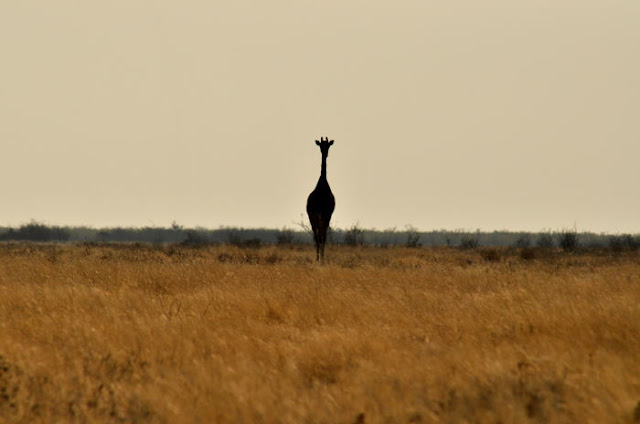 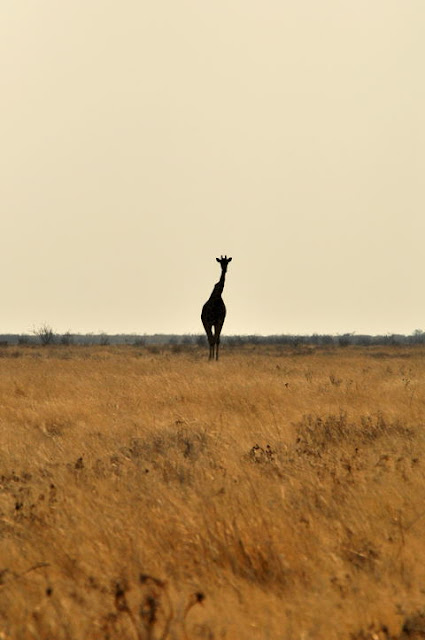 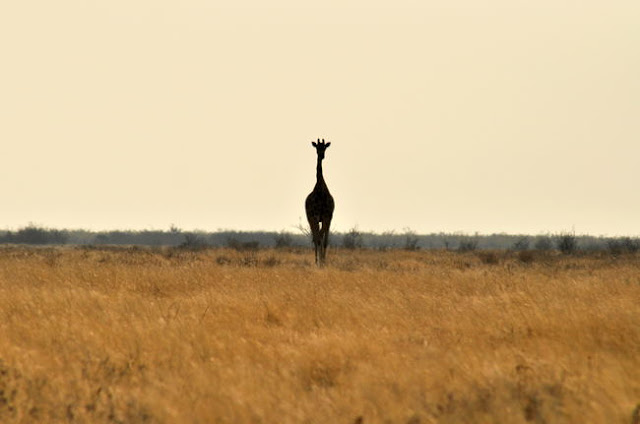 They look pretty small on the horizon but when they finally arrive, they are huge! 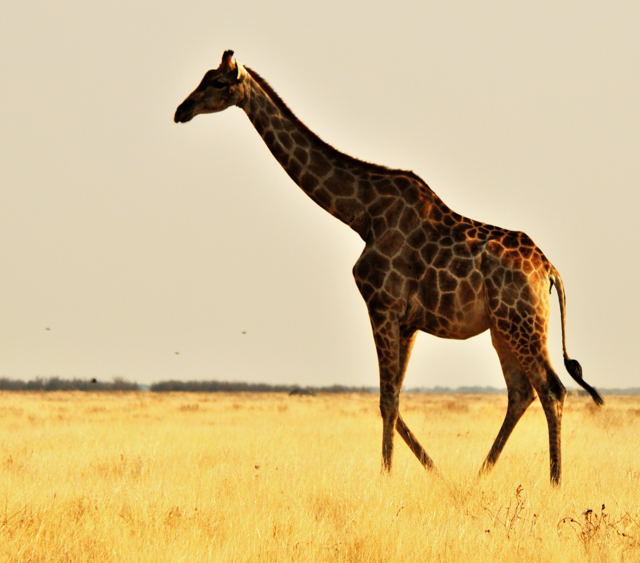 If it’s not a great animal watching day, it’s always a good birding day with some 360+ bird varieties known to frequent Etosha. Even I, who has no real talent for seeing birds in their environment, was able to spot some real beauties.

We circled back to Okaukeujo but found the waterhole empty 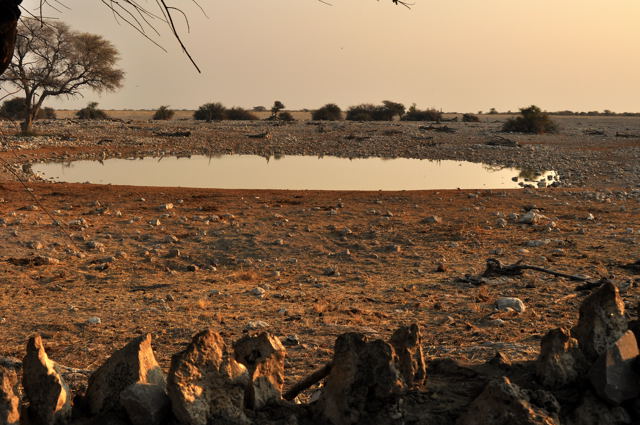 except for a single Blacksmith plover edging in for a drink. 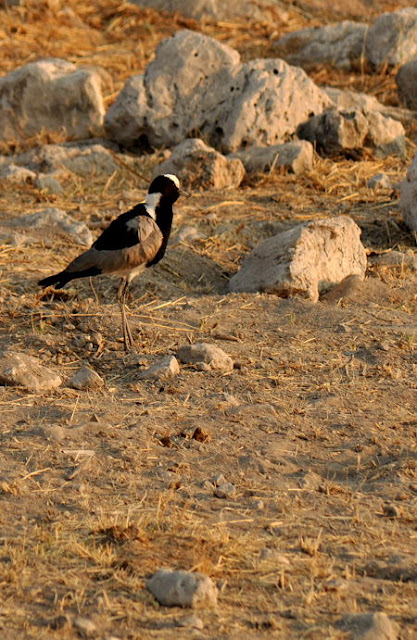 As we departed a final waterhole just before the gate, the sun was going down and the ubiquitous haze turned it into a postcard African sunset. 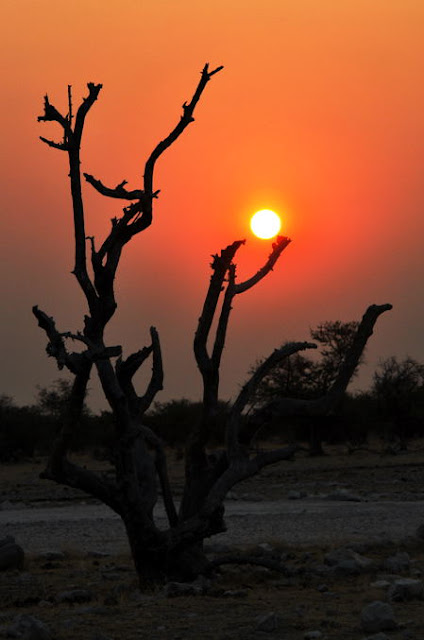 On the way back to the Lodge we saw this gorgeous steenbok at the side of the road. Generous with its time, it posed for any and all who stopped to look at him. 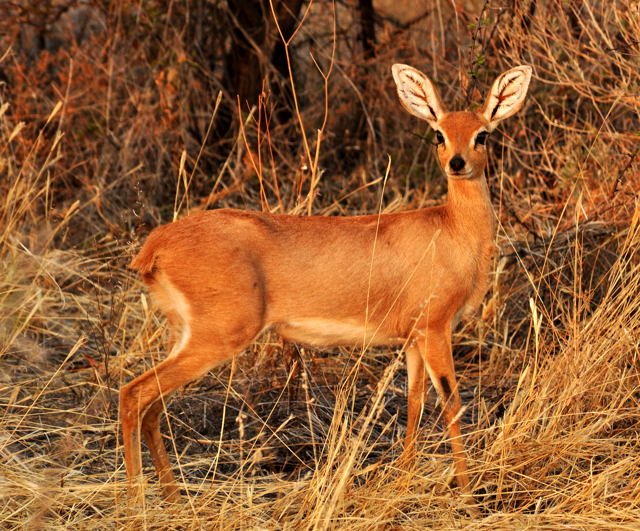 It was deep twilight when we made it back to the Lodge. Our little cabin beckoned us in 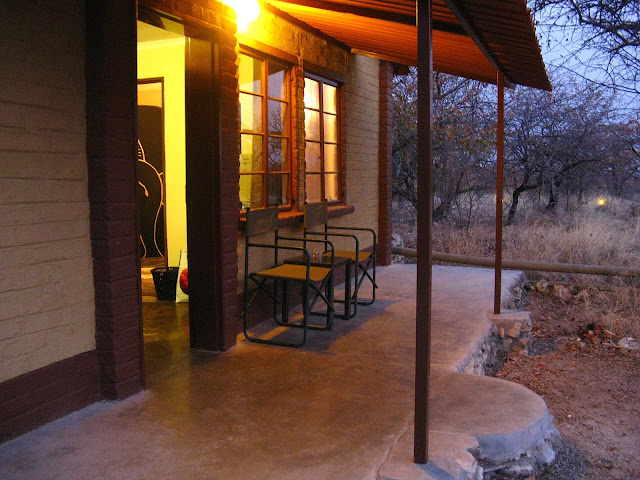 and after a quick rest, it was off to our final dinner and entertainment evening. 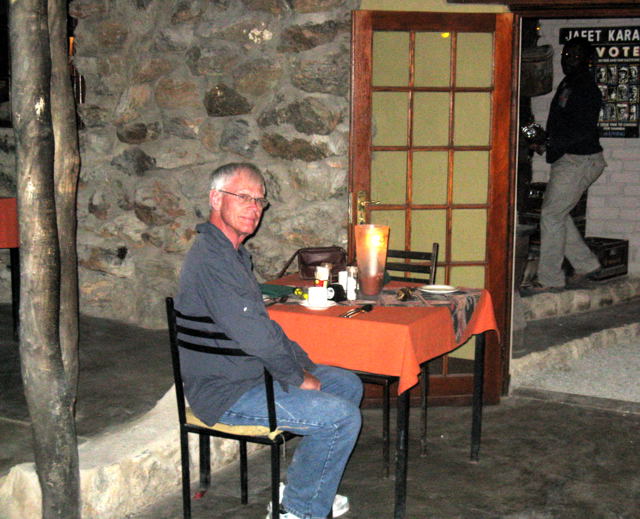 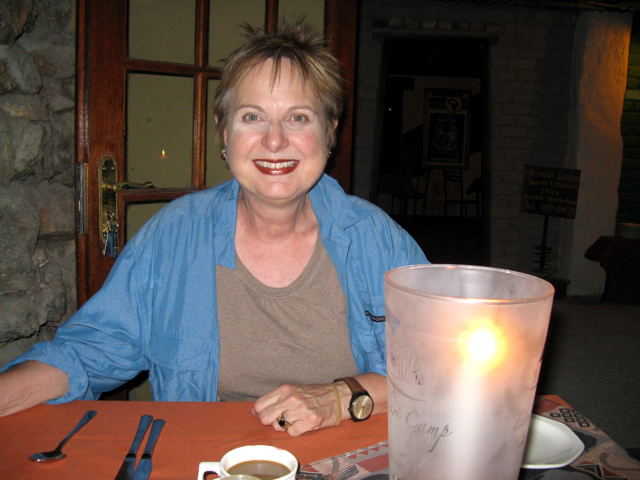 The next morning, we walked down the path to our last sunny breakfast on the patio. 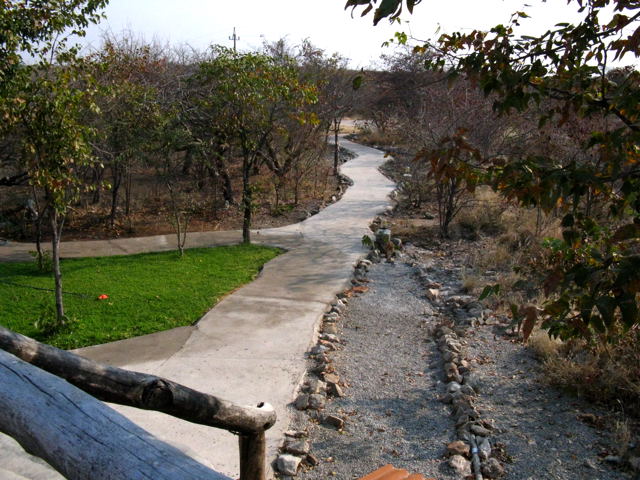 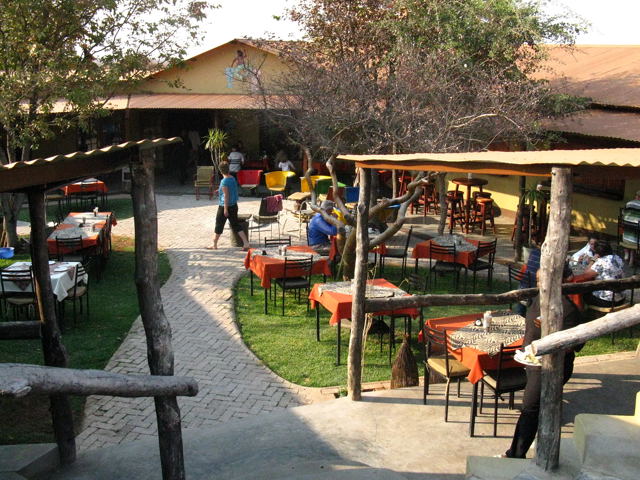 We hated to leave but Polytechnic classes were beginning again in two days and the professor had notes to write.

Reluctantly, we turned onto the highway back to Windhoek, stopping only briefly for fuel and a quick photo of the too numerous to count termite mounds that dot the landscape from Windhoek almost all the way to Etosha. 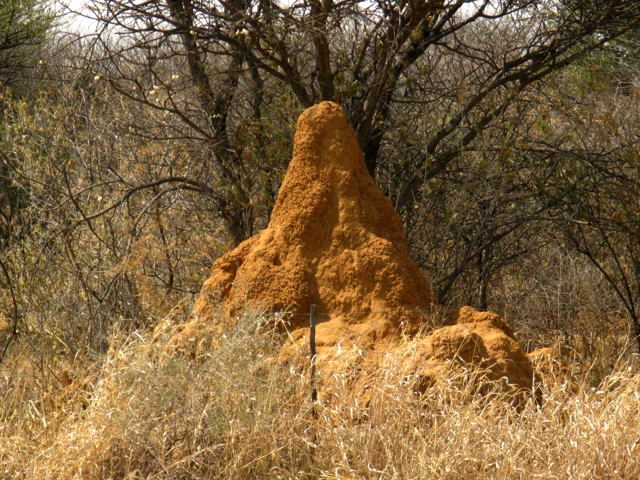 On our arrival home, the guards at the gates greeted us with big smiles and said they hadn’t seen us in a while but now realized we had been to Etosha.

There was no hiding the evidence. 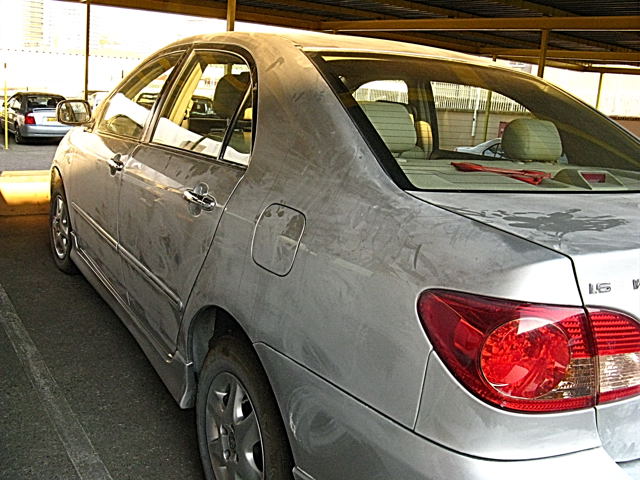